As we noted last night, for a whole lot of time nothing at all can happen under the guise of “containment”… and then everything happens all at once. Because not even two full days after Greece activated the “Grexit” emergency protocol, leading to capital controls, and a frozen banking system and stock market, moments ago the NYT reported that the default wave has jumped the Atlantic and has hit Puerto Rico whose governor Alejandro García Padilla, saying he needs to pull the island out of a “death spiral,” has concluded that the commonwealth cannot pay its roughly $72 billion in debts, an admission that will probably have wide-reaching financial repercussions.

In other words, first Greece, and now Puerto Rico may be in a state of Schrodingerian default. Why the ambiguity? Because while Greece is not technically in default until July 1, Puerto Rico does not even have an option to declare outright default. But that doesn’t mean that the commonwealth will service it.  Quoted by the NYT, García Padilla said “The debt is not payable.” He added that “there is no other option. I would love to have an easier option. This is not politics, this is math.”

Funny: math went out the window in 2009 when central bank “faith” took over. The problem is that faith has run out, as has the “political capital” to keep an insolvent global system running, and first Greece now Puerto Rico are finally realizing it.

As the NYT adds, this is “a startling admission from the governor of an island of 3.6 million people, which has piled on more municipal bond debt per capita than any American state.”

A broad restructuring by Puerto Rico sets the stage for an unprecedented test of the United States municipal bond market, which cities and states rely on to pay for their most basic needs, like road construction and public hospitals.

That market has already been shaken by municipal bankruptcies in Detroit; Stockton, Calif.; and elsewhere, which undercut assumptions that local governments in the United States would always pay back their debt.

The immediate implication, as accurately presented by the NYT, is that Puerto Rico’s call for debt relief on such a vast scale could raise borrowing costs for other local governments as investors become more wary of lending. Indicatively, Puerto Rico’s bonds have a face value roughly eight times that of Detroit’s bonds.

What is worse for the illusions that is US “capital markets” is that virtually all the same hedge funds who are long Greece on hopes of some central bank bailout, are also long Puerto Rico. As such, while tomorrow most will be spared… 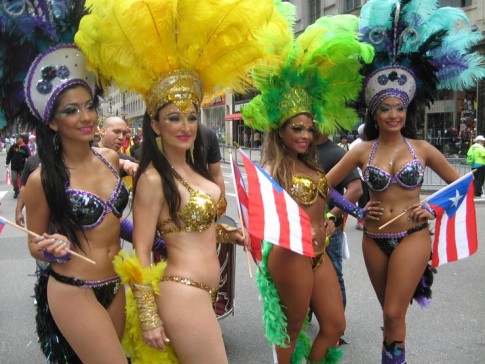 … some of the most “respected” US hedge funds will suffer a gruesome bloodbath.

What happens next is unclear: “Puerto Rico, as a commonwealth, does not have the option of bankruptcy. A default on its debts would most likely leave the island, its creditors and its residents in a legal and financial limbo that, like the debt crisis in Greece, could take years to sort out.”

So without the “luxury” of default, what is PR to do? Why petition to be allowed to file Chapter 9 naturally: after all everyone is doing it.

In Washington, the García Padilla administration has been pushing for a bill that would allow the island’s public corporations, like its electrical power authority and water agency, to declare bankruptcy. Of Puerto Rico’s $72 billion in bonds, roughly $25 billion were issued by the public corporations.

Some officials and advisers say Congress needs to go further and permit Puerto Rico’s central government to file for bankruptcy — or risk chaos.

“There are way too many creditors and way too many kinds of debt,” Mr. Rhodes said in an interview. “They need Chapter 9 for the whole commonwealth.”

García Padilla said that his government could not continue to borrow money to address budget deficits while asking its residents, already struggling with high rates of poverty and crime, to shoulder most of the burden through tax increases and pension cuts. Where have we heard that before…

He said creditors must now “share the sacrifices” that he has imposed on the island’s residents.

“If they don’t come to the table, it will be bad for them,” said Mr. García Padilla, who plans to speak about the fiscal crisis in a televised address to Puerto Rico residents on Monday evening. “What will happen is that our economy will get into a worse situation and we’ll have less money to pay them. They will be shooting themselves in the foot.”

“My administration is doing everything not to default,” Mr. García Padilla said. “But we have to make the economy grow,” he added. “If not, we will be in a death spiral.”

And this one: any deal with hedge funds, who are desperate to inject more capital in PR so they can avoid writing down their bond exposure in case of a default, “would only postpone Puerto Rico’s inevitable reckoning. “It will kick the can,” Mr. García Padilla said. “I am not kicking the can.”

We wonder how long before Tsipras, who earlier was quoting FDR, steals this line too.

And speaking of Prexit, how long before Puerto Rico exits the Dollarzone… and will there be a Preferendum first or will the governor, in his can kick-less stampede, just make a unilateral decision to join Greece, Ukraine, Venezuela and countless other soon to be broke countries in the twilight zone of Keynesian sovereign failures?