– “This Is A Sad Decision”: Europe Responds To The Greek Referendum, Which Has One Massive Problem (ZeroHedge, June 27, 2015):

In the aftermath of yesterday’s “nuclear option” announcement by Greece, when in a dramatic after-midnight speech Greek PM Tsipras announced that Greece would hold a referendum next Sunday, the day after the US independence day, the same Greek government made it very clear how it wants the Greeks to vote.

First, it was the Greek Energy Minister Panagiotis Lafazanis, head of the Left Platform movement of Syriza, who said in comments broadcast on state-run ERT TV that a no vote by the Greek people in July 5 referendum “will open the road for a new future for the country” adding that “the dilemma facing Greeks is “whether to live better or not. Greek people are aware of difficulties of a new starting point, they’re ready to support new national effort.”

Then the alternate health and social security minister Dimitris Stratoulis doubled down telling ERT-TV that Greeks are being given the opportunity to decide the way forward and “I’m optimistic” that they will give a “resounding” no to the “provocative” demands of the country’s creditors. The only issue is the question being put to the people in the referendum.” It got better when he said that “Greeks are being asked to vote whether the country should be a colony, or not, of creditors.”

Well, if that’s how the referendum question is indeed phrased then yes, it is clear how the Greeks will vote.

As was to be expected, the Greek opposition parties, except for the Nazi-inspired Golden Dawn, expressed horror at the referendum. Conservative main opposition leader Antonis Samaras accused Tsipras’ radical left government of advocating an exit from the eurozone and the European Union. “Mr Tsipras has led the country to an absolute impasse,” he said. “Between an unacceptable agreement and leaving Europe.”

Why? Because they know that despite the referendum move, which is clearly just a last ditch attempt by Tsipras to save his political career by punting the decision straight to the people, if there is a “Yes” vote to the proposed bailout, then Syriza is out and new elections have to follow.

As for the reason why Tsipras had to punt, it is a simple one: at the core of the ongoing Greek negotiation debacle is the inability of the local people to decide what they want: according to various recent polls 80% of Greeks want to stay in the Eurozone and keep the Euro currency, the problem is that 80% also want an end to austerity. Two conditions which are mutually exclusive. It is no surprise then that Tsipras had no clue how to proceed based on his mandate.

So with all that in place, the question was how would Europe respond to this shocking after-midnight (both literally and metaphorically as July 5 comes after the June 30th deadline by which Greece needs to have a deal in place) announcement. Conveniently we had just the soundbite venue today when the European finance minister met once more in Brussels to finalize the Greek deal, which is now clearly moot, and instead were asked for their reactions to the referendum proposal.

Here are some of the key responses:

First, the take of Finnish finance minister Alexander Stubb who said “we’re basically closing the door for any further negotiations,” Stubb says to reporters in Brussels before a meeting of euro-area finance ministers adding that most of the Eurogroup opposes a program extension adding the ominous: “Plan B is fast unraveling and becoming plan A. We cannot extend the program as it stands. There is nothing else on the table. We will have to see what the next step entails for Greece.”

Then it was the turn of Varoufakis’ old nemesis, Dijsselbloem, who said that the Greeks “seem to have taken a negative stand on the last proposal by the three institutions, and basically reject those proposals.”

“That is a very sad decision, because the door in our mind was still open to finalize talks,” Dijsselbloem also said to reporters in Brussels before a meeting of euro-area finance ministers. “And now, given their decision, they are now proposing to hold a referendum, again with the negative advice to the Greek people, and that is a very sad situation.”

“We will hear from the Greek minister today whether all of this is correct, whether we understand that correct, and then we will talk about the consequences that will have.”

Of course, no response would be possible without the German finmin Schauble pouring the usual glass of cold water on the face of Greece and he did so promptly when he said that “we no longer have a basis for negotiation.”

“We actually came today to try to negotiate a unified position with Greece, but the Greek government, if I understand it correctly, has unilaterally ended the negotiations. We have to look at what the situation is. The program ends on June 30. We know the situation with the Greek banks. That’s an issue of talks between Greece and the ECB. But we’ll also discuss that. But right now we have to discuss everything, that’s why we’ve agreed to meet this afternoon.”

On the question of Plan B: “What does Plan B mean? The negotiations have been abandonded by Greece, the negotiating table. So we’re in a situation in which the program ends Tuesday, because there’s no other negotiations on anything else.”

There was a brief comic interlude when the Slovenian finmin Peter Kazimir responded to what he expects from Yanis Varoufakis saying “more lecturing” before making it also clear that if the Greek government rejects the proposal, which it effectively has done with the referendum, then the “programme is over.”

But the biggest problem for Greece was phrased as follows by an unnamed EU official cited by Bloomberg who said that Euro-area finance ministers are unlikely to extend Greece’s aid program while Prime Minister Alexis Tsipras considers a referendum adding that “some nations won’t accept such an extension.”

Belgian finmin Van Overtveldt confirmed as much saying that “we don’t have three weeks, but three days. So that is something that everybody and the Greek government should be aware of. They have wasted so much time in the last weeks and now we have come to the point that we have just three days left. We can no longer prolong whatever action we want to take, because June 30 is there, it is very much there. June 30 is the end of the program. We will have to decide on issues today.” Alas, that is now impossible as per the events Greece has set in motion.

When asked about a possible extension of the Greek program beyond June 30, Van Overtveldt says: “I don’t think so.”

And so we reach the massive problem facing the Greek people and the way the referendum is proposed: because it takes place 5 days after the June 30 expiration of the extended bailout program, there won’t be an actual program to “refer” on, especially once Europe makes it clear today that unless a deal is reached today, which now appears impossible, then there won’t even be the offer of a program on July 5.

As a reminder, this is what the Greeks would be voting for: according to the cabinet proposal, posted on the parliament’s website, voters will be asked to respond to the following question:

Greek people are hereby asked to decide whether they accept a draft agreement document submitted by the European Commission, the European Central Bank and the International Monetary Fund, at the Eurogroup meeting held on June 25 and which consists of two documents:

– Those citizens who reject the institutions’ proposal vote Not Approved / NO

– Those citizens who accept the institutions’ proposal vote Approved / YES. 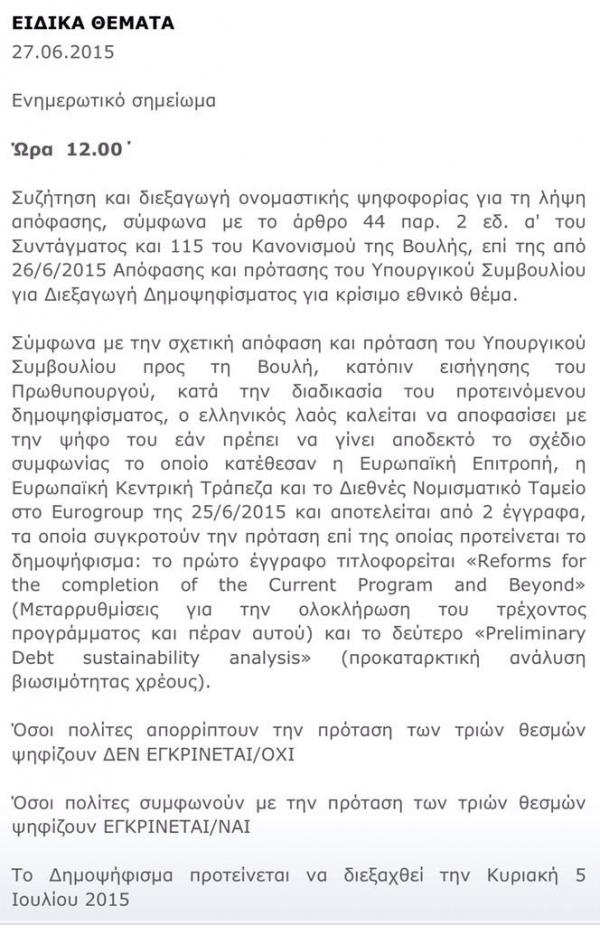 Sure enough moments ago Varoufakis was quoted as saying he would ask the Eurogroup for a bailout extension of a few weeks to accommodate the referendum.

And the punchline: if the Eurogroup says “Oxi”, then the entire Greek gambit, which has been a bet that to Europe the opportunity cost of a Grexit is higher than folding to Greek demands, collapses.

If the Eurogroup declines Varoufakis’ request, there simply can not be a referendum, as the “institutions proposal” will no longer be on the table. As such, the only question is whether the ECB will also end the ELA at midnight on June 30, adding insult to injury, and causing the collapse of the Greek banking system days ahead of a referendum whose purpose would now be moot.

But that would be suicide to the European project, as it sets the Grexit in play and with that the “European Union” becomes nothing more than Disunion and moving the crisis away from Greece to Italy, Spain and Portugal, the Greek game theorists would say, claiming that to the ECB this is the worst possible outcome?

After all even the former Greek prime minister, George Papandreou, who lost his job threatening to do just the referendum which Tsipras announced yesterday, came to twitter to blast the decision and saying it is irreversible.

Recall what we said last week in “Goldman’s “Conspiracy Theory” Stunner: A Greek Default Is Precisely What The ECB Wants” which we urge everyone to reread, especially those who think that the ECB and thus Troika, will cave to any last minute Greek demands. Because a Grexit, at least according to Goldman, may be just what Mario Draghi wanted all along, and the only question is who ends up getting the blame for Grexident. Conveniently, with the referendum announcement, Greece blinked in the game of blame, and now Europe can legitimately say it was the Greek’s fault and they kicked themselves out of the Eurozone, which will then be a green light for the ECB to expand its QE, crush the Euro, and – supposedly – lead to even more growth for Europe as Greece is left to fend for itself outside of the monetary union.

All this, of course, assuming the Greeks do vote No on the referendum. And even if they vote Yes, which is a distinct possibility based on recent polls, it may already be too late, as it will unleash a political crisis even more delays and gridlock, new elections, and even more misery from inside the Eurozone. Assuming, of course, that the Troika will agree to have Greece back, without Syriza in power of course.

In any event, going forward the Greeks will only have themselves to blame for whatever the final outcome is. That, and the Greek tragicomedy which has now lasted for over 5 years, may finally be over.

1 thought on ““This Is A Sad Decision”: Europe Responds To The Greek Referendum, Which Has One Massive Problem”