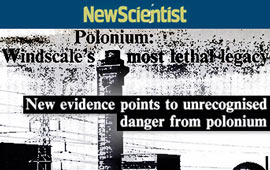 New Scientist, Mar 1983: 25 years since the nuclear accident at Windscale… Attention has centred [on] radioactive iodine… the National Radiological Protection Board (NRPB) said the iodine-131 may have killed 13… However, the damage to health may have been much more severe… Indeed, it could represent the worst environmental disaster that Western Europe has known this century… re-examination of the data… reveals that one crucial isotope released in the fire has been ignored… there was one isotope released in the accident that is highly mobile [with] a high take-up by the human body… this was only revealed this week by the NRPB after New Scientist’s inquiries… It is polonium… polonium could give… a total dose to the UK of 5 million man-rems… the death figures may have to be revised significantly upwards… The figures suggest that some 1200 excess cases of leukaemia may have been  caused in Britain by the Windscale accident. Since leukaemia deaths account for some 15 per cent of cancers attributable to nuclear accidents, the total toll of cancer deaths suggested is 8000… Clearly further investigations into the whole of the Windscale accident must be urgently pursued. The British are in effect now the nuclear laboratory of the world.

Woods Hole’s Ken Buesseler and others have cited polonium-210 levels in seafood tested for Fukushima radionuclides, for example: “Doses from eating fish are very low off US, and in fact 500 times greater from a natural radionucli