“… suddenly the reality of a Greek bail-in which could amount to up to 100% of total Greek deposits, becomes all too real. “ 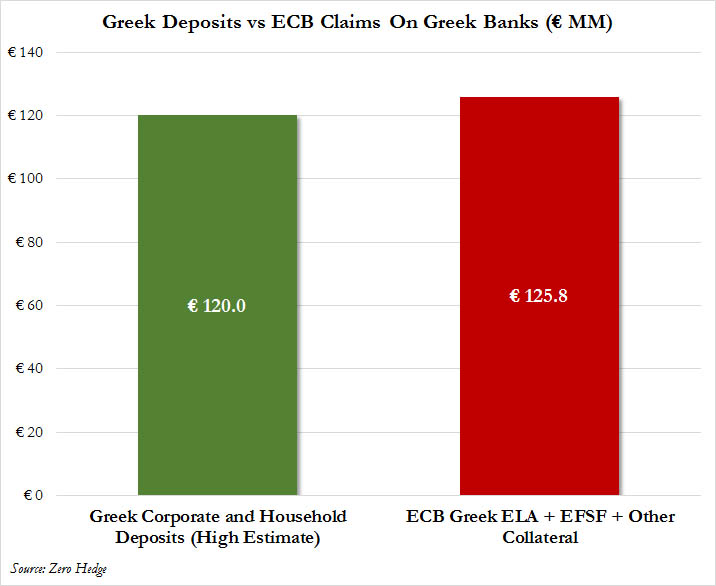 If it seems like it was only yesterday (in trading days) when the ECB boosted its latest Greek ELA by €1.8 billion to a record high €85.9 billion, it’s because it was.

Fast forward to Monday morning, when following a Friday bank run which sucked out another €1.6 billion coupled with another €1.6 billion withdrawn over the weekend and today, and perhaps the only question is why did the ECB not hike its latest “emergency” ELA disbursement more than just another €1.9 billion to a new record high of €87.8 billion: after all it will have no choice but to increase its emergency liquidity for Greece’s increasingly more insolvent banks (because the collateral against which the ECB is lending after a modest haircut would be worth precisely zero if the ECB were to pull its backstop to the Greek banking system) tomorrow, or else engage Goldman’s plan B in which a Greek terminal bank run ends up in a default and as a result the ECB proceeds to boost its QE to “regain credibility”, send the EUR plunging (to assist the internal revaluation), and assure another year of record bonuses for Goldman.

This is how the now daily ELA increases have looked like for Greece since the arrival of the Syriza government: 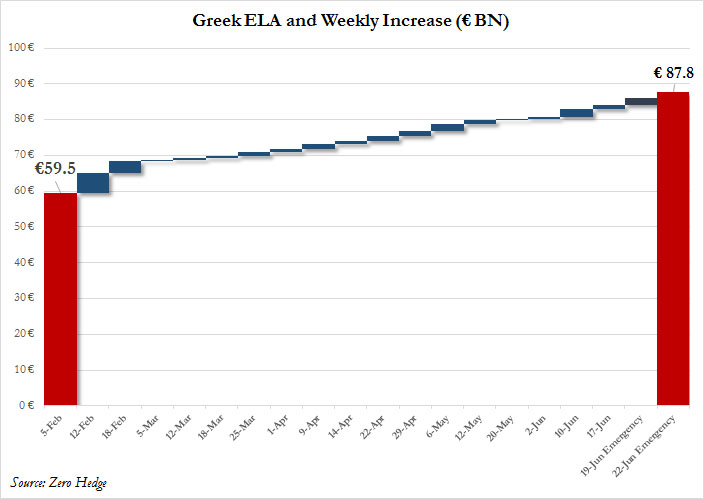 But perhaps what is even more important is that net of the latest ELA increase, when adding some €38 billion in collateralized EFSF bonds and other collateral usage, we find that we have not only reached parity but crossed it: as of this moment Greek deposits, which are generously estimated at €120 billion but in reality are lower, are less than the total ECB claims on Greek banks and the Bank of Greece, amounting to €126 billion.

Why is this important? Because if overnight the ECB says “no more”, and pulls a Cyprus, forcing Greek banks to procure liquidity in other ways, those Greek “assets” which have collateral value only because the ECB is backstopping them (and which would fetch at most pennies on the dollar once all Greeks stop paying their interest expense on outstanding debt in a default situation), then suddenly the reality of a Greek bail-in which could amount to up to 100% of total Greek deposits, becomes all too real.

Will the ECB use such a scorched earth approach, one which could potentially wipe out virtually all Greek deposits in the biggest “bail in” in history? For the sake of the Greek people, we certainly hope not but then again there are those record Goldman bonuses to think of, and remember: the ECB does not a catalyst to boost QE even more…