Tsipras had effectively resubmitted Greece’s previous proposal (i.e. a proposal that did not include concessions on a VAT hike or pension cuts) only this time, he included a second document that outlined how Athens hoped to tap leftover bank recap funds from the EFSF and bailout money from the ESM. Greece took that same proposal to Brussels over the weekend and it didn’t fly there either, leaving Europe to wonder just how far Tsipras was willing to go with the brinksmanship.

The problem is simple and it’s been outlined in these pages extensively. The game of chicken can theoretically go on at the political level for some time. That’s because the bundled IMF payment isn’t due for another two weeks and even if it were missed, Christine Lagarde has quite a bit of discretion as it relates to sending an official failure to pay notice to the IMF board and triggering cross acceleration rights for Greece’s other creditors. In other words, a formal default is a matter of politics and it can be put off for at least 30 days past the end of this month.

What cannot be controlled at the political level is what happens on the ground in Greece. That is, the economy is bleeding jobs and businesses and the banking sector is hemorrhaging hundreds of millions of euros every day. If suppliers cut off credit to the Greek economy and deposit flight turns into a panicked bank run, the glacial pace of political logrolling will prove hopelessly inadequate to contain the situation, meaning the country could descend into chaos while both sides watch in horror from the negotiating table in Brussels. Yesterday, Germany’s EU Commissioner Guenther Oettinger warned of exactly this and suggested that Europe plan for a “state of emergency” in Greece.

And plan they did. Midway through US trading on Monday the German press reported that Europe was prepared to implement capital controls over the weekend should Greece fail to table a workable proposal at a meeting of EU finance ministers in Luxembourg on Thursday. We’ve outlined what capital controls could look like in Greece on a number of occasions (most notably here and here), but for those needing a quick reference, consider the following flowchart: 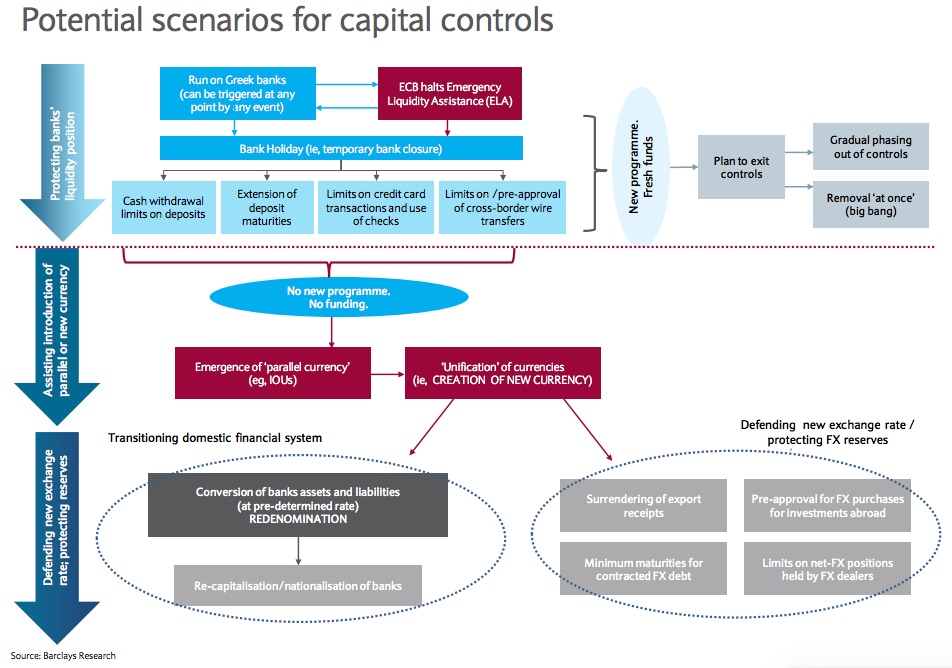 German daily Süddeutsche Zeitung reports that Eurozone countries have agreed on a contingency plan if no deal between Greece and its lenders is struck by this weekend. According to the paper, if this week’s Eurogroup meeting failed to yield an agreement, Eurozone leaders would hold an emergency summit – potentially as early as Friday evening. The contingency plan would involve imposing capital controls on Greek banks over the weekend.

As for the Eurogroup meeting and the rumored emergency summit, Greece contends it will not be submitting a new proposal and some EU officials are skeptical about the utility of holding a summit if no progress is made in Luxembourg. FT has more:

Eurozone officials are discussing holding an emergency summit on Sunday for leaders to tackle the crisis in Greece amid mounting fears a deal to break an ongoing impasse between Athens and its bailout creditors will not be reached at a high-stakes finance ministers meeting on Thursday.

According to two senior officials, the idea of holding a summit of eurozone heads of government was mooted in meetings among representatives of Greece’s creditors on Monday, a day after last-ditch negotiations to reach a deal to release €7.2bn in much-needed bailout aid collapsed.

They said that although the idea was discussed, there is considerable resistance to convening the summit among several creditors since technocratic issues like Greek pension reforms and tax rates are not normally the province of EU presidents and prime ministers.

He told Germany’s Bild newspaper: “The eurogroup is not the forum for presenting positions and plans which have not previously been discussed and negotiated at a lower negotiating level.”

“The next and hopefully decisive step is the eurogroup [on] Thursday,” said the spokesman, Preben Aamann. “Any further steps will be decided in light of the eurogroup outcome. There should be no illusions that an agreement becomes easier or more advantageous over time.”

Alexis Tsipras, the Greek prime minister, has publicly insisted that he will not be presenting any new compromise proposals at the Thursday meeting, and officials said the discussion at the eurogroup of finance ministers on Greece could end up being perfunctory as a result.

In addition, some officials believe Athens’ decision to send Mr Varoufakis, the combative finance minister, to the eurogroup session could preclude a deal being worked on Thursday

Recall that the last time Varoufakis attended a meeting of EU finance ministers, he ended up eating dinner alone in Riga and tweeting out FDR quotes after his antics at the negotiating table prompted EU officials to phone Tsipras and plead with the PM to sideline his FinMin or risk throwing the entire process into disarray. Varoufakis was soon demoted on the negotiating team.

All signs thus point to the imposition of capital controls, setting up a potential “Lehman Weekend 2.0” unless all sides suddenly realize what they’ve wrought, convene an emergency meeting among heads of state, and strike some manner of hastily construed stopgap agreement. Whether or not that’s feasible remains to be seen and it appears as though Sunday may be the day of reckoning.

For now, the official line is that Europe will only restart talks if Greece “submits something new”, and if the last several weeks are any indication, “something new” is not forthcoming.

Finally, Bild is reporting that Greece will seek to delay its June 30 IMF payment by six months.

The Greek government is seeking to delay a 1.55b euro payment to the IMF by six months.

Greece has found technical option to delay IMF payment due at the end of June.

And because this is Europe, the Greek government has promptly denied the above: