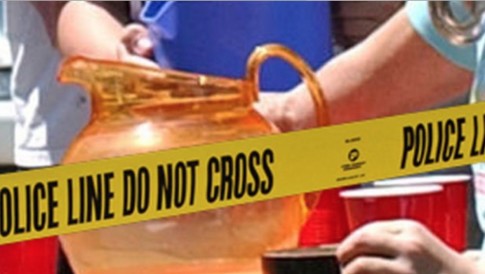 Don’t mess with Texas. Particularly if you happen to be a person who enjoys the freedom to purchase lemonade from two adorable little girls trying to raise money to buy their dad a Father’s Day gift. In that case, you better watch out. The cops are on the case, ever vigilant to protect the unsuspecting citizen from the perils of contraband juice.

There is a war on normal human behavior happening all across America. It was only yesterday that I highlighted the inhumane case of a Florida couple which had its children snatched away from them by Child Protective Services (CPS), because the kids were playing alone in their own backyard for 90 minutes. Here are a few excerpts from the piece titled, 11-Year-Old Boy Taken Away by CPS for Being Left in Backyard Alone for 90 Minutes; Parents Charged with Neglect:

One afternoon this past April, a Florida mom and dad I’ll call Cindy and Fred could not get home in time to let their 11-year-old son into the house. The boy didn’t have a key, so he played basketball in the yard. He was alone for 90 minutes. A neighbor called the cops, and when the parents arrived—having been delayed by traffic and rain—they were arrested for negligence.

They were put in handcuffs, strip searched, fingerprinted, and held overnight in jail.

It would be a month before their sons—the 11-year-old and his 4-year-old brother—were allowed home again. Only after the eldest spoke up and begged a judge to give him back to his parents did the situation improve.

Not to be outdone, Texas is using taxpayer resources to crackdown on little girls selling lemonade. From the Free Thought Project:

Tyler, TX — Last week, police in Texas heroically saved the town from likes of two young girls who attempted to open a black market lemonade stand. The girls, one 7-year-old and one 8-year-old, dared to try to raise money to buy a Father’s day present for their dad by setting up a lemonade stand in their neighborhood.

Andria and Zoey Green told ABC affiliate KLTV they were trying to raise about $100 for a Father’s Day present. They wanted to take him to Splash Kingdom.

Over the weekend, the two young entrepreneurs took to the streets with their delicious batch of homemade lemonade and began to provide willing customers with their product. Only one hour into their business endeavor, these girls had raised 25% of their goal.

However, their cash cow would be shut down not long after it started. Overton police chief Clyde Carter showed up along with the city code enforcer and shutdown their criminal operation.

The girls had violated Texas House Bill 970, or the Texas Baker’s Bill, which does not allow the sale of food that needs time or temperature control to prevent it from spoiling. Since the lemonade would eventually grow mold after being left out for days, police said they needed an inspection from the health department and a permit to sell it and deemed their operation “illegal.”

Police officers can certainly use discretion and choose not to “enforce” this law for use in such an asinine application. The fact that these girls had their good intentions ruined by those who claim to protect them speaks to the level of discontent with law enforcement in America today.

The heartening side to this story is that these young girls are now learning to bypass this tyrannical system of bureaucratic nonsense. The girls said they will be setting up their lemonade stand again this weekend. Instead of selling it though, they will be giving it away, but they will gladly be accepting donations.

I’m still waiting for a bank executive to be sentenced.

In case you still don’t understand how the “rule of law” is applied in America, see:

11-Year-Old Boy Taken Away by CPS for Being Left in Backyard Alone for 90 Minutes; Parents Charged with Neglect