Just days after David Cameron’s “I promise a referendum” victory in the British elections, which JPMorgan warns now looks likely to happen as early as 2016, France’s far-right National Front party has called for an in/out referendum on the EU at the same time as the UK holds its vote. As EUObserver reports, Florian Philippot, an MEP and the party’s deputy head wrote to French President Francois Hollande this week, “the time has come to ask everybody in Europe Yes or No – if they want sovereignty to decide on their own future.”

With French daily Le Figaro, in an Ifop poll published on Friday, finding 62% of French people would vote No to the EU constitution again if they were asked the same question as 10 years ago, the question of a French referendum is serious for the future of the EU.  As EUObserver reports,

Florian Philippot, an MEP and the party’s deputy head, wrote on Thursday (28 May) that president Francois Hollande should “follow the British example” and “follow the calendar outlined by our neighbours across The Channel”.

“The time has come to ask everybody in Europe Yes or No – if they want sovereignty to decide on their own future”.

He added that British PM David Cameron, who is currently on a tour of European capitals to sound out feeling on a renegotiation of EU powers, “with this referendum … has put himself in a powerful position to demand real reforms”.

He also said that if Hollande declines to do it, the National Front will put an in/out EU vote “at the heart” of its 2017 presidential election campaign.

Speaking on BFM-TV earlier in the week, Philippot noted that his party wants a “referendum republic”, in which average people can trigger a popular vote on any subject if they file more than 500,000 signatures.

He cited Switzerland as a model and listed French membership in Nato, in the Schengen passport-free area, and the EU-US free trade treaty as other potential votes.

The eurosceptic and anti-immigrant National Front came first in France’s EU elections last year, with 25 percent of the vote, and again in local elections earlier this year. 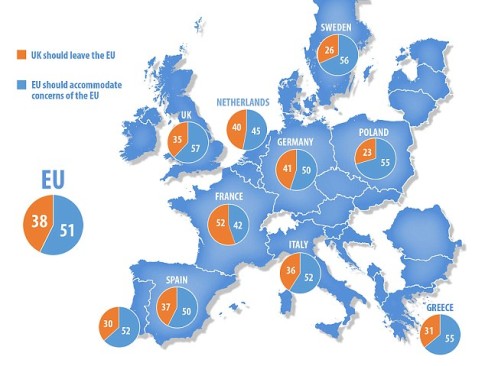 Which means 2 major European economies will likely face referenda withn 12-18 months, as JPMorgan recently noted, U.K. won’t delay the promised in out referendum on EU membership until 2017 but will put the issue to vote in late 2016 instead. Given the ruling Conservatives have only a small majority, any legislation could fail if euro skeptics within the party vote against it, suggesting the party leadership will want to get the issue resolved sooner rather than later.

Since it seems unlikely Treaty revisions will take place within that timeframe and there’s limited room for the U.K. to secure any deep change, there may be strategic reasons to hold the referendum in late 2016, JPMorgan says.

Whether through mainstream political parties being forced into populist referenda to hold power or by separatist threats, Europe’s union appears to be creaking… 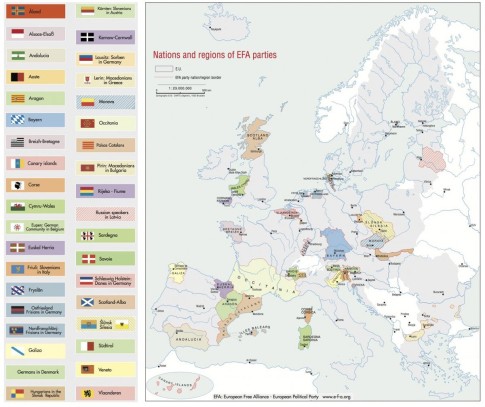