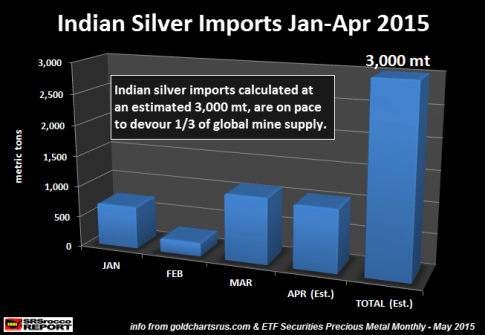 The first four months of 2015 saw India import possibly as much as 3,000 tonnes of silver bullion. If the momentum is maintained India is on track to import a staggering 9,000 tonnes over the course of 2015.

This would represent almost one third of total annual mine supply globally. Worldwide mine supply was 877 million troy ounces (27,277 metric tonnes).

It would represent a 27% increase in India’s 2014 silver imports of 7063 tonnes which itself was a 13%  increase on the 2013 figure showing a steadily growing demand for physical silver in India with each passing year.

According to srsroccoreport.com, who compiled the data, it is Indian citizens who are the driving force behind the record demand for silver in India. We would speculate that India’s commitment to solar power may also be a factor.

Back in 2009, the Indian government set a target of 20GW of solar power generation by 2020. However, in January of this year the government dramatically reaffirmed its commitment to solar power by setting a new target of generating 100GW by 2022.

Solar power is generated by photovoltaic cells which rely upon silver for their manufacture. While PV cells used in India are predominantly manufactured in China it may be that Indian investors may be accumulating silver in anticipation of growing demand for PV cells – China also has a highly ambitious solar power program – or it may be that the government itself is stockpiling supplies to protect against supply disruptions.

Srsroccoreport.com also point out that silver imports into the U.S. continue to be enormous. They speculate that this is due to a handful of institutions and high net worth individuals buying silver while sentiment among the wider public remains pessimistic – a good contrarian indicator.

Silver is a useful component in any portfolio. While like all markets today, it is quite volatile, an allocation to physical silver compliments gold as a diversification and is a leveraged form of gold due to its tendency to outperform gold and provide higher returns in bull markets.

Many investors store silver in secure safe haven storage vaults, many more store silver with the Perth Mint Certificate Program, which allows investors to store silver at low cost and in the comfort of a government guarantee. At GoldCore, we have long believed that silver is an integral part of a portfolio of precious metals. The percentage of silver, depending on your attitude to risk and advice from your financial planner, should not make up more than 25% of your precious metal allocation.

A Word of Caution When Buying Silver: As a long term investor it is critical that you do not buy from a closed market digital metal provider who may entice you with ultra cheap premiums. For starters you may be limited in how you can sell your silver, should the time come, as the only market available to you will be the one made by the provider and the fees they charge may be subject to change at a moments notice. Short term investors may well be safe in such programs but for those with longer time horizons – safety and flexibility should trump all other considerations.