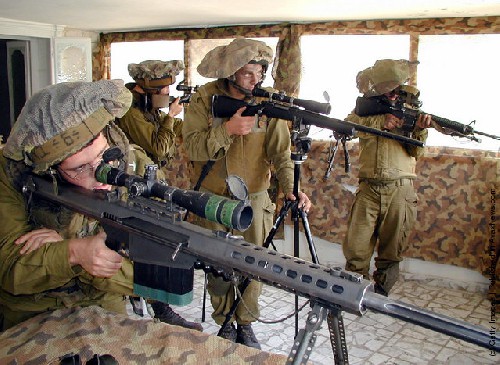 Back in 2006 a story made its rounds through the internet and the worlds media that Israel snipers were killing U.S. Troops in Iraq and pinning the blame on “insurgents” in order to enrage American troops so that the slaughter continued. After a thorough investigation into this older story there is more than enough evidence to point to the fact that Mossad (with the CIA) is operating inside Iraq and has been for years. I used the original material and new updated info that has come out that proves what it says is true. I rewrote the article and sourced it with links to click on see the original article that backs up each claim or a video showing evidence backing up each claim. My hope is that more people will see this larger, better sourced article and take this more serious than they did the original back in 2006. On October 18, 2006 Anderson Cooper of CNN showed a video of snipers killing U.S. troops in Iraq. CNN says it obtained the video from a “representative” of an unnamed “insurgent leader.” Bear in mind that Anderson Cooper used to work for the CIA. Interesting side note, If you go to Anderson Coopers “blog” and look at Anderson Cooper’s Archives you will see that there is a huge missing gap of video from December 2005 – January 2008. That is two years of missing video reports. Interesting that it happens to be the same time this report aired and the same time that the sectarian violence in Iraq was raging and attacks by “insurgents” on our troops increased in number and brutality.

And remember special forces have been caughtpretending to be Arab insurgents running around shooting people in Iraq.

Richard Wilson’s hypothesis: Israeli soldiers and/or Mossad/CIA agents are killing our soldiers in Iraq in order to enrage American troops so that the slaughter continues.

At the very beginning of the original (now missing) video clip, you see a rifle with a video camera attached to it. This weapon is made by the Rafael company, an Israeli arms manufacturer, that also makes IEDs. If you watch the video all the way through, it explains how this rifle works. CNN stated that the camera used to film these shootings was not a mounted rifle camera. But as you watch the video, you see that with each shot fired, the camera recoils. That would only happen if it were mounted on the rifle. Why is this significant? Because this kind of rifle-camera is extremely sophisticated and not available to your average Iraqi insurgent. Something this sophisticated points to CIA/Mossad.

The CIA/Mossad are masters at false flag operations, e.g., The Oklahoma City bombing, the attack on the USS Cole in Yemen, the bombing of the Israeli Embassy in Buenos Aires, the July 7, the 9/11 attacks in New York & Washington D.C., the assassination of the Prime Minister in Beirut, the bombing of the Hassan al-Askari Mosque in Samarra, Iraq, etc.

Mossad & CIA Agents freely move among US and UK troops in Iraq, and have access to top-level US intelligence. Until July 2003, the head of all US forces in Iraq and Afghanistan was General Tommy Franks, a Zionist NWO lapdog. He was on the board of directors for Bank of America, a position he held until resigning on June 11, 2009 for unspecified reasons but as part of an “exodus” of ten directors from April to August, 2009. On November 7, 2006 another NWO stooge with Zionist beliefs became a principle liaison between Mossad and US forces in Iraq: Major General Richard F. Natonski of the Marine Corps. His title was Deputy Commandant for Plans, Policies and Operations.

Because of this access, the “insurgents” (i.e., CIA/Mossad agents) know exactly where US vehicles will be and who will be inside them. This allows them to target for maximum false flag effect.

For example, on July 23, 2005, a detachment of 19 female US Marines was sent to Fallujah to check Iraqi women for bombs. An IED blew up their truck. Two of the young American women were killed, five were critically wounded, and four were captured. The bodies of the four captured women turned up later in a garbage dump with their throats cut. Americans were outraged. Islamic clerics insisted that only Israelis could be so cold-blooded. And who was in charge of US forces in Fallujah at the time? None other than Major General Natonski, the Mossad liaison.

Americans are supposed to believe that rag-tag “insurgents” use IEDs powerful enough to kill three US troops per day, on average and flip over up-armored vehicles. An American soldier even set up a blog on how “Intel” is betraying and targeting US troops. The blog has long since been taken down, one can only assume by the Pentagon.

According to Richard Wilson, Israeli sniping and IEDs are false flag operations. He says that on March 28, 2005, Americans arrested Mossad agents who fired twice on a US Marine checkpoint. And indeed In 2005 U.S. Marines arrested 16 members of the Zapata Engineering Security Convoy for firing on Marine guard towers. The Marines beat up the Mossad agents and tore off their Star-of-David necklaces. (The US media incorrectly said the agents were Americans.) The Mossad agents said they were employees of Zapata Engineering, which is a CIA/Mossad front company that conducts interrogations, and also manages US ammo dumps and US motor pools in Iraq.

IEDs in Iraq are powerful enough to flip over a 70-ton tank. Some of the models shoot depleted-uranium projectiles, and are triggered by electronic devices surreptitiously planted on US armored vehicles. Zapata Engineering (which employs CIA & Mossad agents) makes this exact kind of trigger, and oversees some of the US motor pools.

Rumsfeld said the IEDs come from Iran, but Richard said they come from The CIA/Mossad, and are not “improvised” at all. The Israeli company, Rafael, makes IEDS, which are buried in the middle of a road. On the side of the road is a device which emits a laser or radio signal. This device is manufactured by firms like Zapata Engineering, which is controlled by Zionists/Neo-cons. The IED mine, manufactured by Israel, is inert until a US vehicle (secretly planted with a triggering device) rolls over it.

Whenever The CIA/Mossad carry out these false-flag operations they produce a videotape or a recording from an “unnamed source” that is “close to al-Qaeda.” Sometimes they say “the claim was posted on an Internet website, but its authenticity could not be verified.” These videos have been widely proven to be false and the CIA has even admitted that they faked Bin-Laden and Saddam Hussein videos.

We know the CIA is evil but Israel is our ally and would never kill any of our soldiers, sailors, or marines in cold blood, would they? After all, the USS Liberty massacre was “an accident!”

As for the CIA the list is larger than the national debt. One must understand that the CIA & Mossad are controlled at the very top by the same people. The citizens of Israel are being used by their government, and their government is controlled by the Rothschild family. The very same people who control our government. For more information on the U.S.S. Liberty watch the two films below.