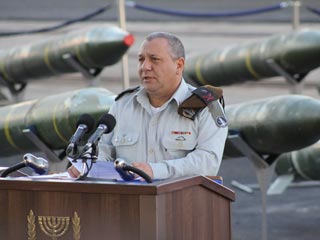 IDF chief Gadi Eizenkot with some of munitions he intends to hurl against 1.5-million Lebanese civilians

Israel’s chief of staff, Gadi Eizenkot told Israeli media that his forces were preparing for the next war with Hezbollah.  He promised that when (not if) it happens, Israel will force 1.5-million Lebanese to flee for their lives while it invades the country and destroys it in worse fashion than it did in 2006 (the last time Israel came knocking).  Israeli media only identified the source of this threat of war crimes as a “very senior IDF source.”  But an informed Israeli source confirms that it was none other than Eizenkot himself.

A bit of background is in order. Eizenkot is one of the three military geniuses who devised the Dahiya Doctrine, (I like to call it the Israeli version of Dresden), which calls for the army to use maximum lethality to devastate entire civilian neighborhoods in which Hezbollah operates.  Under this tactic Israel dropped a huge penetrating weapon in Dahiya and proceeded to celebrate the murder of Hassan Nasrallah. A bit prematurely as it turns out, as he survived, only to turn the tables and announce to the world that he’d defied the best that Israel had to offer against him.

Given this, it appears the IDF chief has hit today’s war crimes Daily Double.  Decimating entire civilian residential zones and deliberately expelling 1.5-million civilians from their homes on the pretext that it is your personal war playground are without doubt war crimes.

Here is the full Hebrew report:

In a separate Israeli media report in which he was also not identified, the Israeli general said the “entire population of southern Lebanon” would be expelled from their homes to allow Israel to operate in the “most efficient manner possible.”  He claimed Israel had “10,000 urban targets” of Hezbollah in its sites.  Which is interesting, since there are no “urban” areas at all in southern Lebanon.

The army chief’s reasoning for turning the south into a ghost town follows closely that of war minister Bogie Yaalon, who told a conference of the lawfare NGO, Shurat HaDin that Hezbollah “forced” Israel to kill Lebanese civilians because it put its rocket launchers in Lebanese living rooms.  He also warned that if Israel found it difficult to achieve its strategic objectives regarding Iran’s nuclear program with conventional means it might use nuclear weapons: but “not yet.”  Thank God for that caveat.  We can all breathe safely.

Eizenkot said expelling civilians would be necessary because Hezbollah “concentrates its forces in civilian areas…”  Take a look at the Kirya, the IDF Tel Aviv headquarters.  Smack dab in the heart of one of Israel’s biggest cities.

In a recently concluded major military exercise in northern Israel the IDF prepared for an incursion “thousands of meters into Lebanon.”  Further proof that Israel is a rogue state which threatens to invade its neighbors and bullies them with promises of war crimes-to-come.

You’ll be relieved to know that the general appears to know better than Hezbollah itself the latter’s condition of military preparedness, and it’s B-A-D.  The Lebanese military group lost 700 fighters in fighting in Syria. Eizenkot appears to be making the case that Hezbollah is the Great Satan of the Middle East.  It’s not only fighting with Iranian forces in Syria, it’s sent forces to Iraq (if Eizenkot is to be believed–and why not–don’t we always believe what Israeli generals tell us?).  The Lebanese Shia are also advising Yemen’s Houthi rebels.

He further claims that Iran has abandoned the notion that it can return Syria to the status quo that prevailed before the start of the civil war.  But it’s main goal now is to preserve a balance of forces that protects the Alawite enclaves (which are loyal to Pres. Assad).

If you look at all of this in logical terms, none of it makes sense.  Hezbollah is completely absorbed in the Syrian campaign.  Iran is about to sign a major nuclear deal with the P5+1 powers.  Neither one has any interest in entering into a military adventure against Israel.

The only explanation I have is that Israel is setting down markers regarding what it expects in Syria.  It is telling Hezbollah to back off its destabilizing activities in the Golan and allow Israel to establish a protective zone as it maintained in southern Lebanon for decades.  The saber-rattling may also be meant as background music for the Iran nuclear talks.  Warnings from Israel about wars against Hezbollah (and by implication its sponsor, Iran) will put the negotiators on notice that Israel still has the power to upset this apple-cart–or at least to send it hurtling toward disaster if it chooses.

NOTE: I’ve published three important stories in various media publications in the past week.  A week ago, I published a criticism of Seattle Mayor Ed Murray’s pinkwashing trip to Israel in Middle East Eye.  This week, I broke a major story published by Mint Press News (my first piece there) naming Avera Mengistu, the Israeli-Ethiopian who traveled to Gaza and has been imprisoned there since last October.  He’s been abandoned by the Israeli government which refuses to acknowledge him or his capture.  I salute the Israeli blog, HaKol Shekarim (“All Lies”) for having the courage to report that an “imaginary Israeli” named Mengistu is being held captive in Gaza.  Israeli security law turns all such brave publications into old-fashioned Soviet-era samizdat.  It is the first Israeli publication to break the gag order against publishing this story (in Hebrew).  If only the gag order was imaginary too!

Finally, I responded to a New Israel Fund whitewash of Mayor Murray’s Israel trip which was published in the Seattle Times.  My Times op-ed was published a few hours ago.

Please circulate these pieces as widely as you can to friends and on social media.  Don’t forget too that the research and reporting takes hard work that deserves your financial support.  Tip the jar via a tax-deductible donation or via Paypal in the sidebar.

2 thoughts on “IDF Chief of Staff Promises 1.5-Million Lebanese Refugees in Next War”