Asked whether he would repeat an assurance he gave in late 2012 that Greece wouldn’t default, Wolfgang Schäuble told The Wall Street Journal and French daily Les Echos that “I would have to think very hard before repeating this in the current situation.” To which Moody’s had just one thing to add: “there is a high likelihood of an imposition of capital controls and a deposit freeze.” 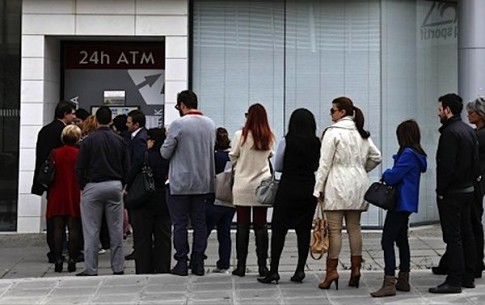 Ever since Syriza took over the Greek government and has refused, at least until now, to concede to every Troika demand of perpetuating a status quo which it was elected with a mandate to overturn, Europe has done everything in its power to make not only Syriza’s life increasingly difficult and hostile, but has taken every opportunity to turn the Greek population against its rulers, in hopes that a more “moderate”, technocrat government would replace the “radical leftists.” So far it has failed, despite the best attempts by the ECB and the European Commission to sput a terminal bank run.

The problem for Greece is that the government has run out of cash. Long ago in fact, and as reported earlier, the country has just two weeks of cash left and the next IMF payment will certainly not be made unless the IMF first finds a way to inject some more money into Greece (so the IMF can essentially repay the IMF), which however won’t happen without a deal first being implemented.

The other problem is that Greece has run out of time to get a deal in order, especially since with every incremental negotiation, the Syriza government repeats it has substantial “red lines” it won’t cross, something the Troika takes as a direct ultimatum. And the ECB, the IMF and the European Commission are not good at handling ultimatums.

Which is perhaps why the push to force a terminal bank run in Greece took on an added urgency today when first Moody’s and then Schauble, did everything in their power to strongarm Tsipras into agreeing with Troika demands, or else suffer the consequences of a Grexit: one which will have dire consequences for all of Europe, but which Europe is naively ignoring just because the recent launch of the ECB’s QE is making the underlying tension in the economy and financial markets (which no longer exist courtesy of precisely this QE).

The gloves officially came off just before the market open today when Moody’s released a report titled “Outlook for Greece’s banking system is negative” in which it did the unthinkable: it explicitly said that the worst case for Greece is now an all but certain outcome if the government doesn’t concede to the Troika, or Institutions, or whatever they are called today.

The outlook for the Greek banking system is negative, primarily reflecting the acute deterioration in Greek banks’ funding and liquidity, says Moody’s Investors Service in a new report published recently. These pressures are unlikely to ease over the next 12-18 months and there is a high likelihood of an imposition of capital controls and a deposit freeze.

Ordinarily, a statement like that by Moody’s would be unthinkable, and would lead to an immedate, business-ending lawsuit by any other country, except for Greece which right now can’t even afford the legal fees. And remember: the catalyst for everything getting better and Greece getting new cash is i) either a new government, ii) the current government conceding to Troika demands or iii) Grexit, and in neither case will Greece retaliate.

In other words, Moody’s is great when it comes to picking on defenseless “credits.” It would never say the same thing about any other country of course.

And then, perhaps just the confirm that both gloves are off, moments ago the WSJ reported that German FinMin, Wolfgang Schauble, said he couldn’t rule out a Greek default, a stance that will add pressure on Athens as negotiations over much-needed financing enter their final stretch.

Asked whether he would repeat an assurance he gave in late 2012 that Greece wouldn’t default, Wolfgang Schäuble told The Wall Street Journal and French daily Les Echos that “I would have to think very hard before repeating this in the current situation.”

“The sovereign, democratic decision of the Greek people has left us in a very different situation,” he said, referring to the January election that delivered a radical-left government bent on reversing five years of creditor-mandated austerity and painful economic overhauls.

What does all of this mean? Two things:

First, the Greece drama is almost over – indeed, having emptied its last remaining piggybank in the form of its IMF reserve capital, Greece now has no more funds and it can no longer raid its municipals and pensioners as they too are out of money. So one way or another, the endless Greek headlines will cease at midnight on June 4, when Greece either has a deal in hand with Europe or its fails to pay the IMF, which will being a 30 day grace period countdown, after which Greece will be officially in default, leading to a prompt expulsion from the Eurozone once the ECB yanks its ELA funds which now account for nearly two-thirds of all Greek deposits.

Second, both outcomes are now equally likely, which means volatility – currently dormant – will pick up in the next 2 weeks. It is unclear if said vol will be realized, but the front VIX contract, current at an artificially depressed level of just under 15, will likely be a good hedge if anyone is still long Greek bonds.

There is one outstanding question: perhaps after all this, the Greeks should just ask themselves if this is the kind of “European” partner they want to bind their fate to: a partner that will do everything in its power to subvert a democratically elected government, even if, or rather especially if, it means a wholesale “bail-in” for Greek depositors, who may lose as much as 70 cents on ever Euro: an outcome we predicted over two years ago when the Cyprus blueprint showed just how effectively it could be done.

And after Greece is done soul searching, the people of Spain, Italy, Portugal and Ireland should ask the same question, because if we have a Grexit in two weeks, then these PIIS countries are next.

3 thoughts on “The Gloves Come Off: Moody’s Warns Of Greek “Deposit Freeze” As Schauble “Won’t Rule Out Default””