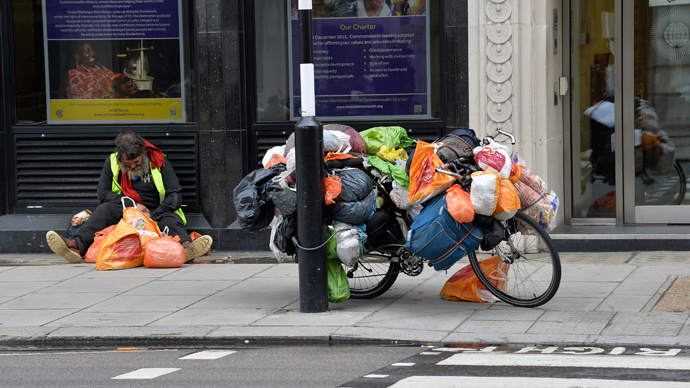 Britain has been labeled the “European capital of inequality” after a report found it is the most unequal country in the EU.

As part of a progressive study, the European Foundation for the Improvement of Living and Working Conditions (Eurofound) analyzed wages across the EU.

The report, titled Recent Developments in the Distribution of Wages in Europe, scrutinized data from 2004 to 2011 – the period before and after the onset of the Great Recession.

It found that the UK has the highest Gini coefficient of any EU member state – higher than that of the US. The coefficient is a widely used measure of income distribution within a nation, and is often used to calculate inequality.

According to analysts at Eurofound, Britain has a Gini coefficient of 0.404, while the US’ is 0.4.

The report, which was published last week, says: “The evolution of inequality in the EU as a whole seems to have been significantly affected by the economic crisis of 2008 [onward].”

Speaking to RT on Tuesday, Burke said: “The Tory government is fond of making spurious claims about Britain being the strongest economy in Europe. But the reality is that Britain under the Tories is the European capital of inequality.”

“All of the deterioration in the Gini coefficient in the EU is caused by the worsening of inequality,” he added.

“The jobs machine that David Cameron [is referring to] is in reality low-paid jobs, many of them providing unproductive services to the ultra-rich.”

In its conclusion, the report found inequality to be increasing across the EU.

Globally, the authors said that inequality has been growing within developed nations since the late 1970s.

Beginning with Anglo-Saxon countries, the growth of inequality eventually reached “traditionally low inequality countries” such as the Nordic countries during the 2000s.

Following the financial crisis of 2007-08 the UK became an outlier in the EU, as income equality began growing “very rapidly.”

The overall increase in EU inequality since 2008 was “to a large extent driven by developments in the UK,” the report said. “Without which the overall EU within-country component of inequality remained more or less stable as a result of rather diverse developments at the country level.”

A YouGov survey conducted this month and published Monday found that most UK voters believe the government should prioritize reducing the gap between rich and poor over faster economic growth.

Conservative supporters had the least concern about income inequality, while the majority of Labour, Liberal Democrat and Green voters said it should be prioritized by the government.

2 thoughts on “Inequality Street: UK most unequal country in EU, worse than US”