– Gold Withdrawals From NY Fed Vault Refuse To Stop: 200 Tons Of Gold Repatriated In Past Year (ZeroHedge, May 5, 2015):

One month ago, when we commented on the latest monthly withdrawal from the gold vault lying on New York’s bedrock some 90 feet below the NY Fed building, which then saw another 10 tons quietly repatriated by unnamed foreign central bank(s) bringing the total held on behalf of foreign governments to below 6,000 tons for the first time in the 21st century, we made an observation:

… it means that all of the 207 tons in Dutch and German withdrawals are now accounted for with a matched and offsetting “departure” at the Fed. Which is why the next monthly update of the Fed’s earmarked gold will be especially interesting: if March data shows that the withdrawals continue, it will mean that either Germany, or some other sovereign, has continued to redeem their gold which for some reason they no longer trust is safe lying nearly 100 feet below street level on the Manhattan bedrock.

As a reminder, for years it was anathema to even hint at distrust among “developed” central banks and thus to ask for one’s gold, because the very currency of central banks in a fiat regime is faith: faith which has been evaporating in inverse proportion to the trillions (at last check some $22T) in asset purchases by central banks to pretend that all is well. As such, even one defector from this grand “game theoretical equilibrium” would be enough to raise a substantial question about the viability of the current economic system which rests on one fundamental premise: the full faith and credit of fiat currencies, and particularly the US dollar as the reserve.

In any event, we now have the March data, and we can officially confirm that the gold redemptions from the world’s (allegedly) largest gold vault have continued, and another 10 tons of gold was put on a ship (or plane) in March in an unknown direction.

As a result, total earmarked gold at the NY Fed is now down to 5,979.2 tons, a level not seen in the current century.

More worrying, since Germany and the Netherlands started repatriating a portion of their gold held in Manhattan, some 217 tons of gold has been redeemed starting in February 2014 and just under 200 tons in the past 12 months. Putting this in comparison, during the Great Financial Crisis a grand total of 230 tons of gold fled the US to fund sovereign nations close to default with sales of a “barbarous relic.” Of course, all gold redemptions were promptly halted in November 2008… only to return with a vengeance since 2014. 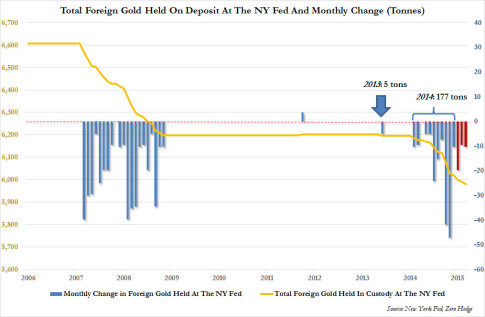 But what is most interesting is that as we noted last month, the total expected gold redemptions by Germany and the Netherlands amounted to 207 tons. Thus, the March redemption means that either Germany is continuing to pull its gold, some 10 tons at a time, or some other central bank has joined the parade of gold repatriators.

Finally, anyone who is unclear about the definition of “earmarked” gold is urged to read “Why Central Banks Hate Physical, Love “Earmarked” Gold, And What Is The Difference.”

4 thoughts on “Gold Withdrawals From NY Fed Vault Refuse To Stop: 200 Tons Of Gold Repatriated In Past Year”