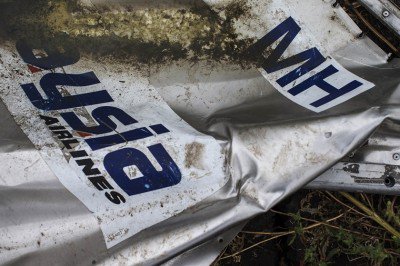 We’ve seen several photographs of the Malaysian Airlines MH17 cockpit remains on the ground in Eastern Ukraine. They show numerous 30mm entry & exit canon holes. These have been fobbed off by the propaganda media as ‘shrapnel’ damage from a BUK ground to air missile.

The consistent circularity and size corresponding to 30mm bullet holes, or the fact that they are concentrated on the cockpit doesn’t bother apologists who have an agenda to promote.

In a CNN report (see below) there is footage of Donbass militia looking at the newly fallen wreckage of MH17, some of it still on fire. The video was broadcast by CNN. As the images run past us a barely noticeable item is briefly in view of the camera:

A combatant spots something amongst the debris. He bends down to pick it up. What he has retrieved is a 30mm bullet that was in the fallen material.

The bullet is in view only for 3 seconds; from 1′ 36″ to 1′ 39″. And the way it was casually passed by the camera lens for so short a time indicates that the man who found it took it for granted that the plane was shot at by the trailing fighter jet(s). 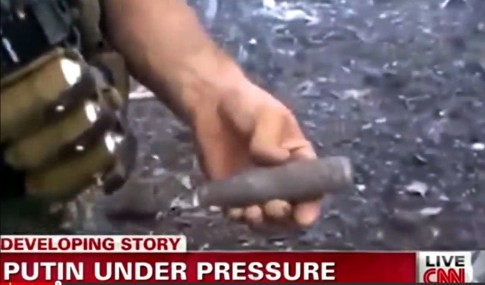 This was within minutes of the shooting down, and before the mass media propaganda machine started its deception a few hours later about a rebel or Russian launched BUK missile. So the Donetsk combatant would not have known the significance of the 30mm canon bullet he was holding.

Previously, Global Research has published articles showing the bullet holes and witness evidence about the downing of MH17 [1], but so far as I am aware no video clips have been noticed showing the damning evidence of this 30mm bullet.

A quick search of Global Research [1] and any web search engine [2] will give numerous links to evidence and photographs of the bullet holes, as well as witnesses who saw the fighter jet(s). This, together with the flight route diverted directly over the battle area indicates a premeditated plan to bring the plane down.

As to whether air to air missiles were fired from the fighter jet(s) or a bomb had been planted in the plane, those could well have been additional factors. But we now know for certain that the plane was machine gunned by fighter jets. The bullet holes in the cockpit, and now this 30mm bullet in plain view proves it.

One is left to wonder, what kind of irrational psychopaths would order such a murderous act, what brain-dead automatons would carry it out, and what supine and servile corporate mainstream media would try to deflect attention from the perpetrators and blame other parties.