So they ‘evacuated’ the drone then (in order to protect it from the Fukushima radiation in Tokyo)?

And remember, radiation is “good for you” (but only in Japan): 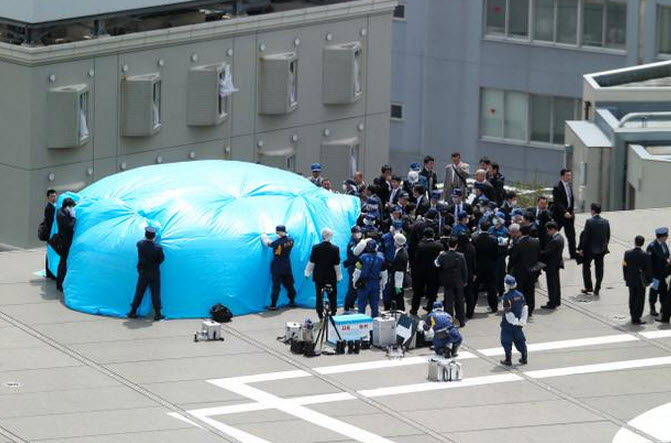 Japanese Prime Minister Shinzo Abe awoke on Wednesday to find a half-meter-wide drone, contaminated with trace levels of radioactive cesium, on the roof of his office in Tokyo. Of course this is nothing new for Washington where a drone crash-landed on The White House lawn in January and Chief Cabinet Secretary Yoshihide Suga said that Japan is looking to tighten laws governing drones (ahead of next year’s G7-summit and the 2020 Olympics). Of course, the police have explained cesium isn’t harmful to humans(though we suspect they aren’t stupid enough to drink it).

A drone was discovered on the roof of the Japanese prime minister’s office building Wednesday, and police said a tiny level of radiation was detected next to it.

A spokeswoman for the Metropolitan Police Department said an official from the prime minister’s office found the four-propeller drone, which was about half a meter wide and equipped with what appeared to be a small camera and a plastic container. She declined to comment on the container’s contents.

Later Wednesday, a police official said that trace levels of radioactive cesium were found near the device.

Prime Minister Shinzo Abe was in Jakarta attending an Africa-Asia summit when the drone was found, and no injuries or damage were reported.

“The police will conduct a thorough investigation, and we will take every possible risk-management measure,” Chief Cabinet Secretary Yoshihide Suga said during a regular news conference. The police official said a special unit has been set up to investigate the incident.

Mr. Suga said the government had begun looking into tightening laws governing drones earlier in the year, as Japan prepares to host next year’s Group of Seven summit and the 2020 Olympic Games.

According to Japan’s transport ministry, no permits or licenses are required to operate drones, which have the same status under aviation law as remote-controlled toy planes. Their operation is unrestricted below an altitude of 250 meters in general airspace and below 150 meters under flight paths.

As I’ve said many, many times before:

Everybody should have evacuated Tokyo a long time ago.

– Japanese doctors threatened for revealing data on how bad Fukushima-related illnesses have become — Gundersen: We had pregnant sisters in Tokyo deliver two dead babies and one with deformities that’s alive; Gov’t refuses to disclose miscarriages or stillbirths around Fukushima (AUDIO)

– Former Energy Dept. Official: People Near Tokyo ‘Were Getting A YEARLY Radiation Dose In About 10 MINUTES’ From Fukushima Releases

– Bloomberg: ‘Near-Chernobyl experience’ for Tokyo even though 200+ kilometers from Fukushima