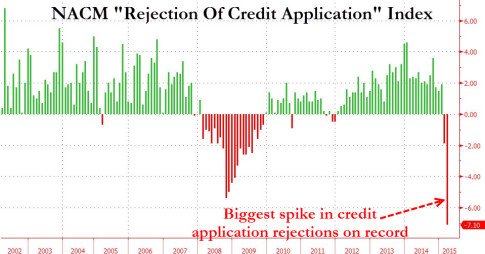 According to the CMI, the Rejections of Credit Applications index just crashed the most ever, surpassing even the credit crunch at the peak of the Lehman crisis.

We are grateful to Alexander Giryavets at Dynamika Capital for pointing us to something which is far more troubling than even the Atlanta Fed’s collapse in Q1 GDP tracking: namely the latest Credit Managers Index for the month of March which “deteriorated significantly over the last two months and current readings stand at the recessionary levels not seen since 2008.”

To be sure, we have previously shown the collapse in consumer debt as reported by the Fed, which as we noted, just suffered its worst month for revolving credit since December 2010 and explains “why the consumer has literally gone into hibernation – it has nothing to do with the weather, and everything to do with the unwillingness to “charge” purchases, which in turn is a clear glimpse into how the US consumer sees their financial and economic future.” 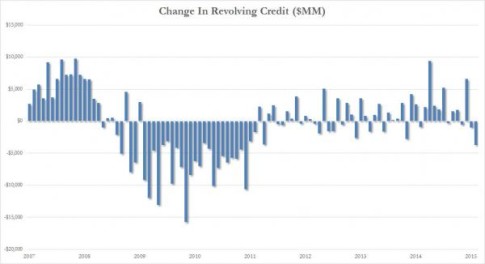 It turns out it may not have been just a matter of demand: apparently something very dramatic has been happening in February and especially in March. Instead of spoiling the punchline, we will leave it to the National Association of Credit Managers to explain what happened:

We now know that the readings of last month were not a fluke or some temporary aberration that could be marked off as something related to the weather. There is quite obviously some serious financial stress manifesting in the data and this does not bode well for the growth of the economy going forward. These readings are as low as they have been since the recession started and to see everything start to get back on track would take a substantial reversal at this stage. The data from the CMI is not the only place where this distress is showing up, but thus far, it may be the most profound.

You mean it wasn’t the weather? “As was the case last month, the majority of the damage was seen in the service sector and this month it is going to be hard to blame it all on the weather or some other seasonal factor.”

Ok, good to know that we were correct in mocking all those “economisseds” who say the recent collapse in seasonally-adjusted (as in adjusted for the seasons… such as winter) data was due to the, well, winter, a winter in which 3 of 4 months were hotter than average!

So what is going on? Well, nothing short of another recession it appears.

The combined score is getting dangerously closer to the contraction zone and has not been this weak in many years (going back to 2010). It is sitting at 51.2 and that is down from the 53.2 noted last month. For most of the last two years, these readings have been in the mid-50s and above—comfortable territory and generally trending up from one month to the next and now there is a very disturbing trend downward. The index of favorable factors slipped substantially, but remains in the mid-range at 55.4. That would be seen as better news if it were not for the fact that these readings had consistently been in the 60s during the last couple of years. It was only August of last year when the reading was a robust 63.8. The most drastic fall took place with the unfavorable factors that indicate the real distress in the credit market. It has tumbled from 50.5 to 48.5 and that is firmly in the contraction zone—a place this index has not been since the days right after the recession formally ended. The signal this sends is that many companies are not nearly as healthy as it has been assumed and that there is considerably less resilience in the business sector than assumed.

Of course, in a world in which the only economic growth comes as a result of new credit entering the economy (as opposed to Fed reserves being stuck in the S&P), the only thing that matters is how easy it is to get credit into the hands of those who need it. As it turns out it has never been more difficult to get credit.

According to the CMI, the Rejections of Credit Applications index just crashed the most ever, surpassing even the credit crunch at the peak of the Lehman crisis.

This can be seen on the chart below.

And without any new credit entering the economy, a recession is all but assured.

More details on what may be the most critical and completely underreported indicator for the US economy. The report continues, with such a dire narrative that one wonders how it passed through the US Ministry of Truth’s propaganda meter:

By far the most disturbing is the rejection of credit applications as this has fallen from an already weak 48.1 to 42.9. This is credit crunch territory—unseen since the very start of the recession. Suddenly companies are having a very hard time getting credit. The accounts placed for collection reading slipped below 50 with a fall from 50.8 to 49.8 and that suggests that many companies are beyond slow pay and are faltering badly. The disputes category improved very slightly from 48.8 to 49, but is still below 50. This indicates that more companies are in such distress they are not bothering to dispute; they are just trying to survive. The dollar amount beyond terms slipped even deeper into contraction with a reading of 45.5 after a previous reading of 48.4. The dollar amount of customer deductions slipped out of the 50s as it went from 51.8 to 48.7. The only semi-bright spot was that filings for bankruptcies stayed almost the same—going from 55.0 to 55.1. This is the one and only category in the unfavorable list that did not fall into contraction territory and that suggests that there are big, big problems as far as the financial security of these companies are concerned.

For those who enjoy tables, here it is: 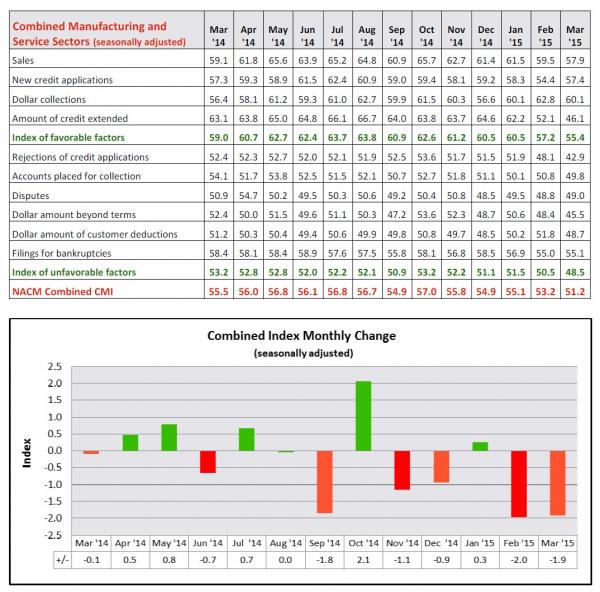 Just in case there was still confusion about what is truly going on when one strips away the daily “S&P500 is at all time highs” propaganda and iWatch infomercials, here is some more doom and gloom from the source:

As stated earlier, the real concerns start to manifest with the unfavorable categories. The rejections of credit applications fell out of the 50s with a resounding thud—going from 50.3 to 43.8. There is most definitely a credit crunch underway and it is now easy to determine what the prime factor is. There are many companies seeking credit that are too weak and there is obviously an abundance of caution showing up in those that issue that credit. The accounts placed for collection held fairly steady and that comes as a bit of surprise—it went from 51.8 to 51.4. The disputes category actually improved a little—going from 47.2 to 48.6, but the important point is that it is still in the contraction category. The dollar amount beyond terms slid drastically from 52.2 to 46.0 and the dollar amount of customer deductions remained stable but at a low rate—moving not at all from the 48.7 that was noted last month. There was also no change in the filings for bankruptcies as it stayed right at 55.1—same as last month.

The big news is access to credit. It is suddenly very hard to get and this looks like the situation that existed at the start of the recession in 2008. The overall economy didn’t look all that bad in late 2008, except that there was a dearth of credit and that soon led to business failures and struggles.

The pattern is the same whether one is discussing the manufacturing or service side—too many seeking credit that are not going to get what they are seeking—either because there are doubts as to their credit status or because those issuing credit are in a very cautious mood. The dollar collections category is more or less stable and still in the 60s—it went from 61.0 to 60.4.

The rejections of credit applications is as miserable as it has been since the depths of the recession—going from 45.9 to 42.0.These are very bad readings and it will take a good long while to climb out of this mess.

No other commentary necessary.

2 thoughts on “‘There Are Big, Big Problems’ – The Shocker Crushing The Economy Revealed”