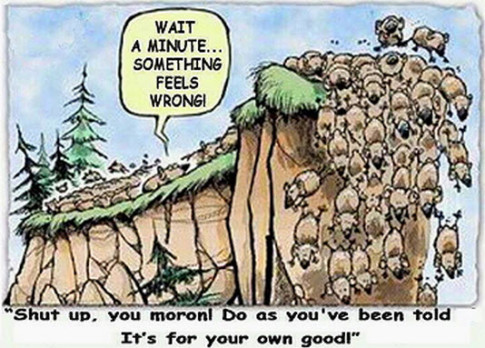 – LEMMINGS LOOK LIKE A PACK OF INDIVIDUALISTS COMPARED TO WALL STREET (The Burning Platform, April 12, 2015):

Since most of you are too lazy to read Hussman’s brilliant analysis every week, I’ve picked out the key paragraphs from this week’s letter. For the really lazy, I’ve bolded the key sentences. The lemmings on Wall Street are still confident as they march in lockstep towards the cliff.

“A group of lemmings looks like a pack of individualists compared with Wall Street when it gets a concept in its teeth.”– Warren Buffett

I had very vocal concerns about valuation during the tech bubble and the housing bubble, well before they burst. But it was a specific combination: extreme valuation coupled with fresh deterioration in market internals – the same combination we observe presently – that provided us with timely evidence that market conditions had shifted to urgent risk at what in hindsight turned out to be the very beginning of the 2000-2002 and 2007-2009 collapses. Those collapses wiped out the entire total return of the S&P 500 – in excess of Treasury bills – all the way back to May 1996, and June 1995, respectively, despite aggressive Fed easing in both instances. Don’t imagine that the current bubble will avoid a similar completion.

At present, the S&P 500 is an average of 114% above the historical norms of the most reliable valuation measures we identify (and the importance of using historically reliable measures can’t be overstated). Even this obscene overvaluation might not be of urgent concern, however, were it not for the fact that our measures of market internals and credit spreads also remain unfavorable at present – as they have been since late-June of last year (see Market Internals Suggest a Shift to Risk Aversion). Notably, the broad market – such as the NYSE Composite – has been in a low-volume sideways distribution pattern since then. In the absence of a jointly favorable shift in market internals and credit spreads, my impression is that the best characterization of market conditions at present is as a broad but possibly incomplete top formation, after a nearly diagonal half-cycle advance, and preceding a potentially violent retreat over the completion of this cycle.

As we observe conditions at present, market internals and credit spreads continue to suggest a subtle shift toward risk aversion. In that environment, awful outcomes occur more often than not. They may not happen immediately, but they tend to happen quickly. The late MIT economist Rudiger Dornbusch characterized the process well: “The crisis takes a much longer time coming than you think, and then it happens much faster than you would have thought.”

About 8% of market history falls into the present set of market conditions (essentially characterized by extreme overvalued, overbought, overbullish conditions that are coupled with deterioration in market internals or credit spreads on our measures). To the extent that air pockets, free-falls and crashes have reasonably identifiable commonalities, this 8% of history captures what we view as the essential features.

Read all of Hussman’s Weekly Letter