– Dust Bowl 2.0: California’s Historic Drought About To Get Even Worse As “Snowpack Melts Early Across The West” (Zerohedge, April 10, 2015):

It has been a bad year for California whose drought is rapidly approaching historic proportions: according to the LA Times, which cites climatologist Michael Anderson, “you’re looking on numbers that are right on par with what was the Dust Bowl.” 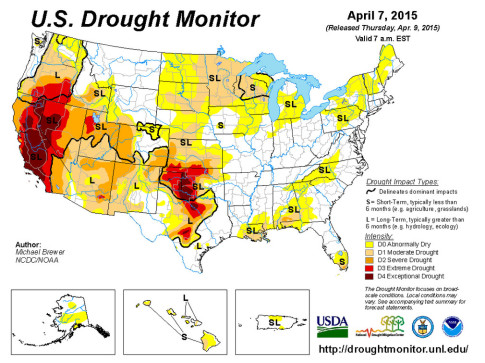 It is about to get even worse. According to the USDA, the west-wide snowpack is melting earlier than usual, according to data from the fourth 2015 forecast by the United States Department of Agriculture’s Natural Resources Conservation Service (NRCS).

“Almost all of the West Coast continues to have record low snowpack,” NRCS Hydrologist David Garen said. “March was warm and dry in most of the West; as a result, snow is melting earlier than usual.”

It is only fitting that while economists blame a “overly cold winter” for sliding GDP, weathermen blame an overly warm winter for the California’s historic drought.

More from the USDA:

Historically, April 1 is the peak snowpack. This year, the peak came earlier. There was little snow accumulation in March, and much of the existing snow has already melted.

“The only holdouts are higher elevations in the Rockies,” said Garen. “Look at the map and you’ll see that almost everywhere else is red.” Red indicates less than half of the normal snowpack remains.

A consequence of the early snowmelt is that Western states will have reduced streamflow later this spring and summer.

In Western states where snowmelt accounts for the majority of seasonal water supply, information about snowpack serves as an indicator of future water availability. Streamflow in the West consists largely of accumulated mountain snow that melts and flows into streams as temperatures warm in spring and summer. National Water and Climate Center scientists analyze the snowpack, precipitation, air temperature and other measurements taken from remote sites to develop the water supply forecasts.

NRCS monitors conditions year-round and will continue to issue monthly forecasts until June. The water supply forecast is part of several USDA efforts to improve public awareness and manage the impacts of climate change, including drought and other extreme weather events. Through the creation of the National Drought Resilience Partnership, launched as part of the President’s Climate Action Plan, federal agencies are working closely with states, tribes and local governments to develop a coordinated response to drought.

Which can only mean one thing: a whole lot of taxpayer money is about to be spent on the “coordinated drought response.”

Here are the details from the Western Snowpack report.

Precipitation during March was well below normal throughout almost the entire West, with the exception of Interior Alaska. Precipitation thus far in the water year (beginning October 1, 2014) is now below normal over most of the West except for some northwestern areas and coastal Alaska. Snowpack has declined significantly since last month throughout the West due to the warm and dry March. Only high- elevation areas in the Rocky Mountains and Interior Alaska retain somewhat near normal snowpack. Streamflow forecasts have dropped since last month due to a lack of snow accumulation during March and an early snowmelt, with most regions now expecting below normal streamflow. Reservoir storage is currently below normal in the Southwest and Nevada, with near to above normal storage elsewhere. 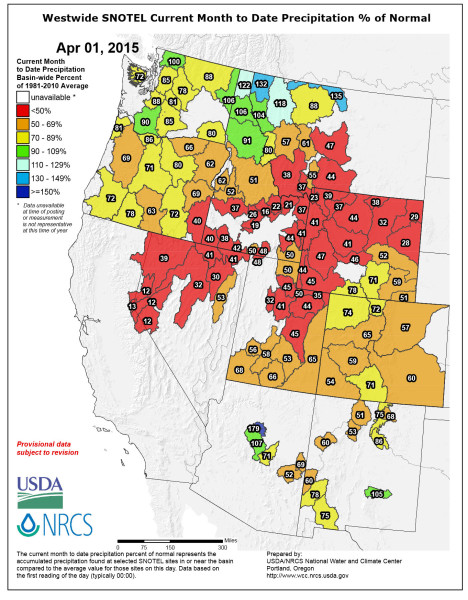 Precipitation for the 2015 water year-to-date is now below normal over most of the West except for some northwestern areas. The dry March has significantly affected this picture since a month ago, when far more of the West was near normal. 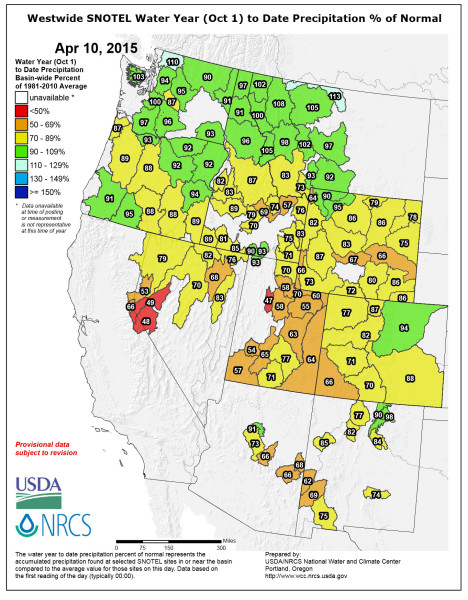 Snowpack at SNOTEL sites and snow courses as of April 1 in the western U.S. and the Columbia Basin in Canada has declined significantly since last month.

Snowmelt has begun early this year throughout most of the West, leading to significant snowpack losses and corresponding increases in streamflow during March.

Although a major storm during the first few days of March struck areas of Utah, Colorado, Arizona, and New Mexico, the resulting snowpack accumulations have since melted.
Western parts of the region still have record-breaking low snowpack, as they have had all winter. Snowpack is nearly gone in Nevada, Utah, Arizona, and much of New Mexico. Only areas of high elevation along the crest of the Rockies – in Colorado, Wyoming, Montana, and British Columbia – retain snowpack in the near normal or only somewhat below normal categories.

Snowpack in Alaska remains below normal in coastal areas and near normal in the Interior.

Streamflow forecasts are moderately to extremely below normal for most of the West. Only a few areas in the Rocky Mountains and Interior Alaska are near normal. Forecasts have dropped significantly since last month. This is due to the warm and dry March, which has led not only to reduced snowpack accumulation but also to early melt. With snowpack melting and streamflow rising already in March, less snowmelt remains for the usual water supply forecast periods beginning in April.

Reservoir storage levels are well below average in the Southwest and Nevada, while they are near to above average elsewhere in the West.

California: Snowpack is at record low levels, which is relied upon as the primary source of the summer water supply. With very little snowmelt runoff, the current reservoir contents will essentially be the amount available for use this summer. The major storage reservoirs for California are at roughly 50% of capacity with very little opportunity to increase.

3 thoughts on “Dust Bowl 2.0: California’s Historic Drought About To Get Even Worse As “Snowpack Melts Early Across The West””