“More evidence that a war is coming.”

McCain is “THEIR” man. 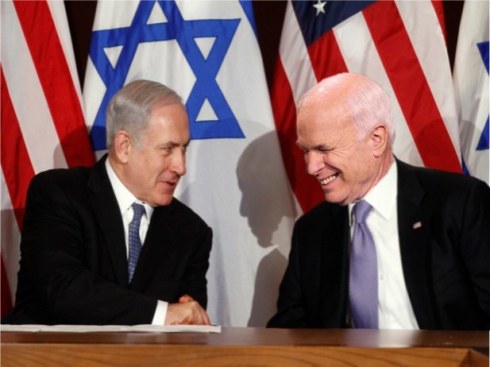 US Senator John McCain has announced he will run for reelection in 2016.

The Arizona Republican made the announcement to run for a sixth term on Monday in an interview with NBC News. He is the chairman of the Senate Armed Services Committee.

McCain has used his position as chairman to criticize President Barack Obama on national security.

“I have never been more concerned about the security of this nation because of the feckless leadership of the president of the United States,” he said.

McCain, 78, will be 80 by Election Day, but he said his Senate career is “just getting started.”

Tea party groups see him as a top challenge in a primary, and conservatives have criticized him as too liberal. He ran for president in 2008.

To win, McCain said he will emphasize issues in Arizona, such as the drought, his work to benefit a copper mine and legislation to reform the Department of Veterans Affairs.

The VA was thrown into turmoil last year amid allegations of misconduct and cover-ups at the VA hospital in Phoenix. Investigators say veterans’ health was jeopardized when employees covered up long wait times for patients.