– When Iran “Deal” Falls Apart, The Pentagon Is Ready: America’s Most Destructive “Bunker Buster” Gets An Upgrade (ZeroHedge, April 4, 2015):

Two weeks ago we noticed something quite “persuasive”: ahead of the culmination of the March 31 April 2 Iran nuclear negotiations, the US had dispatched a huge naval presence to the Persian Gulf as part of “Eagle Resolve” a military exercise held in plain view of the Iranian coastline. The massive operation would consist of tactical exercises from the US Army, Marines, and various other military branches “with simulated portions of the exercise based on a fictional adversary.” Just in case the intention of this wargame was not clear, a CENTCOM official was quick to point out that “the exercise is not intended as a signal to Iran.” Iran quickly got the “non-signal” message and a few days later agreed to a preemptive agreement with John Kerry which has since been revealed, is anything but a “nuclear deal.” 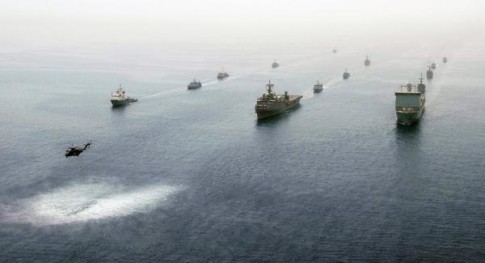 So as the world awaits the outcome of next Iran “deadline”- the June 30 conclusion of the finalization of the Iran deal – the US is already hedging its bets. According to the WSJ, the Pentagon has “upgraded and tested the largest bunker-buster bomb in the U.S. arsenal, senior U.S. officials said, readying a weapon that could destroy or disable Iran’s most heavily fortified nuclear facilities should a nuclear deal fall apart and the White House decide to take military action.”

It turns out as the Nobel peace prize winner and his henchmen were talking peace, the Pentagon is actively preparing for war:

Even while the Obama administration was pursuing a diplomatic agreement with Iran to rein in its nuclear program, the Pentagon was readying the improvements to one of its most destructive conventional weapons, including electronic countermeasures to prevent an adversary from jamming its guidance systems.

“The Pentagon continues to be focused on being able to provide military options for Iran if needed,” a senior U.S. official said. “We have not taken our eyes off the ball.”

As noted previously, U.S. officials are unsure whether the terms of a final accord can be reached before a June 30 deadline. “Officials said major gaps remained over the technical details as well as implementation, and it is unclear if the U.S. Congress will pass legislation challenging the White House’s terms.”

So, just to make sure there is no negotiating stumbling blocks on behalf of Tehran, the US is doing its best to “negotiate” with a gun to Iran’s head. Or, as the case may be, a Massive Ordnance Penetrator, aka MOP.

A brief history of the GBU-57:

This is what the GBU-57 MOP looks like to scale: 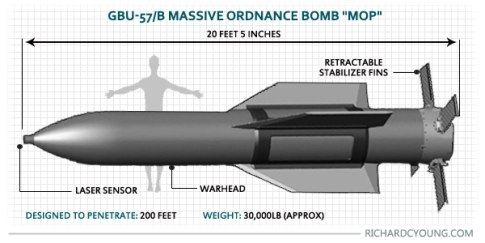 Here is the MOP locked and loaded: 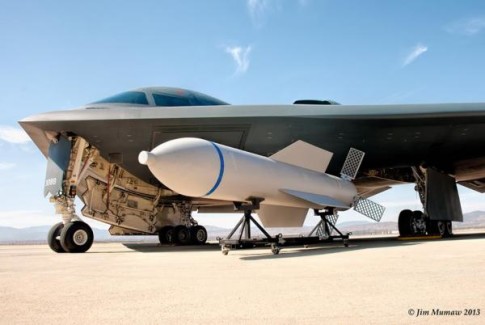 How the MOP is said to work: 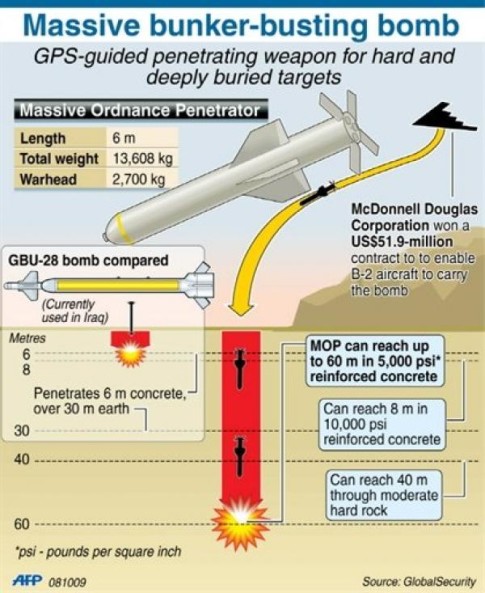 Back in 2012, the WSJ reported that the previous iteration of the 30,000-pound (13,607 kg) bunker buster wasn’t powerful enough to destroy some fortified Iranian nuclear facilities. So work began to upgrade the bomb’s design and guidance systems. That upgrade is now complete.

The Pentagon declined to comment on any improvements to the so-called Massive Ordnance Penetrator, or MOP.

The redesigned bunker-buster is clearly intended to be unleashed on Iran’s mountainous research facilities in a worst case scenario:

The Pentagon designed the bunker buster with heavily fortified sites—including Iran’s Fordow installation—in mind. Fordow is built into a mountain to protect the facility from U.S. or Israeli airstrikes.

To destroy or disable the underground facilities, the Pentagon envisages guiding two or more of the bunker busters to the same impact point, in sequence, extending the weapon’s burrowing power, the officials said.

The MOP is so strong, the WSJ compares its destructive force to a nuclear weapon:

Those upgraded electronic countermeasures, combined with improvements to the weapon’s guidance systems, will allow the weapon to be targeted with a precision previously possible only for far smaller guided bombs in the U.S. arsenal, the officials said. Steering two or more massive ordnance penetrators to a single entry point would have a devastating effect never before seen by a nonnuclear weapon, the officials said.

The White House has repeatedly said that Mr. Obama will need to look at other options if the nuclear talks break down. “If you say all options are on the table, you have to have something on the table that’s credible,” a senior U.S. official said.

What remains unknown is whether Israel is also in possession of the MOP, because while theatrical politics at the top echelons of power suggest a breakdown in US-Israel relations, it is behind the scenes where the real action takes place:

The U.S. has balked at providing its biggest bunker buster bomb to Israel, but Pentagon officials have shared details about its capabilities with their Israeli counterparts, and has shown them videos of the weapon hitting a target during testing.

In one of those videos, which was described by U.S. officials who have viewed it, a massive ordnance penetrator is seen dropping in slow motion toward a large “X” marking the target at an undisclosed test site.

The video then cuts to an image showing an underground bunker buried beneath the “X” and depicts the site’s destruction.

In other words, US officials are just waiting for the right Israeli offer.

As for the question whether the MOP will be actually used, which is basically a question whether the Iran “deal” will fall apart over the next three months, ask Boeing – the maker of the GBU-57 MOP – which stands to benefit (or lose) the most from any war (or lack thereof) with Iran. 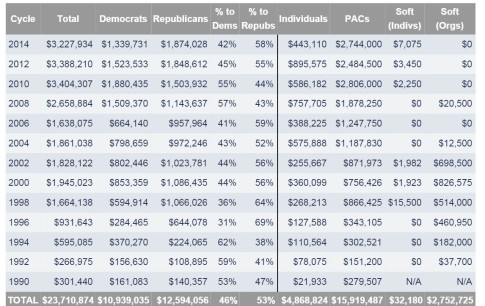 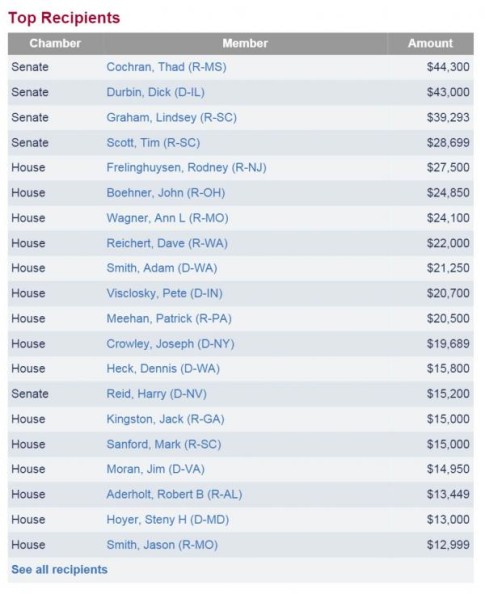 The Pentagon has upgraded and tested the largest bunker-buster bomb in the US, powerful enough to disable Iran’s most heavily fortified nuclear facilities in case of failure to reach a nuclear deal, a senior US official told the Wall Street Journal.

“The Pentagon continues to be focused on being able to provide military options for Iran if needed,” an unnamed senior US official has been quoted as saying. “We have not taken our eyes off the ball.”

According to the Wall Street Journal report, work on the bunker buster (the so-called Massive Ordnance Penetrator, or MOP) started before the latest round of talks with Iran. The most recent testing took place in mid-January, when the improved bunker buster was dropped at a testing site at an undisclosed location by a B-2 bomber that took off from Whiteman Air Force Base in Missouri, officials told the publication.

The Wall Street Journal reported in 2012 that according to Pentagon war planners the 30,000-pound (13,607 kg) bunker buster wasn’t powerful enough to destroy some fortified Iranian nuclear facilities. So work reportedly began to upgrade the bomb’s design and guidance systems.

According to senior officials, the results show the improved bomb—when dropped one on top of the other—is now more capable of penetrating fortified nuclear facilities in Iran or in North Korea, The Wall Street Journal reported. The Pentagon also designed the bunker buster to challenge Iran’s Fordow facility, which is built into a mountain to protect it from potential airstrikes.

Upgraded electronic countermeasures have been added to the weapon to prevent jamming of its guidance systems by Iran, the source said. Electronic jammers could be allegedly used to throw an incoming bomb off target.

It’s believed that the above mentioned measures will allow the destructive weapon to be targeted with a precision previously possible only for far smaller guided US bombs.

Pentagon officials have allegedly shared details about the bomb’s capabilities with Israeli counterparts, showing demo videos of the weapon hitting a target during testing. In one of the videos, described by US officials, a massive ordnance penetrator is seen dropping toward a large “X” target at an undisclosed test site. The picture then cuts to depict the site’s destruction.

On Thursday, after 18 months of negotiations, Iran came to a preliminary agreement with China, Russia, France, UK, US and Germany (P5+1) on Tehran’s nuclear program. US President Barack Obama called the long-awaited agreement, reached in Switzerland, a “historic understanding” that would prevent Iran from obtaining nuclear weapons, while getting relief from international sanctions. The sides are expected to sign an agreement by June 30.

In an effort to “sell” the deal to the American public, Obama said he sees it as the best way to avoid another war in the Middle East. The US has fought long wars in Iraq and Afghanistan since 2001, and is currently busy carrying out airstrikes against the so-called Islamic State militant group.

“Do you really think that this verifiable deal, if fully implemented, backed by the world’s major powers, is a worse option than the risk of another war in the Middle East?” Obama said.

Listing three options for curbing Iran’s nuclear ambitions, he said that while the first would “peacefully prevent Iran from obtaining a nuclear weapon”, the second option is: “We can bomb Iran’s nuclear facilities, thereby starting another war in the Middle East and setting back Iran’s program by a few years – in other words, setting it back by a fraction of the time that this deal will set it back.”

The preliminary agreement reached on Thursday envisions Iran operating just one uranium enrichment facility: the Natanz facility that will be scaled down to 5,000 centrifuges.

The fortified facility at Fordow will be converted to a nuclear physics and technology research center, while the reactor at Arak is to be redesigned as a heavy-water research reactor, and will not produce weapons-grade plutonium. All spent fuel from the reactor will be exported.

1 thought on “When Iran “Deal” Falls Apart, The Pentagon Is Ready: America’s Most Destructive ‘Bunker Buster’ Gets An Upgrade”