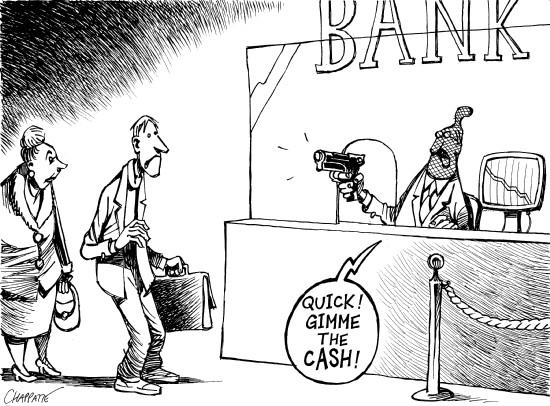 Back in 2013, when one cuts through the rhetoric and posturing, what the Cyprus depositor bail-in and subsequent capital controls were all about, was an attempt to confiscate deposits of ultra-wealthy Russian billionaires held the banks of this beloved by the Russian oligarchy offshore tax haven. At least that was the theory: in practice the wealthiest Russians got advance notice of what the Greek government in collaboration with the Eurogroup was planning, and quietly moved their funds to even safer offshore venues, leaving the local population to pick up the pieces.

Fast forward two years later, when Greece is on the verge of complete monetary collapse and which is now scrambling to “borrow” funds from local pensions and other public sources of scarce capital just to remain in compliance with IMF debt repayments and avoid a hard default. In fact, according to some, Greece may not have the funds to make its next mandatory payment due on April 9 to the IMF with the long overdue Greek exit from the Eurozone to follow in due course.

Well, maybe not, because Germany has been kind enough to provide an idea where the foundering Greek “radical leftist” government can find some additional funds: by freezing and raiding the bank accounts of wealthy Greeks. Of course, the legal loophole provision is that only those suspected (not convicted) of tax fraud would be eligible for such an asset  freeze, however since in Greece virtually nobody pays the amount of tax they should (recall a month ago the WSJ wrote: “Greeks consider taxes as theft,” said Aristides Hatzis, an associate professor of law and economics at the University of Athens. “Normally taxes are considered the price you have to pay for a just state, but this is not accepted by the Greek mentality”) , this is essentially a carte blanche to freeze and raid the funds of the wealthiest Greeks who have bank accounts in Germany (and soon in all other European nations) no questions asked.

Germany would be willing to freeze the bank accounts of wealthy Greeks suspected of tax fraud, Economics Minister Sigmar Gabriel said in a newspaper interview on Saturday.

“We have offered to freeze the bank accounts of wealthy Greek citizens that owe taxes to their homeland. The offer stands, but for that [to happen] the Greek financial authorities need to get active,” Mr. Gabriel told the German daily Rheinische Post.

Europe is willing to help Greece, but the Greek government’s acceptance of previously agreed upon reforms is a prerequisite, he reiterated. Greece’s problems aren’t a result of Troika initiatives, referring to the International Monetary Fund, the European Union and the European Central Bank, he added.

“Greece is a victim of its own economic and political elite,” Mr. Gabriel said.

But wait, we thought it was “austerity” that was to blame for everything. Does Mr. Gabriel, gasp, suggest that “austerity” is the name that crony, corrupt, incompetent European politicians have been giving to their actions to enable the unprecedented theft and transfer of wealth that has taken place in Europe in the past five years?

In this case Gabriel is spot on with this assessment – one which we said was precisely the case two years ago – and as such Germany has a solution: a one-time, sovereign bail-in, funded by the wealthiest Greeks.

And here it gets interesting, because suddenly the options becomes very clear for said wealthy, tax-avoiding Greeks: align with Russia, or suffer deposit confiscation at the hands of Germany, or Switzerland, or France, or any other nation that has been alienated by the Syriza government.

To be sure Germany tried to smooth out this contingency

Turning to Russia, Mr. Gabriel said he doubts Greece would seek to replace European partners with an allegiance to Russia.

“Even if I try, I can’t imagine that anyone in Athens is seriously considering turning their backs on Europe to throw themselves into the arms of Russia. And I also doubt that Moscow feels any pressing need to gladly fulfill some of Greece’s financial pipedreams, given the economic and financial situation there,” he said.

Perhaps, but keep in mind that it was the threat of the world’s wealthiest losing all their accumulated wealth that forced the Fed and its central bank peers to launch the biggest ever bail out of capitalism in 2008, at the cost of destroying the livelihood for hundreds of millions of middle-class Americans and Europeans. Because when there is nothing but desperation left, the rich do silly, self-serving things.

The question is will Greece’s wealthiest make it clear to Tsipras that their money is off limits, and unless he can find a Eurofacing resolution that preserves their wealth, then he should promptly turn to Putin.

With Greek money about to run out in the coming days, we should have the answer very soon.