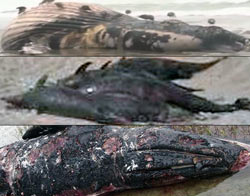 New Mexico St. Univ., Mar 15, 2015 (emphasis added): What’s Killing Baja’s Marine Animals? Dead gray whales and dolphins. Corpses of sea lions, birds and sea turtles decomposing on the beach. Since the beginning of the year, the coasts of Baja California have been the scene of multiple discoveries of dead marine animals. The latest find was reported last week… 55 dead dolphins and 4 sea lions… [The gov’t will] probe the reasons for the mysterious deaths. In mid-January… 550 dead sea birds and 4 dead sea lions near San Felipe. Another zone of mystery surrounds the Laguna Ojo de Liebre… where 150 dead sea turtles were discovered at the end of January. About two weeks earlier, 14 lifeless gray whales (13 babies and 1 adult) and 16 dead sea turtles were found in the same area… Mexican authorities hypothesized that sea turtles… could be succumbing to hypothermia [and] baby gray whales were dying from lack of nourishment… [They] migrate to Baja California from northern Pacific waters…

AP, Feb. 1, 2015: Cold temperatures are suspected of killing some 150 sea turtles found in a lagoon of Mexico’s Baja California [the] environmental protection agency said [warm waters are blamed for record-setting deaths of California sea lions and West Coast sea birds ]… it would be difficult to determine the exact cause of death… investigators also would try to determine whether some sort of contamination might have played a role. In mid-January, federal inspectors found the bodies of 14 gray whales.

NBC San Diego, Mar 20, 2015: A dead gray whale was found floating in the waters near Torrey Pines State Beach Thursday morning, San Diego Lifeguard officials confirmed. The young whale [was] approximately 15 to 20 feet in length – Reporter: “Because it does not look like it had anything to do with humans, they believe that maybe the whale just got sick and died.”

California Gray Whale Coalition, Nov. 2014: The coast’s winter whale watching season brings real fear for visiting humpbacks and grey whales encountering “radiation hot spots” along West Coast waters as they migrate to and from Alaska and Mexico. The central Oregon coast’s whale watching training features more than 100 volunteers at 25 whale-watching sites… this year’s whale-watching volunteers have been trained in the dangers of radiation… there has been a rash of dead humpback whales washing-up along central Oregon…

KION, Jul 3, 2014: A 35-foot-long humpback whale has washed up dead on a Central California beach… cause of death has not been determined. – Reporter: “Researchers say the amount of whales found in distress this year is significantly more than in previous years… They usually only get 5 reports of entangled whales in an entire year. This year there have already been 8.”

ABC San Francisco, May 22, 2014: Dead Baby Humpback Whale Washes Ashore… “They’re actually endangered,” said Sue Pemberton with the California Academy of Sciences. “So it’s really important, every single one that dies, it’s important to know why.”… unlocking the mystery of why she died so young, only half the size of a full-grown humpback.