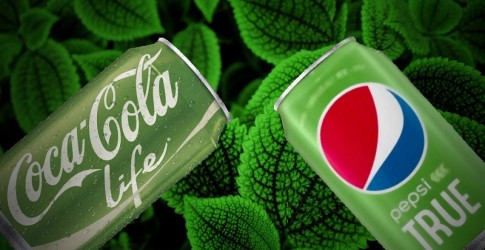 The processed food industry is seeking to turn back the global movement toward organic and non-GMO food by promoting its often unwholesome products as healthful and nutritious. In mid-March the Associated Press released a detailed report on how Coca-Cola commissioned fitness and nutrition “experts” to promote its high-fructose corn syrup-laden soft drinks as part of a healthy diet.

Through the month of February, blogs and newspapers published pieces from the writers in observance of “Healthy Heart & Black History Month.”

“We have a network of dietitians we work with,” a Coke representative told the AP, who would not say how much the company pays such spokespersons. “Every big brand works with bloggers or has paid talent.”

The most recent development in the food giants’ undeclared campaign to be perceived as wholesome involves the use of the purportedly “natural” sweetener Truvia into products in lieu of the more notorious aspartame or sucralose additives.

Such a promotional campaign rests largely on the Truvia brand’s heavily promoted yet dubious association with stevia and an overarching ignorance of how the sweetener is produced, let alone its potential effects upon ingestion.

Like aspertame (Nutrasweet, Equal) and sucralose (Splenda), both of which are neurotoxins (e.g. here, here, and here), Truvia is approved as safe for human consumption by the Food and Drug Administration, which might be immediate cause for concern. The sweetener is also made by Cargill, the major fertilizer manufacturer. As Natural Newsobserves, “a study published in the journal PLOS ONE (1) found that Truvia acts as a potent insecticide that kills fruit flies which consume it.”

In 2014 the New York Timespublished a detailed (and largely sympathetic) examination of the sweetener research and development industry. In that report the paper of record noted that “Truvia contains very little stevia, by weight, and briefly acknowledges “its main ingredient” as being “erythritol,” a sugar alcohol.

Cargill makes the erythritol that comprises Truvia from GMO corn, or, more specifically, “yeast that may be fed with genetically modified corn sugar,” the Times notes.

In fact, the sweetener contains almost no stevia. It is made from about 99.5% erythritol, and 0.5% rebiana, an extract from the stevia plant. Thus, fruit drinks are now being sweetened with a GMO-based substance that can kill bugs and cleverly promoted as “natural” by including stevia as a trace element. Moreover, since the adoption of a given sweetener for us in a host of beverages is a key objective of its manufacturer, Old Orchard’s use of Truvia might be better seen as a prelude for its use in a much wider array of other juices and soft drinks.

In 2013 Cartill resolved a deceptive marketing lawsuit for presenting Truvia as a “natural” sweetener. As part of the settlement the company agreed to set up a fund of $5 million to refund purchasers and change its labeling to more accurately describe how Truvia is produced.

As the consumer departure from unnatural nourishment picks up steam, the transnational food cartel will be seeking to head off the move in increasingly deceptive ways–some of which could actually endanger one’s health. This is a battle that pits the food manufacturers’ spinmeisters and advert execs against the broader public. Coca-Cola’s attempt to pass its beverages off as healthy and Cargill’s promotion of a pesticide as safe and natural are early examples of exactly how low this sector will go to maintain market share and the bottom line. Caveat emptor.

Professor James F. Tracy is an Associate Professor of Media Studies at Florida Atlantic University. James Tracy’s work on media history, politics and culture has appeared in a wide variety of academic journals, edited volumes, and alternative news and opinion outlets. James is editor of Union for Democratic Communication’s Journal Democratic Communiqué and a contributor to Project Censored’s forthcoming publication Censored 2013: The Top Censored Stories and Media Analysis of 2011-2012. Additional writings and information are accessible at memoryholeblog.com.

1 thought on “The Empire Strikes Back: Poison Is ‘Natural’”