We warned yesterday that the “whisper expectation is for a NFP print that will be well below consensus, somewhere in the mid-100,000s if not worse now that the bartender hiring spree is over”, and we were right: moments ago the BLS reported that in March a paltry 126K jobs were added, nearly 50% below the 245K expected, and the lowest monthly increase since March 2013.The unemployment rate was unchangned at 5.5%.

Most importantly this ends any speculation about a rate hike in mid 2015, or ever for that matter, as virtually all Fed credibility is now lost. 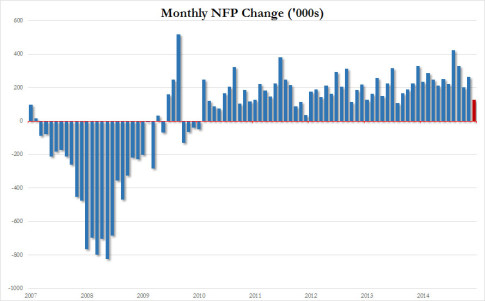 And before you ask, no it wasn’t the weather: 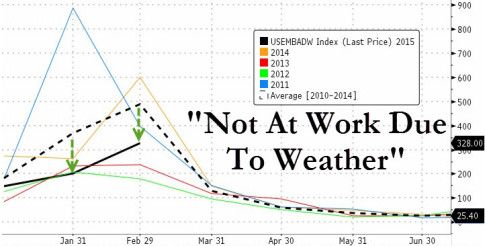 More from the report:

Total nonfarm payroll employment increased in March (+126,000). Over the prior 12 months, employment growth had averaged 269,000 per month. In March, employment continued to trend up in professional and business services, health care, and retail trade, while employment in mining declined. (See table B-1.)

In March, employment in retail trade continued to trend up (+26,000), in line with its prior 12-month average gain. Within retail trade, general merchandise stores added 11,000 jobs in March.

Employment in mining declined by 11,000 in March. The industry has lost 30,000 jobs thus far in 2015, after adding 41,000 jobs in 2014. The employment declines in the first quarter of 2015, as well as the gains in 2014, were concentrated in support activities for mining, which includes support for oil and gas extraction.