“From the Intercept…..TSA’s list of how to spot a terrorist..

I have known many who show some of these symptoms due to fear of flying…..evidently, anyone can be labeled a terrorist. 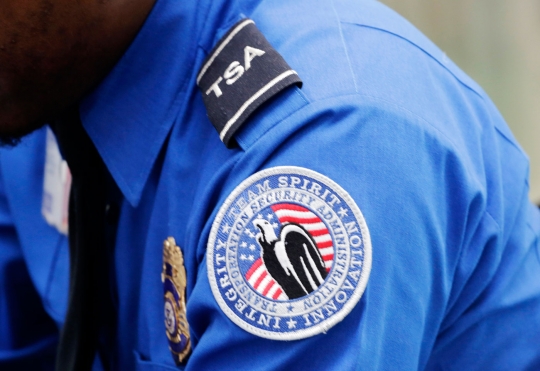 These are just a few of the suspicious signs that the Transportation Security Administration directs its officers to look out for — and score — in airport travelers, according to a confidential TSA document obtained exclusively by The Intercept.

The checklist is part of TSA’s controversial program to identify potential terrorists based on behaviors that it thinks indicate stress or deception — known as the Screening of Passengers by Observation Techniques, or SPOT. The program employs specially trained officers, known as Behavior Detection Officers, to watch and interact with passengers going through screening.

The document listing the criteria, known as the “Spot Referral Report,” is not classified, but it has been closely held by TSA and has not been previously released. A copy was provided to The Intercept by a source concerned about the quality of the program.

The checklist ranges from the mind-numbingly obvious, like “appears to be in disguise,” which is worth three points, to the downright dubious, like a bobbing Adam’s apple. Many indicators, like “trembling” and “arriving late for flight,” appear to confirm allegations that the program picks out signs and emotions that are common to many people who fly. 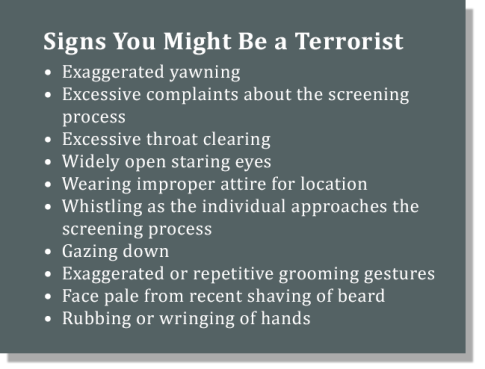 A TSA spokesperson declined to comment on the criteria obtained by The Intercept. “Behavior detection, which is just one element of the Transportation Security Administration’s (TSA) efforts to mitigate threats against the traveling public, is vital to TSA’s layered approach to deter, detect and disrupt individuals who pose a threat to aviation,” a spokesperson said in an emailed statement.

Since its introduction in 2007, the SPOT program has attracted controversy for the lack of science supporting it. In 2013, the Government Accountability Office found that there was no evidence to back up the idea that “behavioral indicators … can be used to identify persons who may pose a risk to aviation security.” After analyzing hundreds of scientific studies, the GAO concluded that “the human ability to accurately identify deceptive behavior based on behavioral indicators is the same as or slightly better than chance.”

The inspector general of the Department of Homeland Security found in 2013 that TSA had failed to evaluate SPOT, and “cannot ensure that passengers at United States airports are screened objectively, show that the program is cost-effective, or reasonably justify the program’s expansion.”

Despite those concerns, TSA has trained and deployed thousands of Behavior Detection Officers, and the program has cost more than $900 million since it began in 2007, according to the GAO.

The 92-point checklist listed in the “Spot Referral Report” is divided into various categories with a point score for each. Those categories include a preliminary “observation and behavior analysis,” and then those passengers pulled over for additional inspection are scored based on two more categories: whether they have “unusual items,” like almanacs and “numerous prepaid calling cards or cell phones,” and a final category for “signs of deception,” which include “covers mouth with hand when speaking” and “fast eye blink rate.

Points can also be deducted from someone’s score based on observations about the traveler that make him or her less likely, in TSA’s eyes, to be a terrorist. For example, “apparent” married couples, if both people are over 55, have two points deducted off their score. Women over the age of 55 have one pointed deducted; for men, the point deduction doesn’t come until they reach 65.

Last week, the ACLU sued TSA to obtain records related to its behavior detection programs, alleging that they lead to racial profiling. The lawsuit is based on a Freedom of Information Act request the ACLU filed last November asking for numerous documents related to the program, including the scientific justification for the program, changes to the list of behavior indicators, materials used to train officers and screen passengers, and what happens to the information collected on travelers.

“The TSA has insisted on keeping documents about SPOT secret, but the agency can’t hide the fact that there’s no evidence the program works,” said Hugh Handeyside, staff attorney with the ACLU National Security Project, in a statement announcing the lawsuit.

Being on the lookout for suspicious behavior is a “common sense approach” that is used by law enforcement, according to TSA. “No single behavior alone will cause a traveler to be referred to additional screening or will result in a call to a law enforcement officer (LEO),” the agency said in its emailed statement. “Officers are trained and audited to ensure referrals for additional screening are based only on observable behaviors and not race or ethnicity.”

One former Behavior Detection Officer manager, who asked not to be identified, said that SPOT indicators are used by law enforcement to justify pulling aside anyone officers find suspicious, rather than acting as an actual checklist for specific indicators. “The SPOT sheet was designed in such a way that virtually every passenger will exhibit multiple ‘behaviors’ that can be assigned a SPOT sheet value,” the former manager said.

The signs of deception and fear “are ridiculous,” the source continued. “These are just ‘catch all’ behaviors to justify BDO interaction with a passenger. A license to harass.”

The observations of a TSA screener or a Behavior Detection Officer shouldn’t be the basis for referring someone to law enforcement. “The program is flawed and unnecessarily delays and harasses travelers. Taxpayer dollars would be better spent funding real police at TSA checkpoints,” the former manager said.

A second former Behavior Detection Officer manager, who also asked not to be identified, told The Intercept that the program suffers from lack of science and simple inconsistency, with every airport training its officers differently. “The SPOT program is bullshit,” the manager told The Intercept. “Complete bullshit.”