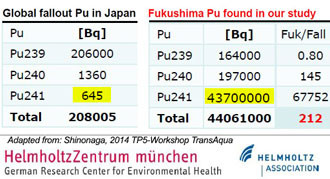 Taeko Shinonaga, head of Radioanalytical Laboratory at Helmholtz Zentrum Munchen (research institution founded jointly by Germany’s Federal Ministry of Education & Research and Bavaria’s Finance Ministry), scientists from Technische Universitat Munchen (Germany), Verhandlungen der Deutschen Physikalischen Gesellschaft 2013 meeting (emphasis added): Detection of long-lived plutonium isotopes in environmental samples by Accelerator Mass Spectrometry (AMS) — Plutonium isotopes 239Pu, 240Pu and 242Pu are anthropogenic radionuclides emitted into the environment by nuclear activities. Pu is accumulated in the human body and hence, poses a considerable hazard to human health. Due to the long half-lives, these isotopes are present in the biosphere on large time scales and a build-up can be expected. Therefore it is important to study the contamination pathway of Pu into the drinking water… a method to detect long-lived Pu isotopes by Accelerator Mass Spectrometry (AMS) is being developed. AMS requires only few milligrams of sample material… Consequently, more samples from different locations can be taken which is essential when searching for locally increased Pu concentrations as in the Pacific Ocean after the Fukushima accident… Samples from different locations in the Pacific Ocean and from the snow-hydrosphere are planned…

Scientists from Lawrence Berkeley National Lab and Univ. of Notre Dame, 2014:  Interstitial incorporation of plutonium into a low-dimensional potassium borate… [E]vents such as the catastrophe at the Fukushima Daiichi nuclear plant in Japan [have] resulted in the contamination of large areas of oceans, ground-water, soils, and sediments by actinides, such as uranium and plutonium… migration of actinides [is] an important environmental concern… Knowledge of the incorporation mechanisms of actinides into… natural materials is therefore required… for predicting the migration of radionuclides…

European Commission Joint Research Centre (pdf), 2014: [The Joint Research Centre] is studying emerging safety issues…examining mixed oxide (MOX) properties [and] preparing further severe accident studies on specific aspects of the Fukushima accident [such as] off-vessel fuel-concrete interactions… Japanese Atomic Energy Agency (JAEA) selected a JRC-developed method as one of the most suitable approaches to characterise [Fukushima’s] molten fuel… This characterisation is an international obligation during the decommissioning phase, according to IAEA safeguards. Japanese researchers are now developing and optimising the methodology to quantify special nuclear materials in particle-like debris of the molten reactor fuel.