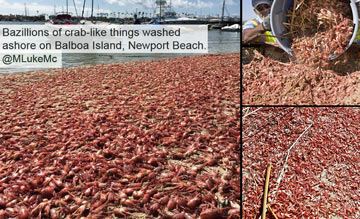 – Dead sea creatures “covering the sand with a sea of red” on California beach; Witnesses: “Bazillions of crab-like things washed ashore… I’ve never seen these before, it’s incredible” — ‘Glow in the dark’ organisms recently stranded nearby; Official: “No one here has ever seen it!” (VIDEO) (ENENews, March 23, 2015):

Orange County Register, Feb 25, 2015 (emphasis added): Tiny crabs still coming in waves off Balboa Island — Thousands… created a rim of red along the shoreline, scattered on the sand along the sleepy seaside of Balboa Island in Newport Beach… Experts say the crabs – which are about 1-to 3-inches long – haven’t been seen in the area for decades… The pelagic crabs are the latest in a year of odd sightings… glow-in-the-dark organisms called pyrosomes washed ashore in September, and before that a blue, jellyfish-like creatures…

Newport Beach Independent, Feb 26, 2015: Thousands of tiny crabs that look like mini lobsters washed up on the shores of Balboa Island this week, covering the sand with a sea of red… They appeared on Balboa Island several weeks ago and then disappeared, but have reappeared. Most appear to have washed ashore dead, but many are still swimming in… crews have been scooping up [remains].

LA Times, Jan 22, 2015: [T]housands of candy-red crabs rarely seen in coastal Southern California have washed ashore in Newport Beach… this marks the first time in years that [Southern California Marine Institute director Daniel Pondella] has heard of them being seen in Southern California. “This is the first warm year we’ve had in quite awhile,” he said. “It could just be a sign of the warm water we’re currently experiencing.”… “I’ve never seen these things before,” [Newport Beach resident Darren Zinter] said. “It’s incredible.”

Tweet from @ABC7Greg, Feb 23, 2015: Thousands of dead crabs washed up on shore on #BalboaIsland. Residents want to know why! (Photo: Tim Sullivan) @ABC7

More on the pyrosomes:

1 thought on “Dead sea creatures ‘covering the sand with a sea of red’ on California beach; Witnesses: ‘Bazillions of crab-like things washed ashore …’”