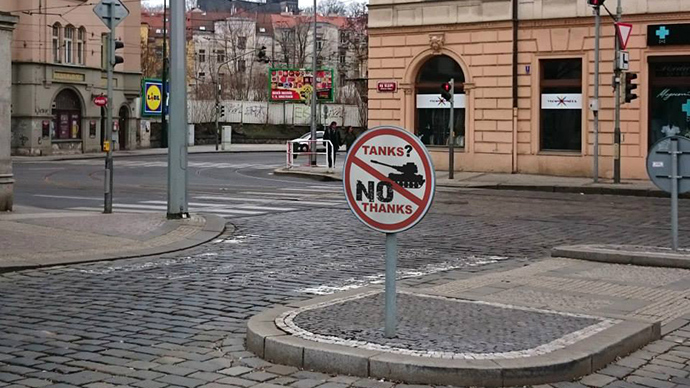 Czech anti-war activists have launched the ‘Tanks? No thanks!’ campaign to protest the procession of US Army hardware through the Eastern European country. They say it has been turned into a “provocative victory parade” near the Russian border.

The American military vehicles, which took part in NATO drills in Poland, Lithuania and Estonia, plan to cross the territory of the Czech Republic between March 29 and April 1 on their way to a base in the German city of Vilseck.

The exercise, entitled the ‘Dragoon Ride,’ will involve over a hundred Stryker vehicles, which the US is expected to station in Europe, and will see the convoy stop in a new city every night. Last week, it was authorized by the Czech government, without any debate in the parliament, Pressenza news agency reported.

The US procession has been labeled “an unnecessary and dangerously provocative military maneuvers, which only increase international tension” on the ‘Tanks? No thanks!’ page on Facebook.

The campaigners believe that a simple relocation of vehicles has been turned into “a victory parade” as the US convoy is expected to “organize activities to impress local residents with their military power.”

“The last time that vehicles like this came to the Czech Republic, they were Soviet tanks coming to crush moves towards democracy in 1968. We don’t want such vehicles from foreign armies coming here ever again,” Tana Bednarova from the ‘World without Wars and without Violence’ organization, which supports the campaign, said.

Bednarova has also slammed the expansion of NATO to the east, saying that if the US and its allies really “wants to create security in the world then Russia and China and all other countries of the world should be invited to join.”

Czech communists speaking out against the ride say it will only cause traffic jams and annoy locals. Fearing that protesters could stage “provocations”, the Czech government, according to local media, has even instructed its own military to protect the US military convoy as it crosses the country.

Besides their activity on social networks, the activists have placed fake road signs, with a tank in a red circle and a red line though it, along the announced route of the US convoy.

The Stryker vehicles are usually transported by rail, but it was decided that they would take a ride through Eastern Europe to demonstrate a US commitment to NATO and its allies in the region.

According to Lt. Gen. Ben Hodges, the US Army Europe commander, it’s important for the American military to show that it “can move a lot of capability a long distance” after Russia relocated thousands of its troops during a massive domestic drill earlier in March.

“The whole purpose … is to assure those allies that live closest to the Bear that we are here,” Hodges said of the maneuvering. “President Putin exercises freedom of movement all the time. He moves troops and stuff around Russia whenever he wants to.”

The US move comes shortly after the one-year anniversary of Russia’s absorption of the Republic of Crimea, with tensions between Moscow and the West remaining high over the conflict in Ukraine. Despite failing to provide any significant proof, the US and EU claim that Russia is fueling rebellions in eastern Ukraine with military supplies and troops, while the Kremlin is denying all allegations.

This weekend Russia completed its nationwide military drills that saw over 80,000 troops all over the country put on high alert to conduct exercises, which involved over 10,000 vehicles, 65 warships, 16 support vessels, 15 submarines, 200 warplanes and helicopters.