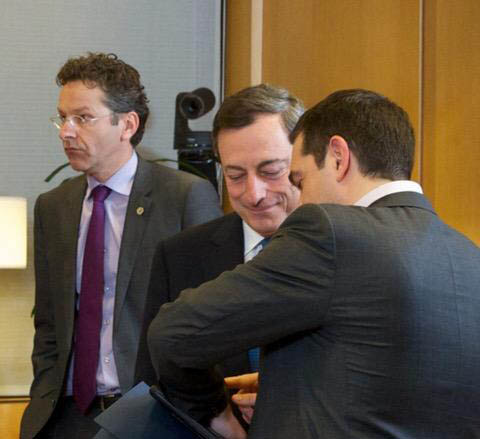 On Friday, the main catalyst that launched the early ramp in the EURUSD, subsequently sending both the Dax over 12,000, and the US stock market soaring, was speculation and hope that the latest round of Greek talks on late Thursday night ahead of tomorrow key meeting between Tsipras and Merkel in Berlin, had gone well, and there was a reason to be optimistic about the near-term for a Greece which increasingly more see as on the verge of expulsion from the monetary union. We explained as much, although we added the provision that at this point it is likely too late to do much if anything about Greece in “German DAX Surges Over 12,000 On Greek Optimism, But The Money Has Run Out.”

Now, courtesy of reporting by the FT, we can also rule out any of the so-called optimism in the aftermath of Thursday’s talks because as Peter Spiegel reports, not only was there no real consensus, but the talks “ended in disarray”, and even though “Greece’s prime minister and fellow Eurozone leaders emerged from a meeting early on Friday morning touting a breakthrough agreement to unlock much-needed bailout funds for Athens — only to fall into disagreement hours later about what it all meant.”

Two days of intensive and occasionally heated negotiations at an EU summit in Brussels amounted to little more than a repeat of talks a month ago between eurozone finance ministers that officials then also hailed as the definitive agreement to get the final bailout review under way.

And the punchline, “so similar were the two deals that, much like the one finalised last month, leaders involved in the talks could not agree on what was agreed within 12 hours after a late-night meeting aimed at resolving all differences.”

The underlying problem for Greece, as we have been writing ever since October, is that the country is not only out of money, but it is now almost $4 billion in the hole. It is, in effect, insolvent. Which is why Greece is now desperate to walk back on all of its election promises because having lost the one trump card it had, namely to default on its Eurosystem debt (precisely what the infamous Varoufakis “middle finger” speech was all about), or exist the Eurozone on its own terms, Greece is now scrambling to survive day to day, even as its bank run threatens to implode its banks at any given moment. More from the FT:

Angela Merkel, the German chancellor, made clear at a post-summit news conference that the starting point for Alexis Tsipras, Greek prime minister, was a December 10 inventory of incomplete reforms promised by the previous Greek government. “The Greek government has the opportunity to pick individual reforms that are still outstanding as of 10 December and replace them with other reforms if they . . . have the same effect,” Ms Merkel said.

It is a potentially incendiary demand since the document Ms Merkel referred to — a letter written by Greece’s then centre-right prime minister Antonis Samaras and his finance minister Gikas Hardouvelis — was the focus of particular scorn for Mr Tsipras’s far-left Syriza party on the campaign trail.

Mr Tsipras insisted at his own press conference that Ms Merkel was mistaken. “Forget the commitment of the former government. There are no austerity measures. There is no letter of Hardouvelis,” Mr Tsipras argued. “I asked [the other leaders]: do you expect me to . . . go through this evaluation and implement measures that Mr Samaras was not able to implement? The answer was no.”

No, Merkel is not mistaken as will be made abundnatly cleat tomorrow during the Berlin press conference after the Merkel-Tsipras meeting, which may well lead to the Euro losing all of its sharp gains achieved on Friday due to another dose of premature Greek optimism.

As a result the biggest problem for Syriza’s government, which still has preserved its pre-election popularity, is that any minute now both Merkel and Tsipras will make the formal announcement that the hated Troika is coming back. That, together with the realization that the current government is nothing but a continuation of the Samaras regime, will likely lead to a new round of social unrest culminating perhaps with another general election.

According to people briefed on the talks, Mr Tsipras opened with demands for additional cash with few strings attached, acknowledging his government may not make it to the end of April without an injection of bailout funds. But his push lasted only the first 10 minutes before the other leaders convinced him it was unachievable. Instead, much of the session focused on logistical arrangements in Athens, where Greek officials have thrown up hurdles to international bailout monitors seeking to access data to evaluate the country’s reform efforts.

Mr Draghi was particularly incensed, telling Mr Tsipras he believed the inspectors — from the ECB, European Commission and International Monetary Fund — had been badly treated by their hosts. Mr Tsipras countered that allowing such access would be a violation of Greek sovereignty. But he relented after Ms Merkel noted all IMF members are subject to annual reviews involving access to a country’s books.

The Greek finance ministry, meanwhile, signalled it was adopting a new conciliatory stance, saying officials “look forward to receiving” requests from the inspectors and would respond “in the same constructive spirit”.

So yes, the Troika is on its way. As it the final final German ultimatum to Greece. Earlier today, Volker Kauder, head of Chancellor Angela Merkel’s party bloc in parliament, told Handelsblatt in an interview that Greece should use this “last chance” to stay in euro by presenting reform proposals that creditors can accept. Kauder also said that Greece can rule out a third bailout “under current circumstances” adding that the Greek government needs to step up efforts to raise taxes, scrap “nonsensical” tax privileges, including those for shipowners (for more on the latter read “Why Greek Shipping Billionaires Are Sweating“).

As for tomorrow’s critical, and potentially make or break, meeting between Tsipras and Merkel in Berlin, here is what Kathimerini said earlier:

In a statement to Sunday’s Kathimerini, Tsipras said the meeting was an opportunity for the two leaders to talk without pressure. The meeting “will not be pressurized by negotiations,” the premier said. “And this is very significant because we can both discuss the important issues that are burdening Europe as well as improving bilateral relations between the two countries.”

Tsipras highlighted a “unique opportunity to pursue changes which previous governments did not dare to attempt, either because they were committed to powerful interests or because they did not have popular support.”

What he really means is that tomorrow is when the lies and can kicking end, and either Tsipras capitulates fully, and irrevocably, in public, without a hint of any doubt as to who is calling the shots thereby burning all pre-election promise bridges, or Greece will be out of the Eurozone in a matter of days if not hours.

Indeed, the following caption we presented first on Friday is more relevant now than ever before.