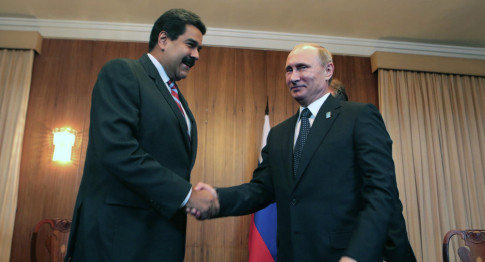 Venezuelan President Nicolas Maduro expressed confidence that Caracas and Moscow can achieve more than they have over the past 61 years of diplomatic relations.

MOSCOW (Sputnik) — Caracas is ready to cooperate closely with Moscow within the framework of the UN Security Council, and hopes that the Russian head of state will pay Venezuela a visit, the country’s President Nicolas Maduro said in a letter to his Russian counterpart Vladimir Putin.Venezuela became a new non-permanent member of the UN Security Council in October 2014 and will serve to the end of 2016.

“Again I confirm our willingness to work in close coordination with your Government within the framework of the Security Council and other UN organizations to contribute to international justice and world peace, while defending the dignity of our people,” Maduro said.

The Venezuelan leader expressed confidence that Caracas and Moscow can achieve more than they have over the past 61 years of diplomatic relations.

“I hope we can meet here [in Caracas] soon. You should know that this is your home,” Maduro wrote to Putin.

Venezuela has supported Russia’s stance on many issues in international politics, including the crisis in Ukraine and in the Middle East.

1 thought on “Maduro Sends Letter to Putin: ‘Venezuela is Your Home’”