Live webcast from Frankfurt down below.

It’s not just Greece which is protesting the utter lack of reforms enabled by the ECB known as “austerity” – as of today so is Germany itself with the so-called #Blockupy movement. According to local media reports, the start of anti-austerity rallies in Frankfurt coincided with the European Central Bank opening its new headquarters, whose occupants are now besieged by tens of thousands of protesters, so perhaps #OccupyQ€ would have been more appropriate. Police said they expect around 10,000 anti-capitalist protesters, marching under the banner of leftist alliance Blockupy, to attend the rally, with a march through the city planned for later in the evening. The result is what according to a police spokesman “is one of the biggest deployments ever in the city.”

As the photos below shows, several police cars have been set on fire, with windows being smashed and demonstrators throwing stones at police ahead of the massive demonstration on Wednesday, and as riots break out across Frankfurt even as thousands of police respond with water cannon, pepper spray and mass arrests. 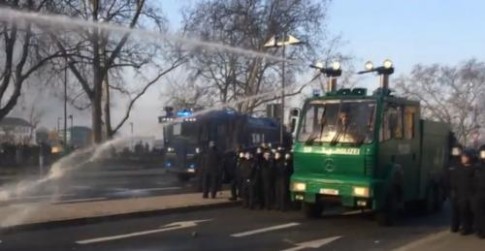 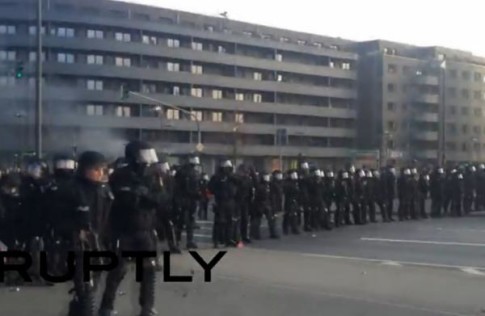 Authorities say at least one officer has been injured by a stone hurled by an activist, near the city’s opera house.

Organizers have accused the police of sparking the violence, saying they set up a “civil war type scenario” to provoke demonstrators. “This is not what Blockupy planned,” spokesman Hendrik Wester told German news agency DPA.

Video footage has shown riot police running through the city, with at least one protester being dragged away.

“The term ‘protest’ doesn’t fit in this case,” he said.

Activists are targeting the European Central Bank (ECB) as a symbol of capitalism, as well as over its part in restrictive austerity measures in financially-troubled countries such as Greece.

Meanwhile, around 100 guests, including ECB President Mario Draghi, are expected to attend the opening of the ECB’s new headquarters. 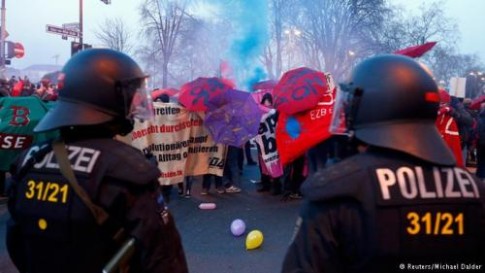 Authorities had erected a security zone around the 185-meter skyscraper, putting up barricades and barbed wire in preparation for the protest action.

A spokeswoman told news agency AFP “it is one of the biggest deployments ever in the city,” saying they expected the majority of demonstrators to be peaceful.

But they believed some violence-prone protesters could use the crowds as cover, and had placed helicopters and water cannons on standby.

A special train has been chartered by organizers to bring 800 people from Berlin, and 60 buses from 39 European countries are also heading to the financial hub.

According to Frankfurt police, seven police vehicles were set on fire, adding “there were peaceful demonstrators and there were criminals also here this morning.” The police said it deployed “upper-mid 4 figure number” of officers, but declined to comment on deployment of gas.

As for the ECB, demonstrators said they want to blockade the billion-dollar building, in an attempt to disrupt what they describe as “capitalist business as usual.”

The ECB, along with the European Commission and the International Monetary Fund, are part of the so-called “troika” monitoring countries’ compliance with the conditions of bailout loans.

These include lowering government spending and other debt-reduction methods, which have been blamed for increasing unemployment and stunting economic growth.

The ECB says it plans to remain “fully operational” despite the action, with some employees working from home. Because buying bonds only requires a computer stroke from anywhere in the world.

And here is a live webcast from Frankfurt:

1 thought on “Violent Clashes Break Out Next To New ECB Headquarters In Frankfurt As Thousands Protest Austerity: Live Webcast”