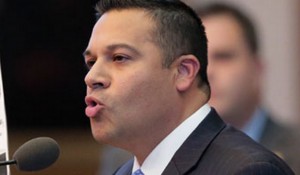 Something I hope to encourage readers of Liberty Blitzkrieg to become aware of is their civil rights. Although the situation seems to have improved in recent years, many citizens remain woefully ignorant of their individual rights. Rights that were intentionally enshrined in the U.S. Constitution specifically to prevent the emergence of tyranny.

In our ever-changing modern technological world, the application of the Bill of Rights from time to time has needed a bit of clarification from the court system. One example of such was the 2011 case of Glik v. Cunniffe, in which the U.S. Court of Appeals for the First Circuit noted that: “videotaping of public officials is an exercise of First Amendment liberties.”

Apparently, this is rubbing certain Texas police officers the wrong way, and they found a willing lapdog to push their interests in Texas State Representative, Jason Villalba.

Mr. Villalba recently introduced bill HB 2918, which bans citizens unaffiliated with government licensed mainstream media outlets from filming police within 25 feet. It doesn’t take much thought to immediately recognize that this criminalizes filming an encounter with a cop who pulls you over, or any personal interactions with officers for that matter.

Many of the most popular videos shared on this site over the years have come from random citizens recording personal encounters with police. For example:

Video of the Day – This is What Happens When You Try to Exercise Your Constitutional Rights in Illinois (100,000+ views)

Under Jason Villalba’s idiotic and authoritarian bill, it appears such recordings would become Class B misdemeanors. Breitbart covered this story comprehensively, here are a few excerpts:

Texas State Representative Jason Villalba (R-Texas) has found himself at the center of controversy after filing a bill that would make it a crime for bloggers and independent journalists — as well as regular citizens — to film police officers. Despite the backlash from free speech advocates, Villalba is insisting that his bill “does not infringe on constitutional rights” or “limit liberty in any way.”

The bill, HB 2918, adds to the definition of what constitutes “interfering” with an officer’s duties, and would make it a Class B Misdemeanor to film, record, photograph, or document the officer within 25 feet while that officer is performing his official duties. That distance is extended to 100 feet if the person is carrying  a concealed handgun. There is an exception for news media, but the current language of the bill does not include bloggers, independent journalists, or private citizens, and it is not clear whether online media outlets would be included in the exception either.

Specifically, the types of “news media” that would be exempt from the restrictions on filming police officers include only these three categories:

(A) a radio or television station that holds a license issued by the Federal Communications Commission;

(B) a newspaper that is qualified under Section 2051.044, Government Code, to publish legal notices or is a free newspaper of general circulation and that is published at least once a week and available and of interest to the general public in connection with the dissemination of news or public affairs; or

(C) a magazine that appears at a regular interval, that contains stories, articles, and essays by various writers, and that is available and of interest to the general public in connection with the dissemination of news or public affairs.

Publications such as Breitbart Texas or The Texas Tribune that are published only online could argue they should be considered “newspapers” or “magazines,” but it is far from clear. What is clear is that someone who runs an independent blog, or an internet radio station or podcast, would not be included. As newsrooms across the country have scaled back staff in recent years, independent citizen journalists have often stepped forward to fill that void, especially when it comes to covering local politics and issues of civil and constitutional rights violations that have not yet captured the attention of the mainstream media.

Villalba’s bill would also make it illegal for private citizens to record their own interactions with police officers. In fact, the language is so broad, in prohibiting “documenting” the police officer’s activities, that taking notes during a conversation with an officer, about what was being said, the officer’s badge number, etc., could be construed as a violation. Besides the fact that law enforcement agencies themselves have acknowledged the role that cameras can play in reducing both incidents and false claims of police brutality — as evidenced by the rising support for police body cameras — this bill directly contradicts established case law precedent allowing citizens to videotape police.

Breitbart Texas reached out to Villalba to get his comment regarding this bill, and spoke with him by phone Thursday evening. Villalba was adamant in his defense of HB 2918. “All we’re trying to do is get people to step back when the cops are doing their work,” he said, and “twenty five feet doesn’t seem unreasonable to me.”

“What is important to point out here is that a person without a camera, can be within the distance constraints as described in the legislation and will not be in violation of any law,” continued Syrmopoulos. “The camera, the record of police conduct is what is made illegal in this bill. To deny that it is not a direct attack on free speech is asinine.”

What’s even more interesting about this, is that parts of Texas are well known for being civil asset forfeiture capitals of the world. Recall the extremely popular post: Why You Should Never, Ever Drive Through Tenaha, Texas.

“Don’t mess with Texas.” Unless of course you are a thieving, violent cop; in which case Jason Villalba wants to make it open season on citizens by denying them their First Amendment rights.

Texas, do yourselves a favor and vote this clown out of office.

In case you need an additional reminder on why it’s so important to film police, watch this one minute video of several police officers stomping a Bridgeport, Connecticut man as he lay motionless on the ground:

The cops were recently found “not guilty.”