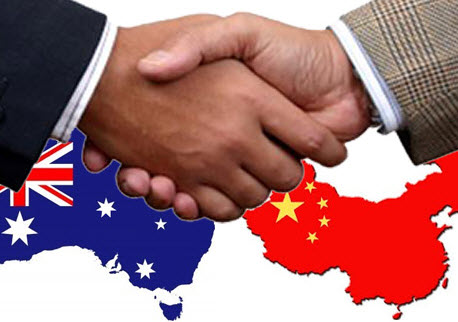 Having attacked its “closest ally” UK for “constant accomodation” with China, we suspect President Obama will be greatly displeased at yet another close-ally’s decision to partner up with the Chinese-led Asian Infrastructure Investment Bank (AIIB). As The Australian reports, “make no mistake,” the decision by Australia’s Abbott government to sign on for negotiations to join China’s regional bank, foreshadowed by Tony Abbott at the weekend, “represents a colossal defeat for the Obama administration’s incompetent, distracted, ham-fisted dip­lomacy in Asia.”

The decision by the Abbott government to sign on for negotiations to join China’s regional bank, foreshadowed by Tony Abbott at the weekend, represents another defeat for Barack Obama’s diplomacy in Asia.

The Abbott government is right to make this decision. It had well-founded concerns about the vague and unsatisfactory governance arrangements of the institution when Beijing first invited Canberra to join.

Those arrangements have ­improved since then and Australia is only signing on to negotiate terms of accession.

If the terms are no good, Australia will ultimately walk away.

Make no mistake — all this represents a colossal defeat for the Obama administration’s incompetent, distracted, ham-fisted dip­lomacy in Asia.

The Obama administration didn’t want Australia to sign up for the China-led AIIB. The Abbott government rightly feels that it owes Obama nothing.

Obama went out of his way to embarrass the Prime Minister politically on climate change with a rogue speech at the G20 summit in Brisbane.

The speech had been billed as dealing with American leadership in Asia and instead was full of ­material designed to embarrass Abbott.

Since then, the Abbott government has felt absolutely zero subjective good will for Obama.

This is an outlook shared by many American allies.

It’s important to get all the distinctions right here.

That includes full fidelity to the American ­alliance and to supporting US strategic leadership.

But the Obama administration has neither the continuous presence, nor the tactical wherewithal nor the store of goodwill or personal relationships to carry Canberra, or other allies, on non-essential matters.

The Obama administration has tried to convince both its friends and ­allies not to join the China Bank.

This was probably a bad call in itself, but, as so often with the Obama administration, it was a bad call badly implemented.

The Chinese have been the US’s best friends in Asia, diplomatically. Their territorial aggressiveness in the East and South China Seas has driven Asia to embrace America’s security role more tightly than ever.

The American military are now the best American diplomats in Asia by far.

Such prestige as the US enjoys in Asia these days rests disproportionately on the shoulders of the US military.

Obama has neglected and mistreated allies and as a result Washington has much less influence than previously.

The saga of the China Bank is almost a textbook case of the failure of Obama’s foreign policy.

As we have detailed recently, Australia is in trouble economically and its pivot to China makes perfect self-preservation sense… as Sheridan notes:

Obama treats allies shabbily and as a result he loses influence with them and then seems perpetually surprised at this outcome.

The Asian professionals in Washington regard the Obama administration as particularly ineffective in Asia.

The consensus is that the Obama White House is insular, isolated, inward-looking, focused on the President’s personal image and ineffective in foreign policy.

De-dollarization continues… As Simon Black recently concluded, now we can see words are turning into action…

Britain and Australia might be too polite to tell the US straight up– “Look, you have $18.1 trillion in official debt, you have $42 trillion in unfunded liabilities, and you’re kind of a dick. I’m dumping you.”

So instead they’re going with the “it’s not you, it’s me” approach.

But to anyone paying attention, it’s pretty obvious where this trend is going.

It won’t be long before other western nations jump on the anti-dollar bandwagon with action and not just words.

Bottom line: this isn’t theory or conjecture anymore. Every shred of objective evidence suggests that the dollar’s dominance is coming to an end.