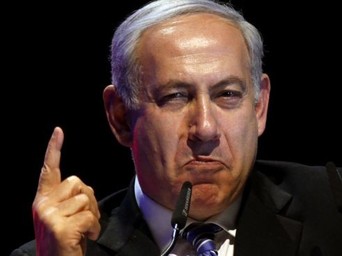 The incredibly defiant and incredibly evil Operational head of the Khazarian Mafia (KM), Bibi Netanyahu. This is the monster who ordered the 9-11-01 attack on America which killed 3,000 Americans outright with 39,000 dying from radiation caused cancers afterwards with 70,000 now fighting for their lives with radiation caused cancers. This man is evil beyond imagination and represents an the Worldwide Organized Crime Cabal known to Intel insiders as the Khazarian Mafia (KM). Numerous insiders believe that the Khazarian Mafia (KM) is inhuman, evil beyond words, and completely dedicated to destroying all societies of the World and mass murdering 90% of humans everywhere, especially Americans who they are in the process of now completely asset stripping and exporting all industry and manufacturing in order to eliminate as many jobs as possible. Unless these Parasitical Psychopathic Monsters are stopped cold, America will soon be destroyed economically, and up to 90% of all Americans will be  mass-murdered in DHS run FEMA Camps, or by their KM engineered nuclear WW3.