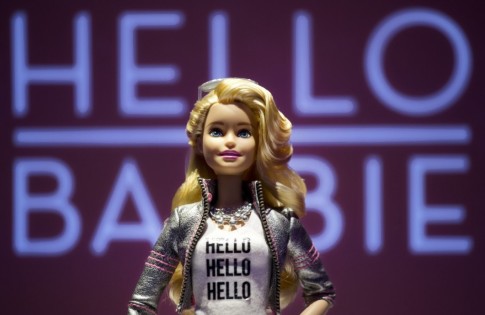 At a recent New York toy fair, a Mattel representative introduced the newest version of Barbie by saying: “Welcome to New York, Barbie.”

The doll, named Hello Barbie, responded: “I love New York! Don’t you? Tell me, what’s your favorite part about the city? The food, fashion or the sights?”

To revive the sinking sales of its flagship brand, Mattel is bringing Barbie to life with voice-recognition software that will allow the doll to “listen” to children speak and give chatty responses. It will learn over time, remembering your dog’s name and adjusting to new topics.

This WiFi-connected Barbie may soon be a hit among children used to tinkering with iPads, but children’s privacy advocates are crying foul. Hello Barbie may be more accurately called “eavesdropping” Barbie, says one advocacy group. Another popular description? Creepy.

Hello Barbie works by recording a child’s voice with an embedded microphone that is triggered by pressing a button on the doll. As the doll “listens,” audio recordings travel over the Web to a server where the snippets of speech are recognized and processed. That information is used to help form Hello Barbie’s responses.

“If I had a young child, I would be very concerned that my child’s intimate conversations with her doll were being recorded and analyzed,” Angela Campbell, faculty adviser at Georgetown University’s Center on Privacy and Technology, said in a statement.

The concern underscores a tricky challenge facing the toy industry as it struggles to keep up with children’s growing affinity for technology and Web-enabled gadgets. Sales of Barbie have plummeted recently, while demand for children’s apps and online games has exploded. Children are forging their digital footprint earlier than ever, forcing parents to make thorny decisions about what kinds of technology limits to put in place during playtime.

Mattel and ToyTalk, the San Francisco-based start-up that created the technology used in the doll, say the privacy and security of the technology have been their top priority. “Mattel is committed to safety and security, and Hello Barbie conforms to applicable government standards,” Mattel said in a statement.

The doll is expected to hit store shelves in the fall, and ToyTalk says it is still developing its privacy policy. But before the technology is activated, parents probably will have to sign into an app, create an account and consent to their children’s voices being recorded, ToyTalk says.

In an interview, ToyTalk chief executive Oren Jacob stressed that the audio files the doll collects will be used only to improve the product, including helping it build better speech recognition models for children. “The data is never used for anything to do with marketing or publicity or any of that stuff. Not at all,” Jacob said.

But the Campaign for a Commercial-Free Childhood launched a petition Wednesday calling on Mattel to scrap the doll. The technology could leave children vulnerable to stealth advertising, the group says. Children could, for example, be subtly encouraged to ask their parents for related Barbie toys or accessories, they say.

“Kids using ‘Hello Barbie’ aren’t only talking to a doll, they are talking directly to a toy conglomerate whose only interest in them is financial,” Susan Linn, the group’s director, said in a statement. “It’s creepy – and creates a host of dangers for children and families.”

The criticism of Hello Barbie comes at a difficult time for Mattel. Bryan Stockton resigned as the toymaker’s chief executive in January after a string of poor earnings results. In the fourth quarter, Mattel’s profit tumbled 59 percent. Sales of Barbie sank 21 percent, and sales of its baby-oriented Fisher-Price brand declined 16 percent.

Mattel says Hello Barbie will offer children a highly engaging play experience, in part because the doll will learn about its users over time. At the demonstration at the New York toy fair, the Mattel representative chatting with Hello Barbie mentioned that she liked being onstage. Later in the conversation, when the Mattel representative asked Hello Barbie what she should be when she grew up, the doll responded, “Well, you told me you like being onstage. So maybe a dancer? Or a politician? Or how about a dancing politician?”

Parents can choose to receive daily or weekly e-mails with access to the audio files of their children’s conversations with Hello Barbie. “We want to make sure parents are in control of their family’s data at all times,” said Jacob, ToyTalk’s chief executive.

But even that extra layer of transparency is “troubling,” Linn said.

“Children confide in their dolls,” she said. “When children have conversations with dolls and stuffed animals, they’re playing, and they reveal a lot about themselves.”