– The Recovery Is Complete: America Adds Most Waiters And Bartenders Since 2013 (ZeroHedge, March 6, 2015):

The last time the US economy was said to be about to blast off into an “above consensus” growth phase, and when everyone predicted a recovery was “just around the corner” sending the 10 Year to 3%, was the second half of 2013, right as the Fed was about to begin tapering QE3 (not because things were getting better but because it was about to run out of bonds to monetize as the TBAC warned the same summer). It was back then, and specifically August 2013, that said economy added a whopping 72 thousand waiters and bartenders according to the BLS.

We are happy to report that in February, the US economy added a recovery-validating 58,700 waiters and bartenders, the highest monthly increase in this minimum wage category in 18 months.

Surely the recovery is not only upon us, but it is time for the Fed to hike rates, because as the WSJ praised over the weekend, the “Waiter and bartender recovery” has truly arrived. Again. 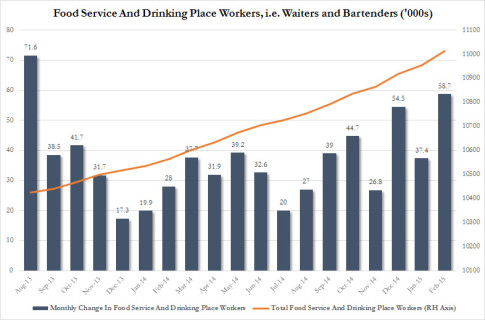 1 thought on “The Recovery Is Complete: America Adds Most Waiters And Bartenders Since 2013”