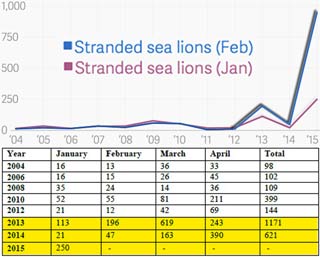 – Gov’t: It’s getting “even worse” on West Coast — Experts say over 35,000 baby sea lion could be dead, “this phenomenon unprecedented in scale” — Hundreds of times more pups than usual at rescue center — Doctor: “Definitely indicates ocean not normal… Really, we should be worried” (AUDIO) (ENENews, March 4, 2015):

NOAA, Feb 18, 2015 (pdf): We are seeing an unusually large increase of California sea lion pups stranding [that’s] intensified over the last few weeks… it is very difficult to pinpoint what is causing the increase… [There are] warmer waters than usual, but an official El Nino has not yet been declared… [We are] preparing for the worst… health trends of marine mammals [inform] us about the health of the entire ecosystem… if the stranding numbers exceed the 2013 UME [facilities will be unable to] accept more animals… animals may be left on the beach [or] humanely euthanized.

Malibu Surfside News, Mar 3, 2015: The number of animals that can be rescued and rehabilitated is very small compared to the total number of pups in distress… in 2013, Federal officials estimated that 70 percent of the total number [~35,000 out of 50,000 newborns] may have died and experts say that the numbers may be even higher this year.

Quartz, Feb 27, 2015: This phenomenon is unprecedented in scale: in January… more than twice the highest number previously recorded… February has been even worse… Jim Milbury [of NOAA said] a total of 1,200 sea lions have reached California since the beginning of the year… [It was a] much less significant event in 2013.

Malibu Times, Feb 25, 2015: The California Wildlife Center [at this] time last year… had facilitated seven rescues. As of the beginning of this week, 129 rescues have been performed… CWC is also encountering many sea lions that have washed ashore dead.

The Oregonian, Feb 26, 2015: Oceana says thousands of sea lion pups… have died on the West Coast this year…

Press Democrat, Feb 25, 2015: A crisis [of] stranded pups and older animals arriving starved and sick on coastal shores has reached the Sonoma Coast, where six animals have been recovered in recent weeks, according to the Marine Mammal Center near Sausalito. All of them — four pups and two adults — later perished because of their weakened physical state.

Shawn Johnson, director of veterinary science at The Marine Mammal Center, Feb 16, 2015 (at 3:30 in): [It’s] the third year we’ve seen an increased number of sea lion strandings… It’s definitely an indication that the sea is not its normal self… The sea lions are sentinels of the sea… it really indicates there’s a bigger issue happening in the ocean. – (at 13:00 in) At the MMC we have over 200 right now… which is incredibly abnormal. Normally this time of year we would have no sea lions pups. — (at 17:00 in) The sea lions are telling us that there’s a lack of fish. The cause of that is still being investigated… Really, we should be worried about what’s happening out there right now [it] could be directly related to… us in the future.

KQED’s half hour program on the sea lion strandings here

2 thoughts on “Gov’t: It’s getting “even worse” on West Coast — Experts say over 35,000 baby sea lion could be dead, “this phenomenon unprecedented in scale””