While the Hillary Clinton email fiasco is sure to be the talk of the town for the next few days, weeks, and months and may have seriously jeopardized the former SecState’s chances at becoming America’s next president, an even more important story is how the revelation that Hillary exclusively used a private, unencrypted and unsupervised email for 4 years of state-level, official business communications, emerged in the first place.

The answer, shockingly, comes courtesy of a Romanian hacker who was known by the handle “Guccifer”, and who is currently serving time in a Bucharest prison for his online attacks against countless public figures including the infamous leaks of George W. Bush personal paintings.

How is it possible that a Romanian convict may have helped accelerate the downfall of Warren Buffett’s presidential hopeful? According to the Smoking Gun, which first reported on this topic back in March 2013, “Guccifer” illegally accessed the AOL e-mail account of Sidney Blumenthal, who then worked as a senior White House adviser to President Bill Clinton, and later became a senior adviser to Hillary Clinton’s 2008 presidential campaign.

When “Guccifer” (who was later identified as Marcel Lazar Lehel) breached Blumenthal’s account, he discovered an assortment of correspondence sent to Hillary Clinton at the e-mail address hdr22@clintonemail.com. The “clintonemail.com” domain was registered in 2009, shortly after her nomination to become Secretary of State.

While Blumenthal, a longtime Hillary Clinton confidant, used her private e-mail to send personal messages (like a get well note after she fell at home and suffered a concussion in December 2012), he also forwarded the Cabinet member a series of “Confidential” memos about foreign policy matters.

A snapshot of one leaked email between Blumenthal and Clinton can be seen below: 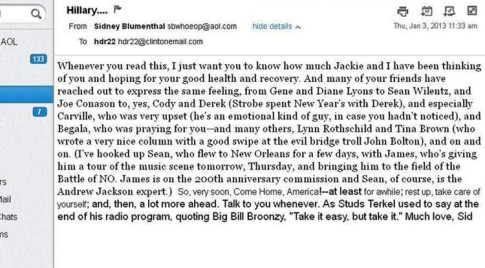 If Clinton used her own account only emails like the one above, it would be perfectly ok. It wasn’t.

Using her personal clintonemail.com address, the “For: Hillary, From: Sid” memos, provided to TSG by “Guccifer,” address a wide range of topics in global flashpoints like Algeria, Turkey, Mali, and Libya. Blumenthal also provided Clinton with information about the European Central Bank, the Georgia elections, and German Chancellor Angela Merkel.

Here is a snapshot of the inbox: 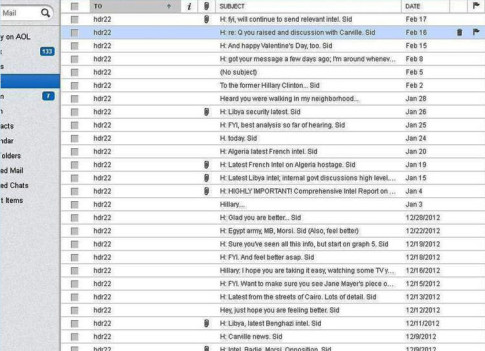 All of this happened through a personal email account, using a small Jacksonville, FL shell registrar called Perfect Privacy LLC, which is owned by web.com.

A registrar in whose possessions one can now, or could at one point in the past, find “confidential” memos such as this one from January 15, 2013 on “Libya internal government discussion,” which relied on “Sources with direct access to the Libyan National Government.”

Among the other memos to Clinton can be found titles like “Comprehensive Intel Report on Libya,” and included all-cap warnings that, “THE FOLLOWING INFORMATION COMES FROM EXTREMELY SENSITIVE SOURCES AND SHOULD BE HANDLED WITH CARE.”

Each memo included a note on the sources of intelligence included in the document. One typical memo referred to “Sources with access to the highest levels of the Muslim Brotherhood in Egypt, the leadership of the Armed Forces, and Western Intelligence, diplomatic, and security services.”

The Smoking Gun adds that the memos offer no indication as to whether the intelligence gathered by Blumenthal was done at Clinton’s suggestion. Likewise, the hacked material does not include evidence of Clinton’s response to Blumenthal’s memos (which appear to have been prepared with input from Tyler Drumheller, a former Central Intelligence Agency official who ran covert operations in Europe).

As a reminder, this is just one hacked account – one which was corresponding with Hillary Clinton – and shows just the emails that were sent or received by Sidney Blumenthal. However, it provides a broad enough glimpse of the kind of information that Hillary was trafficking in without any US government supervision or tracking.

It also means to keep a close eye on Clintonemail.com registrar status, which is the server where one can find any and all of the tens of thousands of emails that the former first lady sent and received between 2009 and 2013 in her personal account: an account which was created on January 28, 2009 and is scheduled for expiration on January 13, 2017… unless, of course, something “IRSy” were to happen to it in th emeantime, and all existing emails and backups are mysteriously lost. 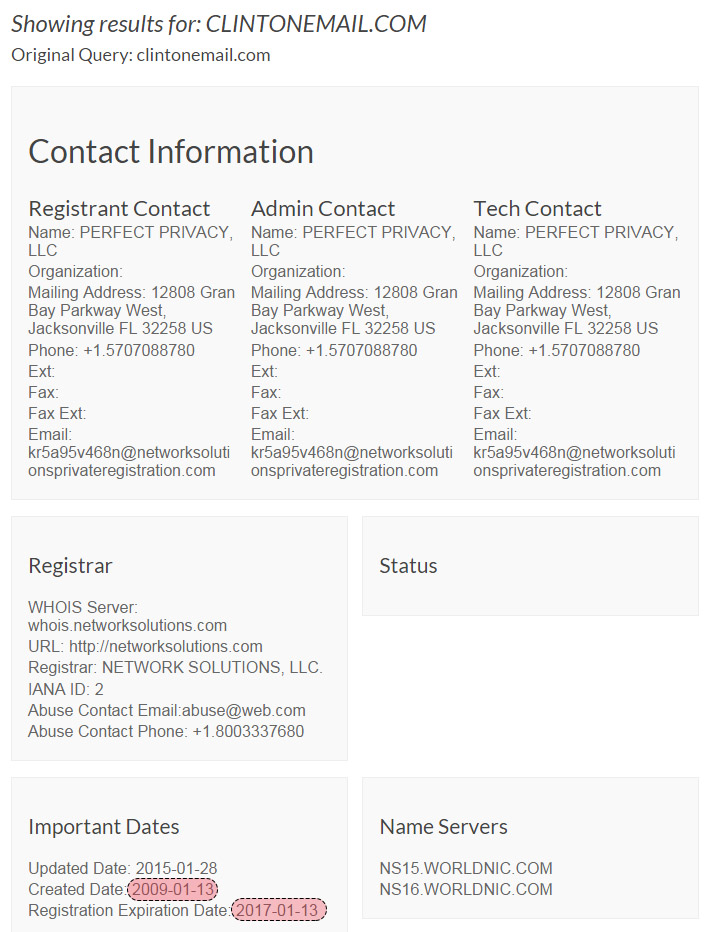 But most of all, keep a close eye on this email address: it will be topic of countless hours of discussion as America heads into the next presidential elections.

Especially since as of this moment, it appears to be disconnected.