Not “contained.” Just six short months ago, the 2Y bonds of Austria’s bank bank – HETA Asset Resolution AG – were trading well above par as the world and his mom reached for yield (~6%) in all the wrong places. Today, following the “spectacular development” over the weekend that the bank will be wound down due to the discovery of an $8.5bn “hole” in its balance sheet, the 2Y HETA bonds are trading below 50c on the dollar (at a yield of 54%). This is indeed Austria’s “Lehman” moment as for the first time in the new European ‘bail-in’ era, senior debt is getting a massive haircut.

As we noted yesterday, the punchline, is that while the world was waiting for Greece to announce capital controls, or a bail-in over the past week, it was none other than one of the Europe’s most pristeen credits (one which until recently was rated AAA/Aaa) that informed creditors a bail-in is imminent: “The finance ministry noted that creditors can be forced to contribute to the costs of winding down Heta – or “bailed in” – under new European legislation that Austria adopted this year so that taxpayers do not have to shoulder the entire burden.“

Moratorium on liabilities of Heta Asset Resolution until May 31, 2016 gives time to work out necessary haircut and reduce the risk of litigation to a minimum

Other jurisdictions that follow Austria’s example can be expected to treat resolution in this sequence: point of non-viability, independent review of assets vs liabilities, moratorium, haircut

Expect senior CDS old contract to trigger on Failure to Pay, and that HETAR govt-guaranteed sub bonds will continue paying (and trade with accrued interest)

And sure enough, the bonds have crashed… 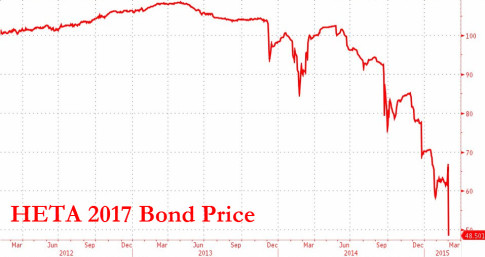 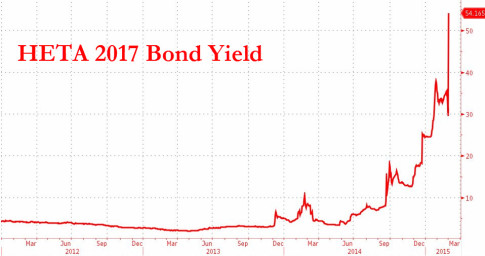 Remember – these are senior unsecured notes of a major bank! Contagion is now a big problem for Austria (and its banking system).

Of course, this being Austria, and the Creditanstalt, aka the bank which failed in 1931 under almost identical circumstances and set off the dominos that led to a global financial crisis which in turn bank fanned the flames of the Great Depression, also being Austrian, suddenly everyone is asking: “what just happened and what happens next?”

As a gentle reminder, this is what happened to Lehman… Surprise! 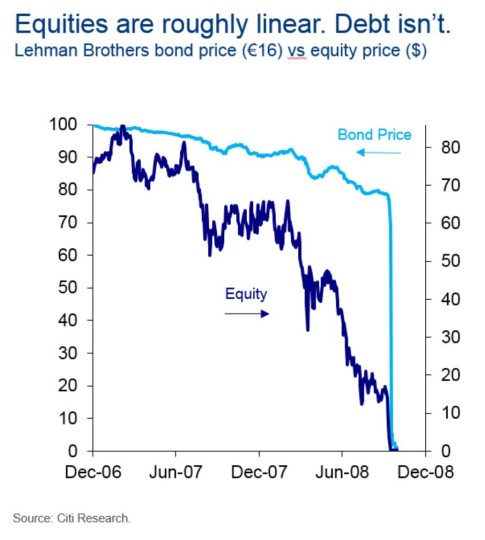 One thing is certain when one bank’s liabilities are another bank’s assets, it is that such an arrangement is simply screaming for a systemic crisis to prove to everyone just how dumb this idea was from the get go.

The question is – how long do authorities let the contagion go before they ‘change’ the rules on bail-ins and apply taxpayer funds once again – as a one-off of course – to stabilize what is, after all, a well funded and highly liquid banking system… It appears HETA gave markets a glimpse behind the curtain as the lies of the recovery come out.