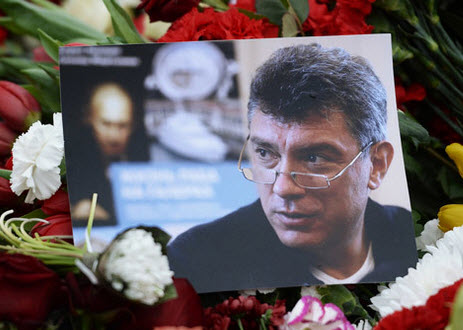 Boris Nemtsov, a veteran opposition figure in Russia, was gunned down in a drive-by attack in central Moscow on Friday night. The murder triggered worldwide condemnation and calls to bring the killers to justice.

As The Telegraph reports, President Poroshenko has stated that Nemtsov planned to reveal Russian links to the Ukraine conflict…

Iryna Baliacheva, a Russian political migrant living in Ukraine told reporters Putin was to blame for the murder.

“Putin opened Pandora’s box and released dangerous powers: non-acceptance of a different opinion (from his), representatives of the opposition were called traitors, while we (Ukrainians) are considered US Department of State agents.

“And now people who believed in Russia’s television lies may also believe that some robbers killed him, but I think that this was organised by Putin in order for him to stay in power.”

The gathering in Kiev came as Ukrainian President Petro Poroshenko, said on Saturday Russian opposition politician Boris Nemtsov was murdered because he planned to disclose evidence of Russia’s involvement in Ukraine’s separatist conflict.

Poroshenko paid tribute to Nemtsov, who was shot dead late on Friday, and said the fierce critic of President Vladimir Putin had told him a couple of weeks ago that he had proof of Russia’s role in the Ukraine crisis and would reveal it.

“Boris Nemtsov, a big friend of Ukraine and big patriot of Russia has been killed. He was like a bridge connecting Ukraine and Russia, he built the kind of relations between our countries that I would like to see,” said Poroshenko.

“To me Nemtsov is a symbol of a Russian citizen that connects (Ukraine and Russia) and sincerely respects Ukraine.”

“Boris had declared that he would provide the clear evidence of Russian Armed forces’ participation in (the war) in Ukraine.

“Somebody was afraid of this, Boris wasn’t afraid. Killers and executors were afraid.”

I am shocked and saddened to learn of the brutal murder of former Russian Deputy Prime Minister Boris Nemtsov in central Moscow. Boris Nemtsov committed his life to a more democratic, prosperous, open Russia, and to strong relationships between Russia and its neighbors and partners, including the United States. He served his country in many roles – in the federal government, in the parliament, as Governor of Nizhniy Novgorod, and as a political leader and activist. In every post, he sought to reform and open Russia, and to empower the Russian people to have a greater say in the life of their country. His absence will be deeply felt in Russia and around the world. The United States urges the Russian authorities to act expeditiously to investigate and bring to justice those responsible. Our thoughts are with the Russian people and with Mr. Nemtsov’s family and friends as we mourn his loss.

Statement by the President on the Murder of Boris Nemtsov

The United States condemns the brutal murder of Boris Nemtsov, and we call upon the Russian government to conduct a prompt, impartial, and transparent investigation into the circumstances of his murder and ensure that those responsible for this vicious killing are brought to justice.  Nemtsov was a tireless advocate for his country, seeking for his fellow Russian citizens the rights to which all people are entitled.  I admired Nemtsov’s courageous dedication to the struggle against corruption in Russia and appreciated his willingness to share his candid views with me when we met in Moscow in 2009.  We offer our sincere condolences to Boris Efimovich’s family, and to the Russian people, who have lost one of the most dedicated and eloquent defenders of their rights.

It appears – no matter who or what was responsible – we’re back at near-Cold War levels of hostility between the USA and Russia.

The Zionists are mad-as-hell with Argentina for doing business with Iran. Adding to that strong motive is de Kirchner’s refusal to pay the banksters what they feel they are “owed” on Argentina’s foreign debt; and her coziness with the Big Bad Putin and his BRICS trading bloc, which Argentina may be joining in the future.