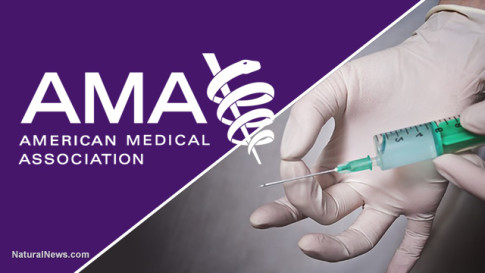 A mandatory vaccination policy — forced vaccination of unwilling recipients — is, by definition, a medical intervention carried out without the consent of the patient or the patient’s parents. This directly violates the very clear language in the Informed Consent section of the AMA Code of Medical Ethics which states:

The patient should make his or her own determination about treatment… Informed consent is a basic policy in both ethics and law that physicians must honor, unless the patient is unconscious or otherwise incapable of consenting and harm from failure to treat is imminent.

The AMA’s Code of Medical Ethics statement is very clear: “physicians must honor” the policy of informed consent. In fact, the AMA describes this as “a basic policy in both ethics and law” and only makes exception if the patient “is unconscious” or if harm from failure to treat “is imminent.”

Mandatory vaccine interventions are conducted in total violation of this code of ethics. Most unvaccinated children are in a state of perfect health, with no symptoms and no active disease. There is no “imminent” risk of harm from “failure to treat.”

Because the mainstream media is desperately trying to confuse the public about the very definition of “medical consent,” here is the Dictionary.com definition of “consent”:

verb – to permit, approve, or agree; comply or yield (often followed by to or an infinitive)
He consented to the proposal. We asked her permission, and she consented.

The AMA’s Code of Ethics statement furthermore says that patients possess a “right of self-decision” and that this right can only be effectively exercised “if the patient possesses enough information to enable an informed choice.”

Nearly all vaccinations are carried out in direct violation of this medical code of ethics because patients are almost never handed vaccine insert sheets, and the very real risks of vaccination are almost never explained to anyone. In fact, virtually the entire medical establishment operates in a state of total denial that any vaccine risks exist at all. This, too, is a striking violation of the AMA’s code of ethics.

It is also an outright abandonment of all logic and medical reality, as every medical intervention comes with some level of risk, even if that risk is small. It is not zero, as is routinely and repeatedly claimed by vaccine fanatics.

The AMA’s Code of Ethics further states “Physicians should sensitively and respectfully disclose all relevant medical information to patients.”

Instead, what we actually see in America today is:

• Arrogant doctors threatening to cut off all medical treatment from patients unless they agree to a coerced medical intervention (vaccinations).

• Doctors and hospitals calling law enforcement authorities on families, then staging the state seizure of children while threatening parents with arrest and imprisonment (medical kidnapping).

These actions are so far removed from the AMA’s Code of Ethics that they call into question the very real question of whether the entire medical system has utterly abandoned any shred of medical ethics at all.

Today, medical obedience to mandatory vaccines is being aggressively demanded by rage-filled doctors, health authorities and media outlets. A vicious campaign of intellectual bigotry has been unleashed against all vaccine skeptics, with malicious tactics such as equating skeptical thinkers who seek to avoid mercury with people who still think the Earth is flat.

There is no question that such malicious tactics against concerned moms are being conducted in total violation of the AMA’s own Code of Ethics, which also states that “The physician’s obligation is to present the medical facts accurately to the patient or to the individual responsible for the patient’s care and to make recommendations for management in accordance with good medical practice.”

This code of medical ethics means doctors may educate patients and even respectfully urge them to follow a particular course of action, but they may not coerce, threaten, intimidate or otherwise verbally berate patients who disagree with their suggested course of action.

The patient’s right of self-decision can be effectively exercised only if the patient possesses enough information to enable an informed choice. The patient should make his or her own determination about treatment. The physician’s obligation is to present the medical facts accurately to the patient or to the individual responsible for the patient’s care and to make recommendations for management in accordance with good medical practice. The physician has an ethical obligation to help the patient make choices from among the therapeutic alternatives consistent with good medical practice. Informed consent is a basic policy in both ethics and law that physicians must honor, unless the patient is unconscious or otherwise incapable of consenting and harm from failure to treat is imminent. In special circumstances, it may be appropriate to postpone disclosure of information, (see Opinion E-8.122, “Withholding Information from Patients”).

Physicians should sensitively and respectfully disclose all relevant medical information to patients. The quantity and specificity of this information should be tailored to meet the preferences and needs of individual patients. Physicians need not communicate all information at one time, but should assess the amount of information that patients are capable of receiving at a given time and present the remainder when appropriate. (I, II, V, VIII)

Because we believe the AMA will, after seeing this investigative story, attempt to alter or revoke this medical ethics document, we are also posting a screen shot of the AMA’s page sourced on February 9, 2015: 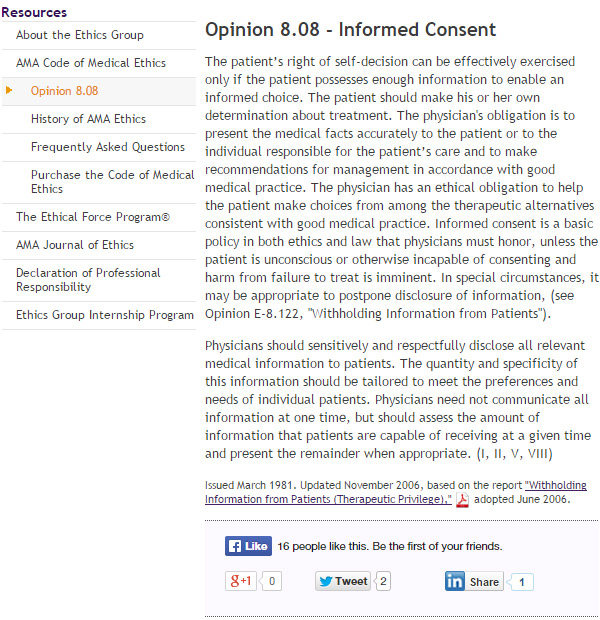 What else is fascinating about this finding is the realization that the entire mainstream media is almost fanatically screaming for the wholesale abandonment of the very principles of medical ethics endorsed by the AMA in its own words.

Almost everywhere in the media, the public is now being berated and screamed at in the name of “SCIENCE!” while vaccine skeptics are being derided as “kooks” and “nut jobs” because they have questions about vaccines that the vaccine industry refuses to answer. Those reasonable, rational questions include inquiries concerning the toxic effects of vaccine ingredients, the history of faked vaccine research, the CDC scientist’s confession of a vaccine cover-up at the CDC, the admission that many current vaccines are backed by no clinical trials, and even questions about why the National Vaccine Injury Compensation Program has already paid out billions of dollars in proven vaccine damages at the same time the medical system claims vaccines have never harmed anyone and don’t cause dangerous side effects.

All of this activity carried out in witch hunt fashion by the mainstream media and vaccine fanatics posing as “scientists” is conducted in gross violation of the AMA’s own Code of Ethics, which calls for doctors to respectfully inform patients of their choices, then allow the patient to make their own informed choice.

Six questions for the AMA

Here are six important questions for the AMA:

#1) Will you now denounce the vaccine fanatics who are calling for vaccines to be forced onto people without their consent?

#2) If not, will you revoke the AMA’s Code of Ethics and abandon what have already called a fundamental “patient right” to be informed and make their own decision about medical interventions?

#3) Will you publicly condemn doctors who are using tactics of coercion, verbal abuse, intimidation and threats against patients who have reasonable questions about vaccine safety? If not, will you publicly endorse their tactics and encourage them to be used even more frequently?

#4) If, as you state on the AMA website, “Informed consent is a basic policy in both ethics and law that physicians must honor,” then will you insist that your own AMA members follow this policy? Or is it acceptable that they almost universally violate this policy as part of a “vaccine lynch mob” mentality that has now swept across the minds of the medical profession?

#5) If the AMA does not immediately denounce the widespread vaccine violations of its own Code of Ethics, then what medical ethics does the AMA actually stand for, if any? Are there any limits to the coercion tactics doctors may use against patients to force them into medical treatments demanded by doctors?

#6) If the AMA abandons its own code of medical ethics, then how can patients trust doctors who are AMA members to act with any sense of ethics at all?

Sources for this story include:
[1] http://www.ama-assn.org/ama/pub/physician-re…