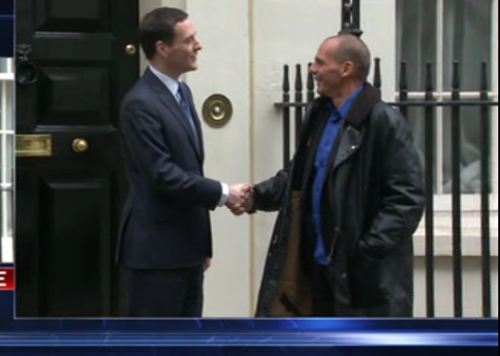 As recently as two years ago, even the merest hint that any entity was preparing for what then was unthinkable, namely the Greek exit from the Eurozone, was enough to get one burned at the stake. After all, recall what happened when none other than the head of the ECB lied on the record to Zero Hedge, saying there is no Plan B for an ex-Greece Eurozone (even if he was technically right: Europe defined it as “Plan Z”).

Now, supposedly just because the ECB started monetizing about 100% of German gross Bund issuance two weeks ago (and monetizing debt all across the Eurozone for as long as said Eurozone exists: at this rate it may not be too long) “things are different“, and no longer is it taboo to either incite bank runs in Greece (in fact it is encouraged as both the ECB, Germany and S&P have tried to do in the past week), but outright discussions about preparation for a Grexit are a daily occurrence.

The U.K. government is stepping up contingency planning to prepare for a possible Greek exit from the eurozone and the market instability such a move would create, U.K. Treasury chief George Osborne said on Sunday.

A spokeswoman for the Treasury declined comment on the details of the contingency planning.

The U.K. government has said the standoff between Greece’s new antiausterity government and the eurozone is increasing the risks to the global and U.K. economy.

“That’s why I’m going tomorrow to the G-20 [Group of 20] to encourage our partners to resolve this crisis. It’s why we’re stepping up the contingency planning here at home,” Mr. Osborne told the BBC in an interview. “We have got to make sure we don’t, at this critical time when Britain is also facing a critical choice, add to the instability abroad with instability at home.”

Then again, judging by Tsipras’ historic fire and brimstone speech in parliament, in which he just threw up all over the Eurozone ultimatum, and rejected all European demands for Syriza to concede any/all of its demands and is instead sticking to his party line and showing the world how “going all-in” is really done, the UK probably has good reason for its preparations. As of this moment it is not alone.

There are only two questions now: whether the ECB, the SNB and the BIS will be able to buy up all the Euros that will suddenly be put for sale, just to show the world how any fears of Grexit contagion are contained… if only by a central bank whose political capital, as we pointed out earlier, just ran out with what now appears to be the first Eurozone exit: an even that as recently as a year ago was absolutely unthinkable.

And question #2: what time does the Kremlin provide its own term sheet for a Greek bridge loan. Of particular interest: what currency and what interest rate.