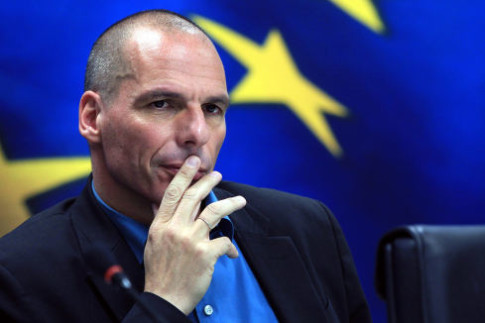 Update, and in line with the FT report, here’s Bloomberg:

So all it took for Greece to withdraw its demands was “opposition”?

Over a week after the new Greek government came to power, it has presented its first actual proposal of how it hopes to negotiate with Europe that does not involve the infamous “debt write off”, which as both Germany and the ECB have made clear, is a non-starter as it impairs the ECB’s balance sheet and leads to a loss of “faith” in the money printer, the legacy monetary system and so on. So instead of yet another debt restructuring, the FT reports that Yanis Varoufakis “would no longer call for a headline write-off of Greece’s €315bn foreign debt. Rather it would request a “menu of debt swaps” to ease the burden, including two types of new bonds.” Actually he still does, only he is not calling it as such.

Of course, the problem immediately emerges when one considers what we explained a long time ago: namely that a distressed debt exchange, such as what Greece is proposing, is what the rating agencies have always deemed an Event of Default, and thus something which the ECB will never agree with as it once again impairs an ECB-held security.

To be sure, the Greeks themselves realize that this proposal is nothing but a debt haircut under a different name, but hope that Europe will pull an Obamacare and bet on the “stupidity of their own taxpayers” to let it slide without anyone noticing. To wit: “[Varoufakis] said his proposal for a debt swap would be a form of “smart debt engineering” that would avoid the need to use a term such as a debt “haircut”, politically unacceptable in Germany and other creditor countries because it sounds to taxpayers like an outright loss. This would mean that in order for such a deal to be successful, the Troika would have to bribe Moody’s and S&P to keep their mouths shut and to “exclude” Greece from their traditional event of default definition (something which the recent DOJ “settlements” could provide assistance with).

Another aspect of the proposal is the Greek desire to link debt, or rather interest, to GDP, which begs the question: what happens if Greek GDP continues to decline – does Europe pay the Greeks a negative interest? Sarcasm aside, there are two problems with the Greek GDP-linked proposal. The first, and most important one, is that it won’t work. As Reuters explained over a year ago:

Some of the world’s leading economists have united behind the concept of bonds linked to GDP, which they say could prevent painful debt restructurings like those in Argentina and Greece.

The Bank of England last month published a paper on GDP-linked bonds, joining Yale University and the International Monetary Fund, which have also pushed the idea in recent years. “Return on these bonds varies in proportion to the country’s GDP,” the bank wrote.

But investors say the idea will never fly.

“This is an interesting academic exercise, but I believe it is unlikely that we will ever see widespread issuance of GDP-linked bonds,” said Mark Dowding, a senior portfolio manager at Bluebay, one of Europe’s largest bond funds.

In theory, GDP bonds would allow countries to manage debt-servicing costs depending on their economic cycles, in essence providing a form of recession insurance. At the same time investors could take comfort knowing that they would not be subject to a Greek bond-style haircut on their sovereign holdings.

Yet purchasers of the debt would likely demand a return high enough to nullify a sovereign’s other benefits in issuing such an instrument.

“I know investors who would buy these kind of products,” said Gabriel Sterne, an economist at distressed debt brokerage Exotix.

“But I don’t know any who would accept them unless they were compensated significantly for the uncertainty of income streams.”

And the second one is that Greece already has GDP-linked securities: warrants, as does Argentina. And in the case of the latter, it failed miserable to avoid a re-default.

Both Argentina and Greece offered GDP-linked warrants as a sweetener to encourage bondholders to take drastic writedowns on their sovereign holdings.

“It’s the equivalent of receiving equity in a corporate restructuring,” said a debt specialist at an investment manager with over US$100bn under management.

“If things really turn around, you get exposure to the performance.”

In the case of Greece, investors attributed little value to the warrants at first. But as the country’s economic outlook has improved, trading in these securities has ratcheted up. The warrants, which slumped to a low of 25 cents in the first months after Greece’s restructuring, are now worth more than five times that amount.

Furthermore, governments would be less willing to build a significant buffer of GDP-linked bonds in a good economic climate, as it would then be more expensive to service them.

And once the GDP-linked warrants became a significant part of Argentina’s debt-servicing costs, for example, investors feared the country would be unable to pay them.

Greece learnt from Argentina’s experience and capped the coupon payments on its warrants at 1% of the notional amount annually, with a call option from 2020.

Then, in addition to the “haircut that is not a haircut“, the new FinMin has proposed that the government would “maintain a primary budget surplus — after interest payments — of 1 to 1.5 per cent of gross domestic product, even if this meant Syriza, the leftwing party that dominates the ruling coalition, would not fulfil all the public spending promises on which it was elected.”

This also is confusing since the only time a nation should maintain a budget surplus is if no longer needs external funding or, if it intends to defaults as the CFR explained over a year ago.

Ironically, by promising to preserve a primary budget surplus, Greece is warning the Troika that it can default at any moment, and thus intends to preserve its bargaining leverage.

And then there is the last aspect of the Greek proposal, that the “government would target wealthy Greeks who had not paid their fair share of taxes during the nation’s six-year economic slump. “We want to prioritise going for the head of the fish, then go down to the tail,” he said.”

We wish them good luck, especially since it was not just the wealthy Greeks but everyone who decided to stop paying all taxes heading into the dramatic Syriza election. And if there is one thing taxpayers are loathe to do once they stop paying their taxes, it is to resume paying their taxes.

Still, while the proposal is surely another non-starter for Europe, what is most substantial in the FT report is that, like it or not, the Greek government has decided to play ball with Europe and is slowly but surely willing to concede to the Troika’s demands. Which means that any expectations of a sharp standoff between Greece and the ECB can now be written off, as the new Gree finmin has just made it clear that despite the bluster and rhetoric, he will ultimately accept whatever terms Europe offers him.

Perhaps most ironic, while Greece has proposed a debt haircut in all but name, what it now seems almost assured to end up with is a continuation of the current status quo. In all but name.

2 thoughts on “Greece Changes Strategy: No Longer Demands Debt Write Off, Ask For Debt Exchange Instead”