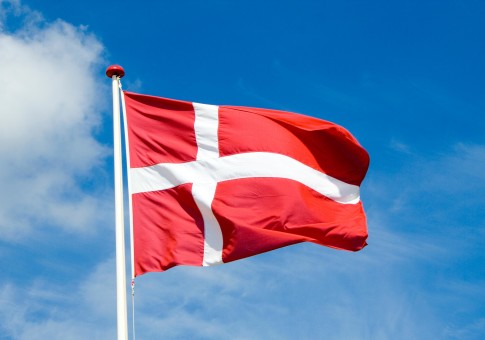 While much has been said about last week’s third in two weeks rate cut by the Danish Central Bank, one which brought the deposit rate to -0.50%, having previously cut it to -0.35% and -0.2% in the aftermath of the ECB Q€ and the SNB’s abandoning of the Franc ceiling – the latest move of desperation to preserve the peg of the DKK to the plunging Euro and one which as reported previously has led to such strange financial abominations as negative interest rate mortgages – few noticed an even more important announcement by the Denmarks Nationalbank. On Friday the Danish central bank said it would halt all government bond issuance “until further notice”!

Upon the recommendation of Danmarks Nationalbank, the Ministry of Finance has decided to suspend the issuance of domestic and foreign bonds until further notice.

Danmarks Nationalbank has purchased foreign exchange in the market and reduced the monetary-policy interest rates. This has resulted in a widening of the negative spread between money market rates in Denmark and the euro area. The interest rate spreads for government bonds, however, have remained positive in the longer maturity segments.

Danmarks Nationalbank expects that stopping the issuance of government bonds will contribute to reducing the interest-rate spreads in the longer maturity segments and thereby limit the inflow of foreign exchange.

What Denmark just did, in addition to going further into NIRP, is to try and halt the appreciation of its currency by preventing more inflows not only on the short end but across the Treasury curve, and by halting supply of government bonds – the government had been due to issue 75 billion Danish crowns ($11 billion) worth of domestic debt to cover its 2015 financing needs – it hopes to not only lower long-end rates further, but to further weaken the Danish Krone, whose recent strength as a result of offshore inflows is the chief reason why many are increasingly saying the DEK peg to the EUR is in jeopardy.

And stated even simpler, paraphrasing Jan Storup Nielsen of Nordea, what Denmark has done is “back-door QE”, because as some forget, there are two ways to push the price of an asset higher (thus pushing its yield lower in the case of a bond): increase demand, which is what conventional QE does when central banks buy bonds, or reduce supply. Which is what Denmark just did by completely cutting off all Treasury issuance “until further notice“.

“We had not expected this,” said Jes Asmussen, Chief Economist at Handelsbanken. “Everything that happens now is surprising. We had expected the central bank to start to use other instruments if the pressure on the crown continued, but we did not consider it would be this exactly.”

But why, when with every passing day it is becoming clearer that the facade of central bank omnipotence is falling away, and central banks will, out of sheer desperation, do anything to delay the moments which as at least the SNB has admitted, is now inevitable?

Some more from Reuters:

While unexpected and unconventional, the Danish move underscores a commitment to its decades-long fixed currency policy and is aimed at weakening the crown to keep it within a tight range to the euro.

Pressure had been building on the crown since the Swiss National Bank abandoned its cap on Jan. 15, letting the franc surge against the euro, and the European Central Bank adopted a bond-buying scheme that helped weaken the euro more broadly.

“They have been successful with pushing the short rates down but not the longer rates and that has been the catalyst for continued inflow into the Danish asset market,” Kamal Sharma, G10 FX Strategy Director at Bank of America Merrill Lynch, told Reuters.

“They are obviously looking at the full extent of the policy tool kit.”

They sure are, and the central bank “now hopes that removing the option of buying new Danish government bonds will reduce demand for the crown while pushing investors towards existing longer-dated bonds, which would lower borrowing costs more broadly.”

That’s great, there is only one problem: what was until recently a “central bank put” has now become a “global speculator call” option. Why? Because the as the SNB just showed, there are very specific and defined limits to what banks with non-reserve currencies can do to defend their monetary policy.  As a result, the Danmarks Nationalbank can thank its Swiss peers for not only crushing any hopes it may have of defending its currency peg, but essentially assuring that it will suffer massive losses on any and all strategies it implements to avoid a fate similar to that of the Swiss.

Which means one thing: in the aftermath of the EURCHF devastation, where virtually unilimited stops were triggered under 1.20 sending the pair some 30% lower in milliseconds as HFTs and other traders were carried out feet first, increasingly more speculators are betting that the “Trade of 2015“ could be doing precisely the opposite of what the Danish central bank is hoping will happen: i.e., shorting the EURDKK (or going long the DKKEUR) in hopes that when the Danish peg finally does break, it too will result in long Swiss France-type profits. 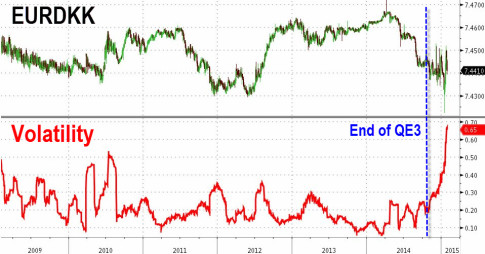 Of course, those who bet against the Danish Central Bank also get the benefit of being hedged against further European risk implosion, because should the Greek situation deteriorate even more resulting in inflows into safe-haven currencies such as the CHF and DKK (now that Draghi will do everything in his power to crush the Euro), then the cost of defending the Danish peg will become insurmountable and Denmark will, like Switzerland, have no choice but to give all those who are now on the other side of the trade the profit that will make many speculators’ year in the blink of an eye.

They say “don’t fight the Fed”, and in this case – at least until Janet Yellen capitulates on the Fed’s stubborn insistence of pushing the USD every higher – this means explicitly to keep fighting the Danish Central Bank until its peg finally breaks.