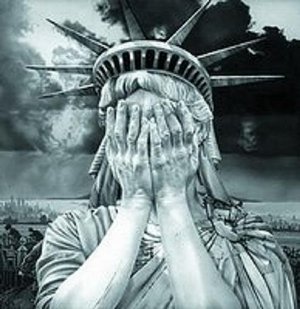 The more detached from reality American culture becomes the more strictly ceremonial leadership gets, as illustrated by the raft of bromides Barack Obama floated past the assembled vassalage of government last week in another grand effort to avoid the necessities of the moment.

Those necessities include freeing a hostage public from the tyrannical clutches of corporate despotism — the evil empire of big boxes, big burgers, big pharma, Big Brother — and the atrocious rackets fostered by them that masquerade as an economy. The template of the life we have known is broken and the pieces within are flying apart, and no amount of wishing or promising can keep them going. If this society is even going to survive, the people have to smash their way out of this template prison, probably against the efforts of the people and organizations now running it merely for their own benefit.

The future is telling us very clearly: get smaller, get finer, get more local, get less complex, get less grandiose, do it now.

Do you want to eat food in the years ahead? Better make sure you live in a part of the country where small-scale farming and backyard gardening is possible because the General Mills Agri-Biz GMO Cheerios model will be folding its big tent along with its financing agents in the debt Ponzi banking system.

Do you want to have a personal economic future? Think about what you can do to make yourself useful in a local economy made up of your neighbors. And if you live in one of the thousands of soulless, neighborless suburban wastelands that amount to nothing but big box and big burger plantations, you better get out and find a real town in some other part of the country.

Do you believe that computers and robot factories will define the years to come? Maybe you have failed to notice that the US electric grid is decrepit and in need of at least a $1 trillion upgrade-and-rebuild, which, by the way, is not going to happen. What is all that crap going to run on? America’s disappointment with the broken promises of technology will be so epic that we’ll be lucky not to slide back into a world ruled by superstition and ghosts.

Do you think that $50 oil is going to make the world safe for WalMart, Walt Disney World, and Happy Motoring? In fact, $50 oil is going to crush what is left of the US Oil industry, especially fracking for shale oil and deep water drilling. And guess what — everything else is depleting at about 5 percent a year. The frackers will never again get access to the sort of junk bond financing that allowed them to ramp up their Ponzi demonstration projects in the Bakken and Eagle Ford. And they will never again regain their current level of production — which is the net result of past Ponzi financing, now ending in tears. So, forget “Saudi America” and “energy independence,” unless you mean living in a walkable community near a navigable waterway.

Do you want to be an educated person, that is, someone capable of comprehending reality and functioning within its demands? In the USA, that means you must learn how to speak and write English correctly, especially if you are in a “low performing” ethnic minority group. If you can’t conjugate verbs, you will have a hard time distinguishing the past, the present, and the future in your daily activities. Among other things, you’ll be incapable of showing up on time. And that, of course, is only the beginning. It’s that simple. These abilities used to be the result of an eighth-grade education in the United States. We would be lucky to get back to that high standard, and our knucklehead fantasies about universal access to community college be damned. It’s only a new layer in the current racket that pretends to be education.

That is the current state of the union and a glimpse of the trajectory it’s on, which the inept leaders of our country do not comprehend and cannot communicate.

1 thought on “The Template Of Life In America Has Broken”