Obama is NOT ‘blurting out’ any ‘meaningless phrases’ in his speeches. They all serve a purpose:

– President Obama’s Commencement Speech Exposed For What It Is: Latest State Of The Art MASS HYPNOSIS, Using The Techniques Of Dr. Milton Erickson, M.D.

The middle class has shrunk consistently over the past half-century. Until 2000, the reason was primarily because more Americans moved up the income ladder. But since then, the reason has shifted: There is a greater share of households on the lower rungs of the economic ladder.

– From yesterday’s New York Times article: Middle Class Shrinks Further as More Fall Out Instead of Climbing Up

At a packed session in Davos, former hedge fund director Robert Johnson revealed that worried hedge fund managers were already planning their escapes. “I know hedge fund managers all over the world who are buying airstrips and farms in places like New Zealand because they think they need a getaway,” he said.

– From the Guardian’s article: As Inequality Soars, the Nervous Super Rich are Already Planning Their Escapes

So the other day, President Barack Obama once again demonstrated his contempt for the American public by using his State of the Union address to pejoratively blurt out meaningless phrases such as “but tonight, we turn the page” and: “The verdict is clear. Middle-class economics works. Expanding opportunity works. And these policies will continue to work, as long as politics don’t get in the way.”

Sorry, but why are “we turning the page” tonight? Weren’t you elected over six years ago? Why didn’t you turn the page in 2009?

Meanwhile, I’m astounded by the phrase “middle-class economics works.” Perhaps it does, but how would anyone know? The only thing I’ve seen from his administration is a laser focused determination to consolidate all American wealth and power into the hands of a tiny group of oligarchs and their lapdogs.

Indeed, the following articles published in the last two days by the New York Times and the Guardian show the true results of Obama’s oligarch-coddling legacy. The Obama years have been nothing short of an oligarch crime scene.

First, from the New York Times:

The middle class that President Obama identified in his State of the Union speech last week as the foundation of the American economy has been shrinking for almost half a century.

In the late 1960s, more than half of the households in the United States were squarely in the middle, earning, in today’s dollars, $35,000 to $100,000 a year. Few people noticed or cared as the size of that group began to fall, because the shift was primarily caused by more Americans climbing the economic ladder into upper-income brackets.

But since 2000, the middle-class share of households has continued to narrow, the main reason being that more people have fallen to the bottom. At the same time, fewer of those in this group fit the traditional image of a married couple with children at home, a gap increasingly filled by the elderly.

Remember, middle-class economics works. If the goal is its total destruction.

These charts from the New York Times do not tell the tale of a thriving economy: 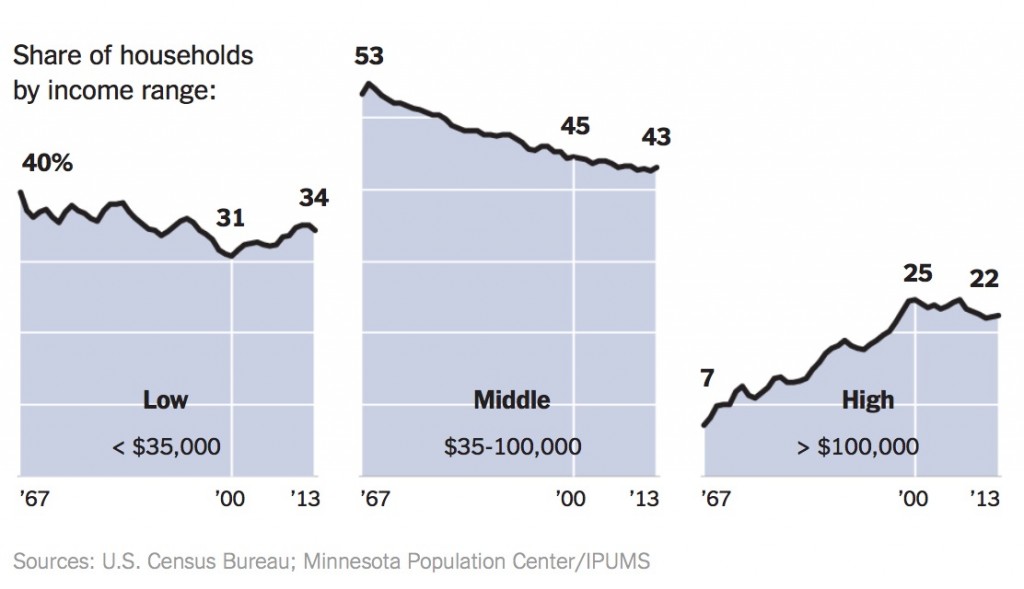 Even as the American middle class has shrunk, it has gone through a transformation. The 53 million households that remain in the middle class — about 43 percent of all households — look considerably different from their middle-class predecessors of a previous generation, according to a New York Times analysis of census data.

In recent years, the fastest-growing component of the new middle class has been households headed by people 65 and older. Today’s seniors have better retirement benefits than previous generations. Also, older Americans are increasingly working past traditional retirement age. More than eight million, or 19 percent, were in the labor force in 2013, nearly twice as many as in 2000.

According to a New York Times poll in December, 60 percent of people who call themselves middle class think that if they work hard they will get rich. But the evidence suggests that goal is increasingly out of reach. When middle class people look up, they see the rich getting richer while they spin their wheels.

One of the main reasons we have seen such a low level of resistance to this historic oligarch theft, is due to the successful brainwashing of the American public. Despite clear evidence to the contrary, 60% of what is left of the middle-class still think they are going to get rich. They have no idea that they are really just a bunch of deluded plebs unable to see how systematically and catestrophically they are being played.

Meanwhile, the Guardian describes how many global oligarchs are already planning their escape. These people know full well they are being enriched criminally. Their response is to take as much money as possible and flee before the pitchforks emerge (see: The Pitchforks are Coming…– A Dire Warning from a Member of the 0.01%).

With growing inequality and the civil unrest from Ferguson and the Occupy protests fresh in people’s mind, the world’s super rich are already preparing for the consequences. At a packed session in Davos, former hedge fund director Robert Johnson revealed that worried hedge fund managers were already planning their escapes. “I know hedge fund managers all over the world who are buying airstrips and farms in places like New Zealand because they think they need a getaway,” he said.

But as former New Zealand prime minister and now UN development head Helen Clark explained, rather than being a game changer, recent examples suggest the Ferguson movement may soon be forgotten. “We saw Occupy flare up and then fade like many others like it,” Clark said. “The problem movements like these have is stickability. The challenge is for them to build structures that are ongoing; to sustain these new voices.”

Clarke said: “Solutions are there. What’s been lacking is political will. Politicians do not respond to those who don’t have a voice In the end this is all about redistributing income and power.”

She added: “Seventy five percent of people in developing countries live in places that are less equal than they were in 1990.”

Welcome to the recovery suckers.