The Keynesian revival that is currently underway in the backrooms and hallways of assorted world governments is being somewhat replicated in Europe this week. It is all predicated on the position that all previous forms of “stimulus” from the fiscal side were not the right size, composition or color for that matter and thus the lack of recovery can be attributed to the impurity of the Keynesian solutions. That is further augmented in especially the Krugman view of “austerity” which has supposedly undercut all the good deeds done by central banks.

Thursday’s press conference with Mario Draghi announcing the QE program ran dangerously into interfering with that Krugman view, while also keeping within the spirit of the “purity” argument. Toward the end of the question and answer session, the ECB’s chief was asked about hyperinflation, as if this latest balance sheet expansion might nudge Europe closer to Weimar.

The second question, I think the best way to answer to this is, have we seen lots of inflation since QE programmes started? Have we seen that? And now it’s been quite a few years since they started. Our experience since we have these press conferences goes back to a little more than three years. In these three years we’ve lowered interest rates I don’t know how many times, four or five times, six times maybe. And each time someone was saying this is going to be terribly expansionary, there will be inflation. Some people voted against lower interest rates way back at the end of November 2013. We did OMT. We did the LTROs. We did TLTROs. And somehow this runaway inflation hasn’t come yet.

While you might give him credit for his weasel word of “runaway” in the last sentence I quoted, the entire thought is very, very close to an admission not just that “runaway” inflation never came but nothing else did either. Maybe it was a slip, but it’s not like the ECB’s governing council is not aware of the scorecard, especially as Europe has already seen its first negative inflation rate since 2009. 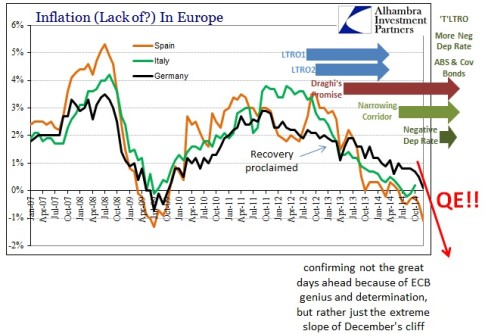 But the setup is the same as the Keynesians are using, taking a page out of the justifications Communists have been disingenuously suggesting since almost 1917.

We have been living in the age of Keynesianism reborn from crisis (which his theory contributed mightily toward), but now we are being told that though it may have been some Keynes it was not enough Keynes. Apparently, like QQE purchases of Japanese government bonds, there is a magic and sadly secret formula which in the exact right formulation delivers enchanted economic properties. For some reason, like every monetary point, central banks and governments keep falling short in their mixtures as the answer to all our problems is always more and more of it.

To hear Draghi answer that question you almost get an audible sense of frustration on his part, maybe even well beyond what he considers to be the idiotic assumption of hyperinflation (as if that would ever happen under his leadership). I think that plus what he actually says reveals exactly this idea, in that the ECB has been “restrained” in its approach up to this point and none of it has done much of anything good (apart from massive stock and bond imbalances, the very pre-requisites for hyperinflation along with a healthy dose of “deflation”). That lack of efficacy is thus due to the “impurity” of the ECB’s practicing monetarism to this point.

The inevitable failure has simply freed the ECB to do what its most ardent debasers have wanted to do all along, which is why Draghi is almost openly contemptible toward his own handywork – to prove he had not failed, but rather that those holding him back were wrong, wrong and wrong. There will be no more impurities in moving forward, and the ECB is confident that this “open-ended” commitment (don’t ask the Fed about that) will go where previous forms did not.

The funny part of this, blinded perhaps by his monetary theology, is that Draghi doesn’t see any increased danger in “runaway” inflation from QE as exactly the same as in all prior monetary outbursts. What will his reaction be when just plain “inflation” does as well? There is indeed a commonality among all these programs, all questions of theoretical purity aside:

If so many Keynesian gods would stop trying to manage and start trying see their own god-like tasking as menacing there would be less depression and such widespread failure. An asset bubble is no more an act of God as an act of perfectly captured humanism branded as “experts” on playing God. These are the same people that thought it not only possible but a duty to “fill in troughs without shaving off peaks” sitting around now trying to develop new theories as to why, suddenly, God shaved off the peaks.

As it is, recriminations have already begun, as the lack of expected enthusiasm for the QE in its present form has led to whispers, rumors and calls for it to be already expanded before its actual launch in March. Someday, maybe, these central banks will find that secret formula that unlocks the commanded utopia from its monetary prison, but I think it more like what led to the end of the first Gulf War, where continued air raids upon Iraqi positions amounted to destroying rubble. As Colin Powell put it, “we were bouncing rubble with billion-dollar missiles.”

That seems to be a fitting, paraphrased description of the European state of monetarism, bouncing economic rubble with trillion-euro debt missiles.