Worried about the honesty of your drug mule? Concerned that your smugglers will demand higher and higher minimum wage? There’s a drone for that. Once again technology has enabled ‘progress’ as AP reports police in a Mexican border city said Wednesday that a drone overloaded with illicit methamphetamine crashed into a supermarket parking lot. As AVWeb notes, drones carrying illegal drugs and contraband have been among the creative ideas used by smugglers, and crashes do happen from loss of control or perhaps weight-and-balance problems. Brings a whole new meaning to ‘Breaking Bad’. 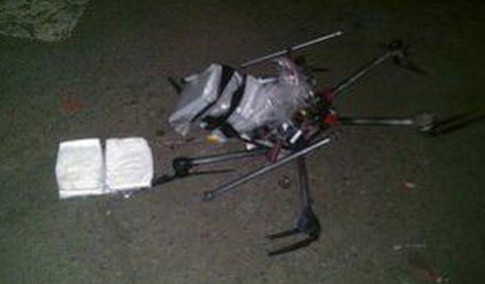 Police in a Mexican border city said Wednesday that a drone overloaded with illicit methamphetamine crashed into a supermarket parking lot.

Six packets of the drug, weighing more than six pounds, were taped to the six-propeller remote-controlled aircraft, authorities said.

Morrua said authorities are investigating where the flight originated and who was controlling it. He said it was not the first time they had seen drones used for smuggling drugs across the border.

Other innovative efforts have included catapults, ultralight aircraft and tunnels.

As AVWeb adds, The AP also reported this week a man was sentenced to 15 years in prison for attempting to fly a drone laden with cell phones, tobacco and marijuana into a maximum-security prison in South Carolina in 2014.

The drone crashed in the bushes outside a 12-foot razor wire fence at Lee Correctional Institution in Bishopville.

It was the first known attempt to fly a drone with contraband into that state’s prisons, but the idea isn’t new, the AP reported.

In 2013, four people in Georgia were accused of using a drone to fly tobacco and cellphones into a state prison there.

More robots replacing humans? Where is a drug mule supposed to earn a fair wage?