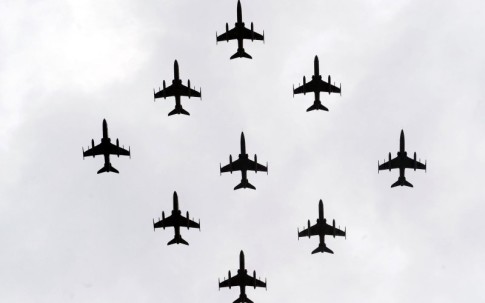 Due to budget cuts and investments in ultra-expensive gear, the Air Force was forced to disband one of its three so-called Aggressor squadrons that fly frontline jets like the Boeing F-15C Eagle and Lockheed Martin F-16 Fighting Falcon that are painted in enemy colors and use enemy tactics.

The reason for the new initiative? Pure desperation, say more than a half-dozen senior Air Force officials. “The red air situation is a mess,” one senior Air Force told The Daily Beast. “There are Band-Aid fixes being applied to areas around the community, but it’s not enough.”

It’s a sign of the system-wide stress the Air Force is now under. Thirteen years of war, combined with unwise investments in underperforming stealth jets, has put the service in a bind. There just aren’t enough planes—or pilots—on hand to fulfill the Air Force’s many missions. “Demand for our services is way, way up. But we are meeting those demands today with the smallest Air Force in our history,” Air Force Secretary Deborah Lee James told reporters Jan. 15. “And when you couple that smaller force against the backdrop of austere budgets, and with the huge demand, what we have is we have a total force that is under significant strain.”

As for outsourcing red air, not everyone is sold on the move—but most agree the Air Force has little choice. “The short answer is that contractor-provided red air is overpriced and underwhelming, but at the end of the day there isn’t much choice in utilizing it,” another senior Air Force official told The Daily Beast.

The Air Force is soliciting pricing information for how much it would cost for contractors to fly 180 training sorties over a two-week period later this year.

“Although this is a one-time trial, there is potential for this trial to grow into multiple requests per year or an annual contract for X number of weeks of support throughout the year,” reads an Air Force document posted on the government’s Federal Business Opportunities website.

The contractors would have to fly supersonic “fourth generation” fighters similar to the F-15, F-16 or the Navy’s F/A-18 Hornet according to the Dec. 22, 2014, notice.

The jets available for “adversary air support training” would have to be “capable of Mach 1.0+ and equipped with: Radar, Radar Warning Receivers (RWR), and Electronic Attack” systems, according to the posting.

“Now, we have so few fourth gen fighters left and they’re just crushed again… Iraq, Syria, and Afghanistan. If you want to be realistic, we need to be equally matched or preferably out-numbered. We don’t have the inventory to do that.”

This need for outsourced enemies is the direct result of the wars in the greater Middle East. Since the start of the wars in Iraq and Afghanistan, the Air Force has cut its existing fighter force of “fourth generation” F-15s and F-16 to pay for super pricey hardware like the “fifth-generation” F-22 and F-35 Joint Strike Fighter.

“After we brought [the] F-22 on line, and subsequently started cutting Aggressors, we met the intersection of high ops tempo in Afghanistan and Iraq,” explained one senior Air Force official. “At this intersection we found lots of fifth-gen [specifically the F-22 Raptor] fighters doing nothing but airshows and all the fourth gen fighters [like the F-15E and F-16] were dropping bombs in Afghanistan and Iraq.”

But even as the Air Force’s older aircraft flew combat missions overseas, the service started to cut the fleet to pay for its other priorities. “Now, we have so few fourth gen fighters left and they’re just crushed again… Iraq, Syria, and Afghanistan,” the senior official complained. “Fifth-gen, and most fourth-gen fighters need to train in the air-to-air role. And if you want to be realistic, we need to be equally matched or preferably outnumbered. We don’t have the inventory to do that.”

While the U.S. Navy has previously embraced contractors providing some training support for air combat training, the Air Force has been very reluctant to let pilots-for-hire fly privately owned-combat aircraft for training purposes.

“I don’t know about [their] ability to replicate [enemy threat aircraft],” said one former senior Air Force fighter pilot with extensive experience with enemy fighters. “The bottom line issue on previous initiatives of this sort is the question of who will fly the jets. Historically, the Air Force has wanted Air Force pilots. Contractors have held out for their stable of civilian—albeit probably military vets—pilots. [An] impasse has resulted.”

Moreover, there are many Air Force officials who question if private military companies have the ability to realistically simulate the most likely of enemy fighters, like the Russian Sukhoi Su-30 or Mikoyan MiG-29. Most of the existing private military companies are flying older jets that have long since been retired from active service. “It’s 1970s technology trying to replicate a fourth-gen red air fighter,” one Air Force official said.

A third outfit—Florida-based Draken International, which boasts a fleet of more than 50 jets—actually succeeded in importing some 27 Russian-built MiG-21 fighters to use for training purposes. In addition to the MiGs, the company operates some 11 Douglas A-4K Skyhawk attack aircraft—but those aircraft are upgraded with electronics including a radar from upgraded European-operated versions of the F-16 fighter jet. Draken’s fleet also includes nine Italian-built Aermacchi MB-339CB advanced trainers, 28 Czech-built Aero Vodochody L-159E light combat jets, and five L-39s.

That sounds impressive, but private companies don’t have the equipment to train the Air Force’s squadrons—nor does the service have the money to pay the contractor’s fees. “They are really expensive though and you have to pay for them with operations and maintenance money, which, is the first thing people lose in budget cuts,” a senior Air Force fighter pilot told The Daily Beast.

Another official questioned whether the contractors were really up to the task.

“In general they can’t replicate more than a piece of metal and perhaps carry an EA [electronic attack radar jamming] pod,” one senior Air Force official told The Daily Beast. “If we could afford more, then we wouldn’t be getting rid of the [F-15C] Eagle aggressors.”

Moreover, as more advanced so-called fifth-generation fighters like the F-22 Raptor and the F-35 Joint Strike Fighter enter service in numbers, the Air Force will need more challenging opponents to train against.

“You’ll see, in about three years, folks will be screaming for fifth-gen adversaries. Where will we get those? Certainly not from contract air,” one senior Air Force official complained. “We’ll soon be back to each unit supplying its own red air. The big [adversary] air push is 90 percent pork and 10 percent need.”

However, another senior Air Force official disagreed. The private military companies can provide additional jets and trained pilots that jets like the F-22 and F-35 can beat up on without wasting time taking turns to act as an enemy aircraft. “We’ve proven that fifth-gen red air in the form of F-22s is not good, as it’s hard to ‘dumb down’ a Raptor,” another senior Air Force official said. “The problem is even worse with the F-35.”

More than anything, the new stealth jets just need something or someone to shoot at. “One of the biggest things we look for in fifth-gen support is superior numbers of adversary aircraft,” the official said.

This official argued that contactors—even with their relatively primitive aircraft—are good enough for now until enemy countries buy better fighters. Pilots could use simulators for the most dangerous scenarios where there are powerful Russian or Chinese-built air defenses are present. “Replication of advanced threats can be done well in simulators,” the Air Force official said. As other countries acquire more advanced capabilities, we may need to acquire more advanced aircraft to replicate them, but until then contract air to present our fifth-gen pilots with an outnumbered picture to deal with is good.”

One senior Air Force official expressed his deep scepticism. “Look, I like the sims, they are good. High fidelity, you can replicate the biggest fights that you can’t in the air. But ultimately, you fly differently in the sim because you don’t fear death,” the official said. “No matter how much we sim, you can’t simulate that sinking feeling when it’s pitch black and you’re trying to get to the tanker in the weather before you push into enemy territory.  I’ve done that… it’s tough. Being cool and calm under those circumstances comes from proficiency and real experience, not simulated ones.”

Ultimately, the official said, it’s unlikely that Air Force will not be able to afford the contractors’ fees. “I suspect we’ll continue to limp along, use simulators and talk about how great they are, and fight T-38s,” the official added. “I doubt we will use these guys. They expensive and we don’t have the cash.”