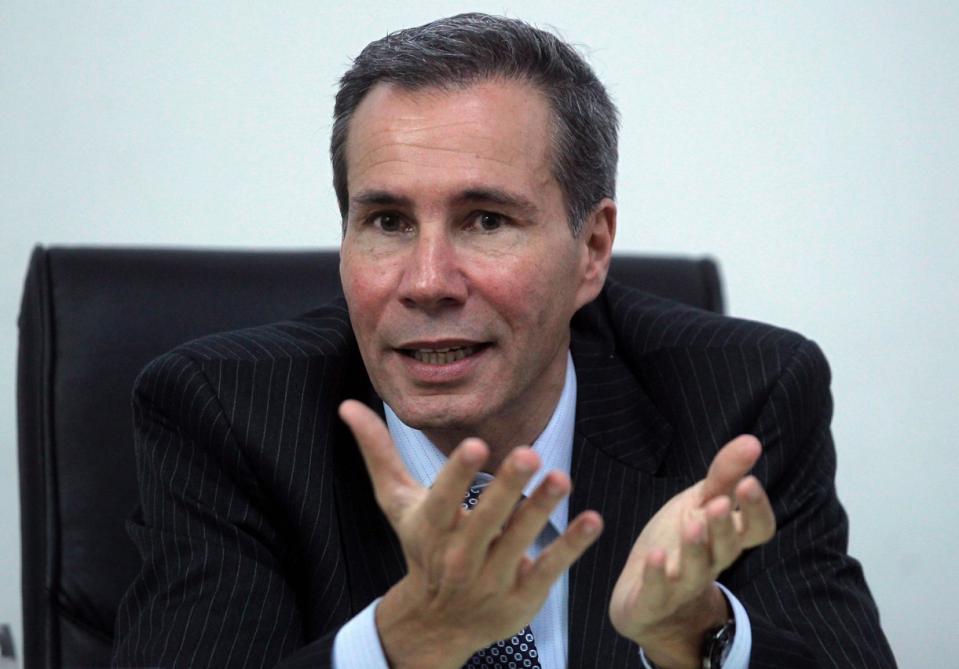 The Argentine prosecutor who accused President Cristina Fernandez of orchestrating a cover-up in the investigation of Iran over the 1994 bombing of a Jewish community center has, according to AP, been found dead in his apartment, authorities said on Monday. As The Times of Israel reports, Alberto Nisman, 51, was discovered, by his mother, in a pool of blood in the bathroom on Sunday night with a gunshot wound to the head, hours before he was set to testify before lawmakers on his accusations of the cover-up. Coincidence we are sure, but police are investigating and Argentinian media reported that they had initially ruled the death a likely suicide but we note that The Clarin daily reported just a few days earlier that Nisman had told the newspaper, “I could end up dead because of this,” and in a separate TV interview, had also been considering increasing his security detail.

The Argentine prosecutor who accused President Cristina Fernandez of orchestrating a cover-up in the investigation of Iran over the 1994 bombing of a Jewish community center has been found dead in his apartment, authorities said on Monday.

Alberto Nisman, who had been delving into the blast at the AMIA Jewish community center in Buenos Aires that killed 85 people, said last Wednesday Fernandez had opened a secret back channel to a group of Iranians suspected of planting the bomb.

He had said the scheme intended to clear the suspects so Argentina could start swapping grains for much-needed oil from Iran, which denies any connection with the bombing.

“Alberto Nisman was found dead on Sunday night in his flat on the 13th floor of the tower Le Parc, in the Buenos Aires district of Puerto Madero,” the Argentine Security Ministry said in a statement.

The ministry said Nisman’s security guards had alerted his mother on Sunday afternoon that he was not answering his front door or phone, and the Sunday papers were still on his doorstep.

Nisman’s mother found the door to his apartment locked from the inside and got a locksmith to open it. She found her son’s body on the floor of the bathroom, and called the police.

“Next to Nisman’s body … a 22-calibre handgun was found, together with a bullet casing,” the ministry statement said.

Nisman, who local media said was 51, had been due to take part in a closed-door hearing in parliament on Monday to explain his accusations against Fernandez.

As The Times of Israel explains, Nisman had filed a 300-page complaint naming Fernández, Timerman and others of seeking to “erase” Iran’s role in the bombing at the AMIA community center offices in which 85 people were killed. He had said he wanted to question the president and other officials whom he claimed were involved in the cover-up.

Nisman claimed that the president had decided to “not incriminate” former senior Iranian officials for their roles in planning the bombing, and instead has sought a rapprochement with Tehran, “establishing trade relations to mitigate Argentina’s severe energy crisis,” the Buenos Aires Herald reported.

When her agreement with Iran was challenged in the Argentinean courts, “and here is the criminal (aspect), the president ordered to divert the investigation, abandoning years of a legitimate demand of justice, and sought to free the Iranians imputed (in the case) from all suspicions, contradicting their proven ties with the attack.

“The president and her foreign minister took the criminal decision to fabricate Iran’s innocence to sate Argentina’s commercial, political and geopolitical interests,” the newspaper quoted Nisman as alleging.

Last May, an Argentine court declared unconstitutional an agreement between the Argentinian government and Iran to jointly probe the 1994 bombing of the Buenos Aires Jewish center. The agreement had been approved in 2013 by Argentina’s congress, at the request of the executive branch. Nisman consistently argued that the agreement constituted “undue interference of the executive branch in the exclusive sphere of the judiciary.”

Prosecutor Nisman traced the authorization for the July 18, 1994, terrorist attack to a meeting of Iran’s National Security Council held a year before, and compiled sufficiently compelling evidence of Iran’s role in the crime as to have several leading Iranian figures, including Vahidi and former presidential candidate Mohsen Rezai, placed on an Interpol “red notice” list. The final decision to attack the AMIA center was allegedly made by Supreme Leader Ayatollah Ali Khamenei and then-president Rafsanjani.

The specific motivation for the 1994 AMIA bombing, according to Nisman, was to punish Argentina for suspending its nuclear cooperation with Iran.

*  *  *
Finally, as AP adds, “He was alone in the apartment,” prosecutor Viviana Fein told reporters. “There are no witnesses.”

The Clarin daily reported just a few days earlier that Nisman had told the newspaper, “I could end up dead because of this.” Nisman, in a separate TV interview, had also been considering increasing his security detail.